By Tom Hayden, published on the author’s website, ‘The Peace and Justice Resource Center’, August 16, 2013

When Secretary of State John Kerry described Egypt’s military coup as restoring democracy, it was a classic example of the periodic bond that exists 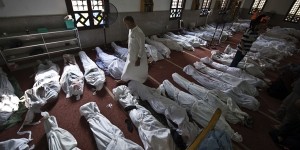 Victims of Egypt’s military coup, in a Cairo mosque

between liberals and military dictators against those they perceive to be the dangerous classes. Their reasoning is that their version of democracy can only be restored when their enemies are eliminated, even if the enemy has won an election.

See also Tom Hayden’s July 4 article, The coup in Egypt: An Arab winter?. Tom Hayden is a guest speaker at the Aug 24 rally in Vancouver initiated by Egyptian-Canadians to condemn the July 3 military coup and defend the victims of its horrific violence.

Think of the CIA overthrows of Iran’s Mohammad Mossadegh (1953) and Guatemala’s Jacobo Arbenz (1954), or the clandestine US overthrow of Salvador Allende in Chile (1973) and of Algeria’s slaughter of Islamists in the Nineties when they were on the brink of electoral victory. Think of the persistent discrediting and attempted coup against the elected Chavistas in Venezuela, the coup against Manuel Zelaya in Honduras, and the US ouster of Jean-Bertrande Aristide in Haiti. These are not isolated instances, but a pattern that has lead to the bloodshed in Cairo today. Movements inimical to Western interests cannot be allowed to peacefully come to power through elections. If they do, they will be targeted for destabilization or worse.

The Egyptian coup, for now, marks a dead end for political Islam, and a vindication of those like Al Qaeda who reject the path of democratic elections as a deadly trap. It alsopleases Syria’s dictator Bashar al-Assad, who was strongly opposed by Morsi. Assad said that the Brotherhood is unfit to rule. (New York Times, July 5, 2013) The Israelis were “quietly pleased” with the coup, too. The monarchs of Saudi Arabia and the Emirate are deeply satisfied. (New York Times, August 17, 2013)

In Egypt, thousands are being slaughtered by a military fully funded and trained by the United States government. The Egyptian generals’ coup – which, shamefully, has not been named a coup by our government or mainstream media – was welcomed with joy, even delirium, by many in Egypt who failed to win the elections, in particular by Egypt’s secular liberals and progressives. Did they think that tanks and bayonets could construct a liberal society? The generals clearly used the liberals – and a mass popular base of frustration – while planning to proceed with the slaughter.

Mohamed Morsi and the Brotherhood are authoritarian in nature because of eighty years of brutal prosecution by Egyptians rulers with US support. But they cannot be faulted for playing by the rules of Egypt’s electoral system, one in which Morsi won nearly 52 percent of the vote. Morsi’s worst excess was his failed attempt to circumvent the Hosni Mubarak judiciary and place his constitutional reforms on the ballot. That was a power grab away from Mubarak’s judges in the direction of a democratic election. The history of Chicago politics is littered with far worse.

Morsi represented a shift toward the Palestinians diplomatically and politically, but not militarily, and a softer policy toward Sinai’s tribal insurgents. He supported jihad against Syria’s Assad, but avoided prosecuting the Egyptian generals, even protected the military’s budget from parliamentary oversight.

In losing the election to Morsi, the secular liberals were to blame for their own divisions and marginal electoral status. The Facebook Generation wildly overestimated their support. They confused a media strategy with a political one, believing that the spectacle of bravely occupying Tahrir Square would not only appeal to CNN viewers but Egypt’s millions of voters who lived and worked far from the Square. Their radical strategy of “occupying space”, copied by many around the world, galvanizes media attention to the spectacle, but led to a deeper polarization while draining resources and attention away from broad-based organizing to explain and protect the cause. Their implicit critique of Mubarak and the Brotherhood as being essentially the same has proven to be a disastrous mistake in judgment.

President Barack Obama could have sent a clear and immediate signal to the generals through Kerry and Defense Secretary Chuck Hagel: We will not support you. This is a coup and, under American law, our $1.5 billion in military aid will be suspended. Period.

Had Obama done so, perhaps the generals would have blinked, or delayed their intended massacre. Or perhaps they would have gone ahead with their slaughter funded by the monarchs of Saudi Arabia and the United Arab Emirates, who recently gave the military junta $8 billion in emergency aid.

US officials argue that Egypt’s military is a strategic ally for reasons that deserve congressional hearings and urgent re-examination.

Defenders of the coup say that the Egyptian military, from Mubarak to the present, has been a cornerstone of the Global War on Terrorism and the wars in Iraq and Afghanistan. The Egyptians permitted airspace and the expedited use of the Suez Canal as conduits for American troops and equipment. Unmentioned is Egypt’s willing collaboration in US rendition and torture programs. Those are good reasons to re-examine the US-Egyptian partnership because torture turned into a global scandal and the wars themselves into trillion-dollar quagmires. Those in the American national security establishment who concocted these follies should take responsibility for their disastrous thinking, but instead remain protected and immune from personal consequences – which only guarantees that the future follies will be perpetuated.

The other rationale for supporting Mubarak and the current coup is that a repressive crushing of the Brotherhood is good for Israel. Since the 1979 Camp David Treaty between Israel and Egypt, the Egyptian military has been paid $1.5 billion annually to abandon any military support for the Palestinians. The Israelis lobbied Obama and Congress to keep propping up the Mubarak dictatorship, which Obama resisted. But the Israelis also are closely tied to General Abdel Sisi from his previous role in charge of Egypt’s intelligence services. In recent days, according to the New York Times, Sisi “appeared to be in heavy communication with Israeli colleagues, and [US] diplomats believed the Israelis were also undercutting the Western message by reassuring the Egyptians not to worry about American threats to cut off aid.”

That is because Tel Aviv believes that AIPAC controls the US Congress. When Senator Rand Paul offered an amendment on July 31 opposing US aid to the coup generals, the Senate turned it down on an 86 to 13 vote, with leading senators echoing an AIPAC letter.

Israel may think its security interests are protected by the coup and the violent demise of the Brotherhood, but that is short-term thinking at best. If the Arabs are killing each other, so goes the neo-con refrain, it’s good for Israel. Now, however, Israel faces a neighboring civil war, one that might spill over the border, including an insurrection in the Sinai Peninsula.

The Israeli-Palestinian peace talks seem only to be a public relations gesture designed to prevent the Palestinians from taking their quest for sovereignty to the United Nations in September. With wars flooding through the Middle East, and with the Palestinians themselves divided, progress toward a Palestinian state seems blocked.

The future is completely unpredictable for now. The generals will continue their war to exterminate the Brotherhood, unless checked by internal resistance and outside pressure. Instead of an avenue forward for political Islam, the future appears to be Algeria, where only military massacres prevented Islamists from taking power through democratic elections. Algeria today, like Egypt, is a mainstay of the most extreme repression, including torture, in the arsenal of the Global War on Terrorism.

How long can this go on? No one knows, but it could be a long time, a surge of renewal for the sagging War on Terrorism. Much depends on liberalism rethinking itself. Mohamed ElBaradei, the liberal who became Sisi’s vice president with American support, has resigned after the latest army massacre of Brotherhood members. Perhaps more defections will follow, though the damage has been done. The Brotherhood, which survived underground for eighty years, is likely to regroup and resist. Widespread sabotage, assassination of police and army officers, and rural guerrilla warfare are probable scenarios, unless the US acts quickly to suspend military aid, which is required under American law. A suspension of aid – coupled with warnings to Saudi Arabia and the Emirates – seems the only way to stop the generals. Instead of the failed liberal strategy of “working from within” to reform the military dictatorship, only the opposite course offers possibilities: a suspension of US aid coupled with the release of Brotherhood prisoners and a UN-sponsored conference aimed at reviving a constitutional process.

Obama is more likely to continue ignoring American law than pursue a showdown with the Egyptian military. His Cairo speech, call for Mubarak’s resignation, and acceptance of Morsi’s election indicates that the president believes in a political role for Islam, contrary to many of his close advisers and allies. For now, the establishment has described Obama as being in a “no win” situation. Events still might force his hand, but not if liberal voices continue believing that democracy still lies just ahead beyond the mountain of bodies.