Egypt on Aug 14, 2013: ‘Worst attack on civilians’ in the history of the country

The Guardian is reporting live from Cairo, including world reaction, as the Egyptian military has launched a bloody crackdown on the street camps that have been protesting the July 3 military coup in Egypt. Al Jazeera is also reporting live. A full military assault on the camps began this morning at 6 am local time. 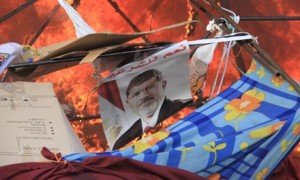 Flames at the Rabaa al-Adawiya camp in Cairo

Egypt’s health ministry is reporting, most recently, 149 people dead and hundreds more injured. International media are also reporting death and injury tolls. All train service in Egypt has been halted. The Egyptian government has declared a month-long national state of emergency, and nighttime curfews have been declared.

The two main camps that were assaulted are located near the University of Cairo and around the Rabaa Mosque in the east of the city.

A Sky News (UK) correspondent wrote, “Egypt violence is not a crowd clearing operation, it is a major military assault largely on unarmed civilians.”

Mohamed Soltan, a member of the anti-coup alliance in Egypt, has been reporting to Al Jazeera. He forwards a tweet from one of the camps saying, “They are burning this place down with no regard for human life.” (Photo here.)

Citizen journalists on the scene report that people with video cameras are being targeted by gunfire from police and soldiers. One of those dead is 61 year old Mick Deane, a cameraman with Sky News. Many journalists have been arrested and their equipment confiscated.

Protesters have been killed in the city of Suez as they react to the news from Cairo. In Cairo, people moved towards the camps to try and repel the military assault, but latest news has the military occupying the camps that were the hub of the protest movement.

The Guardian’s Patrick Kingsley has reported:

At the Rabaa al-Adawiya camp, the immediate reaction to the emergency law has been one of derision. “On 25 January 2011, we went out and refused Mubarak – and one of the things we refused was his emergency law,” said Ahmed Khadr, an engineer on the fringes of the sit-in who said he supported the protesters, but not Morsi’s presidency.

“We continue to refuse it, and all other forms of oppression. The people enforcing it are Mubarak’s men.”

Nearby, Amar Ali – a former network administrator in Morsi’s office, prior to his overthrow – promised to reject the law’s restrictions.

“We will remain on the streets regardless of the emergency law. The law will make people angrier.”

Indeed, Al Jazeera reports that protesters remain in the streets in areas of the city, defying the curfew. 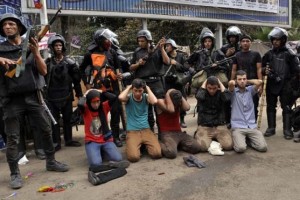 Arrests during massacre by military in Cairo Aug 14, 2013

The U.S. government has issued a statement, feigning concern about the crackdown. The statement was issued by a press spokeperson; President Obama is on holiday and was busy playing a game of golf. The statement urged “both sides” to cease their violence.

The French and British governments say they condemn the use of force to close the protest camps and call on “all sides” to cease violence.

“Vice president” of the coup regime Mohamed El Baradei, has resigned, saying he disagrees with the crackdown decision. He is a leader of the pro-coup National Salvation Front of political parties.

The Guardian is tracking the people killed by the military since last June. You can read its findings here.

As reported on Al Jazeera, nineteen of 25 governors appointed yesterday by the military regime are generals, former generals or former judges of the Mubarak regime.

On July 4, one day following the military coup in Egypt, I wrote, “Yesterday’s military coup in Egypt presents a difficult challenge to progressive forces in that country. Much of the protest movement against the authoritarian rule of President Mohamed Morsi, elected last year, has welcomed the coup. But it will come to rue the day it came to rely on the military to deal with its grievances against Morsi, for there is nothing in the past year to suggest that anything has changed in the military hierarchy that the vast majority of Egyptians came to loath during the long, dark years of the rule of former president Hosni Mubarak.”

Egypt has returned to the rule of the regime that the country thought it had ousted in January 2011. The sad fact is that many of those who protested the elected government of the Muslim Brotherhood-led Freedom and Justice Party have welcomed the effective return to military rule. Others wrongly believed that a military coup could lead to a “second revolution” that could carry forward the undoubted wish of a large part of Egyptian society for a society of democracy and social justice.