Dossier on the Sandinista national election triumph in Nicaragua on Nov 7, 2021 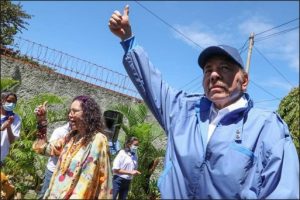 The following is a listing of news headlines and recommended analysis of the national elections which took place in the Central American country of Nicaragua on November 7, 2021. The country held elections to the presidency, National Assembly and Central America Parliament. There was a high voter turnout and incumbent president Daniel Ortega won an overwhelming re-election victory.

As many of the enclosed articles explain, the people and government of Nicaragua have for several years been a target for ‘regime change’ by the wealthy ruling classes in the United States, Europe and Canada. These big powers have imposed sanctions on the country and, like Venezuela, have brandished the threat of military intervention on top of that. Why? Because the country has set a ‘bad example’ under the government led by the Sandinista National Liberation Front (FSLN). Government policies have created greater social equality for its citizens and more equality for its Indigenous peoples. The Nicaraguan people take pride in their government having the will and the capacity to speak out against the capitalist world disorder.

The government’s and peoples’ successes in combatting the coronavirus pandemic are an especially sharp embarrassment to the aforementioned great powers. Their policies of Covid negligence have cost the lives of millions. And not only the lives of those in their home countries–also in the less developed countries that have been outrageously excluded from equitable access to Covid vaccines.

Disappointingly, the government of Nicaragua has many detractors among the political left in the aforementioned imperialist countries. This article from late-August 2021 provides a summary of this disturbing reality:  Ordinary Nicaraguans should guide the stance of the progressive left in the West, by John Perry, in LA Progressive, Aug 29, 2021.

Why has this political left failed the Nicaraguan people? (I leave aside the views of social democrats and other social conservatives for whom radical social change is anathema, to be avoided at all cost). The answer lies, in part, in the ultraleft origins of much of this political left and its subsequent degeneration over the decades since the end of World War Two and then the rise of globalized capitalism (falsely labeled ‘neoliberalism’) in the mid-to-late 1970s. Flowing from this is the very bad practice of measuring existing social transformations–be they in Nicaragua, Venezuela, China and even Cuba–by the standards of a ‘perfected socialism’. Such a socialism is impossible to achieve in a world still dominated by imperialism along with its economic embargoes and war threats. Yet that doesn’t stop the left critics in the Western countries from applying such a measure.

Socialism is much more than a utopian ‘ideal’ to which to aspire. It is the class struggle of poor against rich/defenders of the Earth against corporate raiders and pillagers. This class struggle for socialism is what shapes historical development. It has proven to be long and difficult, with many ups and downs and partial achievements along the way.

The whole subject of the Western political left and its evolution is explored in many of the entries in the Editor’s comments page of A Socialist In Canada. See the latest story entry there, on ‘Russiagate’, dated Nov 7, 2021.

*  Sandinistas win by a landslide! U.S. dirty tricks fail in derailing Nicaragua’s democracy, feature report by Nan McCurdy, Covert Action Magazine, Nov 9, 2021  …I am one of 67 international journalists who covered the elections. There are also 165 people from 27 countries accompanying the elections. We went to Nicaragua’s 15 departments and two regions…
*  I monitored the U.S.-denounced Nicaraguan election; people believe in the Ortega government, commentary by Daniel Kovalik (University of Pittsburgh School of Law), published in RT, Nov 7, 2021 …According to preliminary results, over 65 percent of voters turned out, 75 percent of whom cast their ballots on November 7 for Sandinista leader Daniel Ortega, securing him a fourth consecutive presidential term… The election was as much about rejecting foreign meddling as anything else. This is why the U.S. government and media are so apoplectic about the results…
* Nicaragua’s Nov 7 elections are a referendum on social investment policies, by John Perry, with Patricia Ruiz, Winnie Narvaez, and Yorlis Luna, published by NACLA, Nov 6, 2021 and re-published in Tortilla con sal (Nicaragua)
* Sandinistas poised to win election in Nicaragua despite U.S. sabotage and smears, lengthy analysis by Yader Lanuza (U. of California, Santa Barbara), published in Covert Action Magazine, Nov 6, 2021 …The people and organizations in the West spewing anti-Sandinista reports have taken it upon themselves to speak on behalf of Nicaraguans, whom they claim live in some sort of authoritarian nightmare that only U.S. intervention and the “international community” can fix. Inside Nicaragua, however, something else is afoot. The country is peaceful, getting ready for year-end activities that begin in November. People are going about their everyday business with interest but not obsession with the elections, as usually occurs in the U.S. Poll after poll is showing majority support (about 2/3) for the Sandinista National Liberation Front’s ticket, with Daniel Ortega at the helm. In the North of the country, the support is even higher…
*  The Facebook team that tried to swing Nicaragua’s election is full of U.S. spies, by Alan Macleod (staff writer), Mint Press News, Nov 8, 2021  A tacit agreement between the U.S. government and Facebook appears to have been made: ‘you can keep the profits, but we control the message’. As such, a cynic might wonder what functional difference there is between Facebook and the national security state.
* Facebook does the U.S. government’s censorship work in Nicaraguan elections, by John Perry, in Masala, Nicaragua, published by the Council on Hemispheri Affairs (COHA), Nov 3, 2021
* From Nicaraguan revolutionaries to U.S. embassy informants: How Washington recruited ex-Sandinistas like Dora María Téllez and her MRS party, by Ben Norton, The Grayzone, Nov 3, 2021
* Pro-Sandinista social media accounts blocked days ahead of Nov 7 elections in Nicaragua, by Ben Norton, The Grayzone, Nov 3, 2021 (also appearing in Consortium News) Facebook, Instagram, and Twitter suspended hundreds of influential pro-Sandinista journalists and activists days before Nicaragua’s November 7 elections, falsely claiming they were government trolls. The Grayzone interviewed them to reveal the truth.
* Nicaragua’s rainforest and indigenous peoples: A story of falsehood, lies and U.S.-based political campaigns, by John Perry, in Masala, Nicaragua, published by the Council on Hemispheric Affairs (COHA), Sep 24, 2021 (and re-published in LA Progressive)

And here is how state and corporate media in the West are reporting the elections in Nicaragua:
* Nicaragua’s Ortega leads in vote tally after jailing rivals, Associated Press, Nov 8, 2021
* Nicaragua descends into autocratic rule as Ortega crushes dissent, New York Times, Nov 7, 2021
* Nicaragua’s Ortega a lock for relection after jailing opponents, Washington Post, Nov 5, 2021
*  Daniel Ortega set to win Nicaraguan election denounced as sham, The Guardian, Nov 8, 2021
* Meet the musician singing against Nicaragua’s ‘apocalyptic’ regime, The Guardian, Nov 6, 2021 [Even more than in U.S. corporate media, the pages of the UK Guardian are positively overflowing with anti-Nicaragua and pro-Western propaganda. The Guardian item above is but one example.]