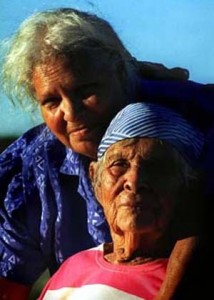 The Australian Aboriginal author on whose book the 2002 film ‘Rabbit-Proof Fence‘ was based has died. Doris Pilkington Garimara was 76 and died in Perth on April 10.

Pilkington Garimara was one of the approximately 100,000 children of mixed Aboriginal and white ancestry in Australia who over the course of 60 years were taken from their homes and reared in isolated settlements under the terms of the 1905 Aborigines Act, a policy of forced assimilation. They were the ‘Stolen Children’ or ‘Stolen Generations’ of Australia.

Pilkington Garimara published ‘Follow the Rabbit-Proof Fence’ in 1996. It’s the saga of her mother’s escape from one such settlement.

In 1931, her mother, Molly Craig (nee Kelly), born into the Mardudjara people, was taken at the age of 14 from Jigalong in the northwest corner of Western Australia and sent to the remote Moore River Settlement near Perth, more than 1,000 miles away to the south and west. It was a welfare camp for Aboriginals of all ages.

The film tells the moving story of how Craig and her younger sister Daisy Burungu, eight, and cousin Gracie Fields, eleven, escaped and walked home, first by walking east to the north-south rabbit-proof fence in Western Australia, then north, ‘following the rabbit proof fence home’.

The fence was built in several lengths by Australian settlers between 1901-07 to prevent the invasive rabbit population that plagues Australia to this day from reaching the pasturelands in the very west of the country. When completed in 1907, No. 1 Fence was the longest unbroken fence in the world at 1,139 miles or 1,833 km (see map here).

Gracie left the two other girls during the walk home in order to search for her mother. She was recaptured and returned to Moore River. The three reunited 30 years later. Molly and Daisy returned to live in Jigalong in later life.

Molly Craig was taken to the Moore River Settlement again in 1940, this time after she had married and had two young daughters. She ran away again in 1941, carrying 18-month-old Annabelle and leaving Doris, four, to fend for herself with a relative’s help. They did not reunite until 21 years later.

Of her own upbringing by Anglican missionaries, Pilkington Garimara  wrote, “We were told that our culture was evil and those that practised it were devil worshippers. The blacker your skin was, the worse individual you were.”

Annabelle was seized in 1943 and declared an orphan. Molly never saw her again. Doris said Molly asked after Annabelle every year on Annabelle’s birth date. In 2003, after the release of the film, Annabelle sent gifts to Molly, delivered by her daughter Helen.

Some Australian critics of the film ‘Rabbit Proof Fence’ quibbled with the dramatic license it took. A magical moment appears in the film at the end–the elder Molly, Daisy and Gracie appear, smiling, in real-life footage.

Doris Pilkington Garimara is survived by four children, 31 grandchildren and 80 great-grandchildren. Two other daughters predeceased her. In the words of an Australian resident leaving a comment to an obituary in The Telegraph (UK) of May 1, “Rest in peace, Doris. Your contribution to Australia, to reconciliation and to humanity has been immeasurable.

Read an obituary of Doris Pilkington Garimara in the The Telegraph (UK), May 1, 2014.

This article was first published on The Vancouver Observer, May 3, 2014.