Here are two articles from the Rabkor (“Worker Correspondent”) site, www.rabkor.ru, May 27, 2014, translated by Renfrey Clarke. 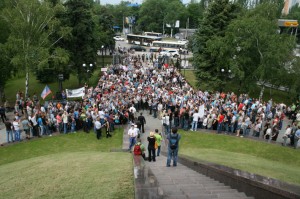 Coal miners rally in the city of Donetsk on May 28, 2014 demanding an end to the military interventions by the Kyiv regime

Coal miners in the Donbass region have declared an indefinite strike, demanding an end to armed operations in the south-east and the withdrawal of Ukrainian government forces from Donetsk Province.

Taking part in the protest action have been the Skochinsky, Abakumov, Chelyuskinsky and Trudovskaya mines, along with two mines in the city of Makeevka. This is among the contents of a statement issued by First Deputy Minister of the Coal Industry of the Donetsk People’s Republic (DPR) Konstantin Kuzmin,and reported by ITAR-TASS. According to Kuzmin, other mines will join the strike in the near future.

Earlier, a spokesperson for the Ukrainian armed forces, Aleksey Dmitrashkovsky, declared that operations in Donetsk would continue until all forces of the Donetsk People’s Republic had been eliminated.

It is now reported that military actions have been renewed in the area of Donetsk International Airport, and that all roads leading to and from Donetsk have been blocked by Ukrainian forces. Educational institutions in the city are being evacuated. Announcements have been sent to all municipal service offices warning of the need to prepare bomb shelters in which people can take refuge if armed clashes occur or if bombing takes place.

From the Rabkor (“Worker Correspondent”) site, www.rabkor.ru. Translated by Renfrey Clarke, May 28, 2014.

Around three thousand workers from Donetsk coal mines took part on May 28 in a “March for Peace” against the continuation of military operations. The action took place under the slogan “Fascism will not pass!” At 10 a.m. (11 a.m. Moscow time) the miners gathered for a demonstration at the eternal flame and memorial to the victims of fascism. From there, they moved in a column to Lenin Square in the centre of Donetsk.

Taking part in the action were workers from the Chelyuskintsy, Skochinsky, Yuzhno-Donbass 3, Abakumov and Trudovskaya mines. Minister of the Donetsk People’s Republic (DPR) Boris Litvinov came out to support the miners.

As the miners explained to RIA-Novosti, some of them support the DPR and others not. Nevertheless, all of them were calling for an end to the military actions in Donetsk that have caused the deaths of several dozen peaceful residents, not counting militia members.

Meanwhile, renewed gunfire was heard from the area of Donetsk International Airport. Members of the DPR militia reported that they had succeeded in shooting down a drone aircraft. According to information from the self-defence forces, the terminal and perimeter of the Donetsk airport are under their control. Toward evening shooting in the region of the airport began once again.

Gunfire was also heard around midday in the vicinity of the provincial command centre of the Unrainian Security Service (SBU) on Shchors Street in Donetsk. This was reported on the official site of Donetsk Mayor Aleksandr Lukyanchenko. Around 1 p.m. the shooting died away.

Around noon, the city of Slavyansk again came under artillery fire from the Ukrainian army. One of the residential microdistricts was subjected to intensive shelling. One shell landed in the yard of school no. 13. Some 20 metres from the school is a kindergarten. There are no reports of children being killed or wounded, but the Ukrainian Channel 5 stated that at least ten peaceful residents were wounded as a result of the shelling.

A representative of the special forces taking part in the operation, Vladislav Seleznev, later told journalists that government forces had put out of action a “Nona” self-propelled artillery piece with which militia members had been firing on army positions. The self-defence forces themselves, however, did not confirm this report.

As a result of regular artillery fire, several dozen private houses have already been destroyed in Slavyansk, especially in the suburbs of Andreevka and Sergeevka. Local residents take shelter from the bombardment in the cellars of their homes, but several dozen people have been wounded.

Nor are conditions quiet in Lugansk Province. On Tuesday night, fierce battles took place in the settlement of Rubezhnoe. “They started shooting at a residential area with explosive bullets,” one of the Rubezhnoe militia members said. “People hid in their cellars. The National Guard obviously aren’t aware that explosive bullets are banned under the international convention.”

Armoured vehicles took part in the attack, and there was shelling from artillery and mortars. Nevertheless, the Lugansk Republic militia members were able to stop the soldiers from advancing beyond this particular sector. The clashes came to an end at 3 a.m., and details of casualties have not been received.