Documentary film by Estela Bravo, 2001, 91 minutes, English and Spanish with English sub-titles, watch here on YouTube or by clicking on screen below 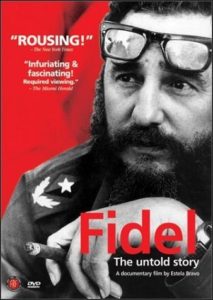 From the film promotion: ‘Whether dismissed as a relic or revered as a savior, all agree that Fidel Castro, nearing 44 years as the leader of Cuba, is one of the most influential and controversial figures of our time. Rarely are Americans given a chance to see inside the world of this socialist leader. The new documentary film ‘Fidel: The Untold Story’ by Estela Bravo offers a unique opportunity to view the man through exclusive interviews with Castro himself, historians, public figures and close friends, with rare footage from the Cuban State archives.’

‘After previewing the film, I have only one piece of advice: see it. Really. It makes no difference whether you’re for or against Castro, Estela Bravo presents us with a piece of history that we owe it to ourselves to see. Estela Bravo’s ‘Fidel’ is the definitive word to date on Castro…’