Do the ‘free markets’ of globalized capitalism work for the world?

By Michael Roberts, published on his website The Next Recession, Nov 27, 2017

Noah Smith is a regular economics blogger of the mainstream Keynesian persuasion and writes regularly for Bloomberg News. A recent piece by him was headlined “free markets improved more lives than anything ever”. And he delivered the now usual argument that capitalism has actually been a great success in delivering better lives for billions compared to any previous mode of production and social organisation and, as far as he can see, it will remain the ‘market leader’ for human beings. 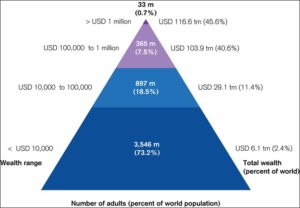 Smith is keen to refute the ‘mixed economy’, anti free trade ideas that have been sneaking into mainstream economics since the Great Recession, namely that ‘neo-liberalism’ and free markets are bad for living standards. Instead, a little dose of protectionism on trade (Rodrik) and state intervention and regulation (Kwak) helps capitalism to work better.

But no, says Smith. Neoliberalism works better. He cites China’s growth phenomenon as his main example! In China, “the shift from a rigid command-and-control economy to one that blended state and market approaches — and the liberalization of trade — was undoubtedly a neoliberal reform. Though Deng’s changes were mostly done in an ad-hoc, common sense manner, he did invite famed neoliberal economist Milton Friedman to give him advice.”

He then adds India to this argument: “A decade after China began its experiment, India followed suit. In 1991, after a sharp recession, Prime Minister Narasimha Rao and Finance Minister Manmohan Singh scrapped a cumbersome system of business licensing, eased curbs on foreign investment, ended many state-sanctioned monopolies, lowered tariffs and did a bunch of other neoliberal things.”

Boy, does this take the biscuit.  China’s economy is an example of successful neoliberal economic policy!?  In several posts I have shown that China is not a free market economy by any stretch of the evidence and may not even be described as capitalist.  It is state-owned and controlled with investment and production state-directed, with profit secondary to growth as the objective.  Indeed, the IMF data on the size of public investment and stock globally put China in a different league compared to any other economy in the world.

As for India, the state sector also remains significant, something which continually upsets the World Bank and neoliberal economists. The policy measures of the 1990s can hardly be used as the explanation of the pick-up in economic growth in India. During the 1990s, productivity growth in all the major ‘emerging economies’ picked up – only to fall back again after the Great Recession. Globalisation and foreign capital were drivers then everywhere.

Anyway it is not really true that Indian government policy is ‘neo-liberal’ – on the contrary. In contrast, the clear shock switch to neoliberal capitalism by Russia’s post-Soviet governments and its oligarchs was a total disaster (Smith calls it a ‘mixed success’!). Growth, living standards and life expectancy collapsed. Indeed, the conclusion that might be drawn is not that ‘neo-liberal reforms’ have driven the relative economic success of China and India in the last 30 years but their resistance to such policies.

The other main argument presented by Smith for the success of capitalism is the supposed decline in global poverty since Marx wrote Capital 150 years ago. “All of the evidence above suggests that the population living in extreme poverty has fallen very substantially in the last 200 years across the world. As we have noted, on aggregate, the global population in extreme poverty went from 80 per cent in 1820 to 10 per cent in the latest estimates.”

Now, Marx was the first to note the tremendous boost to production that the capitalist mode of production delivered compared to previous modes. But as I have shown in previous posts, there is another side to capitalism’s early years: the immiseration of the working class. And that is a different reality from Smith’s claims.

Back in 2013, the World Bank released a report that there were 1.2bn people living on less than $1.25 a day, one-third of whom were children. The World Bank raised its official poverty line to $1.90 a day and Smith refers to sources based on this threshold. This merely adjusted the old $1.25 figure for changes in the purchasing power of the US dollar. But it meant that global poverty was reduced by 100m people overnight.

And, as Jason Hickel points out, this $1.90 is ridiculously low. A minimum threshold would be $5 a day that the US Department of Agriculture calculated was the very minimum necessary to buy sufficient food. And that’s not taking account of other requirements for survival, such as shelter and clothing. Hickel shows that in India, children living at $1.90 a day still have a 60 per cent chance of being malnourished. In Niger, infants living at $1.90 have a mortality rate three times higher the global average.

In a 2006 paper, Peter Edward of Newcastle University used an “ethical poverty line” that calculates that, in order to achieve normal human life expectancy of just over 70 years, people need roughly 2.7 to 3.9 times the existing poverty line. In the past, that was $5 a day. Using the World Bank’s new calculations, it’s about $7.40 a day. That delivers a figure of about 4.2 billion people living below that level today; or up 1 billion over the past 35 years.

Some argue that the reason there are more people in poverty is because there are more people! The world’s population has risen in the last 25 years. You need to look at the proportion of the world population in poverty and, at a $1.90 cut-off, the proportion under the line has dropped from 35 per cent to 11 per cent between 1990 and 2013. So Smith is right after all. But this is disingenuous, to say the least.

The absolute number of people in poverty, even at the ridiculously low threshold level of $1.25 a day, has still increased, even if not as much as the total population in the last 25 years. And even then, all this optimistic expert evidence is really based on the dramatic improvement in average incomes in China (and to a lesser extent in India).

Smith says that “the reduction of global poverty has been substantial even when we do not take into account the poverty reduction in China. In 1981, almost one third (29 per cent) of the non-Chinese world population was living in extreme poverty. By 2013, this share had fallen to 12 per cent.“

However, Peter Edward found that there were 1.139bn people getting less than $1 a day in 1993 and this fell to 1.093bn in 2001, a reduction of 85m. But China’s reduction over that period was 108m (no change in India), so all the reduction in the poverty numbers was due to China. Exclude China and total poverty was unchanged in most regions, while rising significantly in sub-Saharan Africa. And, according to the World Bank, in 2010, the “average” poor person in a low-income country lived on 78 cents a day in 2010, compared to 74 cents a day in 1981, hardly any change. But this improvement was all in China and India. In India, the average income of the poor rose to 96 cents in 2010, compared to 84 cents in 1981, while China’s average poor’s income rose to 95 cents, compared to 67 cents.

Moreover, poverty levels should not be confused with inequality of incomes or wealth. On the latter, the evidence of rising inequality of wealth globally is well recorded . The latest annual report by Credit Suisse on global personal wealth [165 pages] found that top 1 per cent of personal wealth holders globally now have over 50 per cent of the world’s wealth – up from 45 per cent ten years ago. Actually, the majority of people in the major advanced capitalist economies will be in the top 10 per cent of wealth holders because billions of people have no wealth at all!

Credit Suisse found that global wealth rose 6.4 per cent over the past year – the fastest since 2012 – thanks to rising share markets and house prices. But the weakest growth was in Africa, the poorest region, where household wealth rose just 0.9 per cent. Taking in into account population changes, wealth per adult fell by 1.9 per cent in Africa. The fastest growth was in North America, where it rose 8.8 per cent per adult.

And on current trends, inequality will rise further. The outlook for the millionaire segment looks much better than for the bottom of the wealth pyramid (less than $10,000). The former is expected to rise by 22 per cent, from 36 million millionaires today to 44 million in 2022, while the group occupying the lowest tier of the pyramid is expected to shrink by only 4 per cent. In the US, the three richest people in the US – Bill Gates, Jeff Bezos and Warren Buffett – own as much wealth as the bottom half of the US population, or 160 million people.

As for incomes, if you take China out of the figures, global inequality, however you measure it, has been rising in the last 30 years. The global inequality ‘elephant’ presented by Branco Milanovic found that the 60m or so people who constitute the world’s top 1 per cent of income ‘earners’ have seen their incomes rise by 60 per cent since 1988. About half of these are the richest 12 per cent of Americans. The rest of the top 1 per cent is made up by the top 3-6 per cent of Britons, Japanese, French and German, and the top 1 per cent of several other countries, including Russia, Brazil and South Africa. These people include the world capitalist class – the owners and controllers of the capitalist system and the strategists and policy makers of imperialism.

But Milanovic also found that those who have gained income even more in the last 20 years are the ones in the ‘global middle’. These people are not capitalists. These are mainly people in India and China, formerly peasants or rural workers have migrated to the cities to work in the sweat shops and factories of globalisation: their real incomes have jumped from a very low base, even if their conditions and rights have not. The biggest losers are the very poorest (mainly in African rural farmers) who have gained nothing in 20 years.

The empirical evidence supports Marx’s view that, under capitalism, poverty (as defined) and inequality of income and wealth have not really improved under capitalism, neoliberal or otherwise. Any improvement in poverty levels globally, however measured, is mainly explained by in state-controlled China and any improvement in the quality and length of life comes from the application of science and knowledge through state spending on education, on sewage, clean water, disease prevention and protection, hospitals and better child development. These are things that do not come from capitalism but from the common weal.

So Marx’s prediction 150 years ago that capitalism would lead to greater concentration and centralisation of wealth, in particular, the means of production and finance, has been borne out. Contrary to the optimism and apologia of mainstream economists like Smith, poverty for billions around the world remains the norm, with little sign of improvement, while inequality within the major capitalist economies increases as capital is accumulated and concentrated in ever smaller groups.