Difficult truce talks in Mali as France/U.S. press for holding of national election 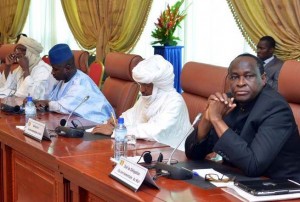 THE lead mediator in Mali peace talks left the Ouagadougou [Burkina Faso] venue yesterday to present a compromise deal to Malian President Dioncounda Traoré in Bamako, a member of his delegation said.

Burkinabe Foreign Minister Djibril Bassole left aboard a United Nations (UN) aircraft for the Malian capital to meet Mr Traoré, “to lift the final obstacles” to a deal between the government and northern Tuareg rebels, the source said. UN, African Union, European Union and French diplomats accompanied Mr Bassole on the journey to the neighbouring West African country.

Tuareg rebels who control the key northern town of Kidal had been reluctant to let government troops step in to secure the town for a planned July 28 presidential ballot, but said on Tuesday they were prepared to sign a deal after a few amendments were made.

A source close to the government, which also wants to fine tune the deal, said it could be concluded by yesterday evening or today. Negotiations in Ouagadougou, the capital of neighbouring Burkina Faso, started on Saturday, after Mali’s army last week began advancing towards Kidal, the MNLA rebels’ last stronghold, in the remote northeast. This was the first direct fighting in months.

France launched a massive military campaign in January which broke al-Qaeda-linked Islamist fighters’ control over the northern two-thirds of Mali. However, it allowed the Tuaregs to regain control of their traditional fiefdom. Mali has made clear that it wants civil administration and the army to return to Kidal before elections scheduled for July 28, and had threatened to seize the town if no agreement was reached by Monday.

“On the point concerning the deployment of Malian armed forces in the region of Kidal, we have obtained an agreement in principle,” Mr Bassole said. “The two sides have requested a few hours to report back to their bases … in order to be able to come back tomorrow for the final adoption of this document,” he said.

For decades, Mali’s Tuareg community has demanded greater political autonomy from the southern capital of Bamako, and more spending on development for the impoverished region, which they call Azawad.

France, which is handing over to a UN peacekeeping mission due in Mali next month, has pushed hard for elections to go ahead, in order to seal a democratic transition. Mr Bassole said the agreement would establish a commission composed of both sides to monitor security and prepare for the army’s deployment in Kidal.

Long-term solutions to Tuareg independence demands are expected to wait until after the elections, since the interim government lacks the political authority to make a far-reaching deal with northern armed groups.

Kazura, formerly second in command of African Union troops in Sudan’s western Darfur region, will lead the UN force being deployed in Mali, known under the acronym MINUSMA. Foreign Minister Louise Mushikiwabo confirmed the appointment but gave no further details.

The UN Security Council in April approved the force for Mali, to be made up of 12,600 international troops and police to take over from French and African forces. In January, French troops halted an advance by Islamist guerrillas who had controlled the northern half of the country for 10 months in the chaos following a coup in Bamako.

Kazura, 50, fought in the 1990s in the ranks of the Rwandan Patriotic Front (RPF), the rebellion led by now President Paul Kagame, who took power in Kigali in 1994 to end the genocide in Rwanda. Kazura later ran Rwanda’s military academy and was a security adviser to Kagame.

A football fan, he has also headed Rwanda’s football federation. In 2010, he was briefly arrested for “insubordination” after travelling without permission in South Africa to watch the football World Cup.

Meanwhile, an investigation by Amnesty International has found that children as young as 13, who were recruited by armed groups during the country’s recent conflict, are now among the inmates crowding jails in Mali’s capital. Some have allegedly been tortured, the international rights group said in the report released Friday. [See full report further below in this posting.]

Amnesty’s team spoke to nine children between the ages of 13 and 17 who were held along with adults at the prison in Camp I of the gendarmerie in Bamako. One youth told Amnesty that he had been strung up to the ceiling and threatened with electric shocks.

The radical Islamists who overran northern Mali last year actively recruited children into their ranks, arguing that the Quran permitted them to do so. [????]

Mali’s interim president told international mediators on Wednesday he wanted changes to a proposed ceasefire deal with Tuareg separatist rebels, meaning talks will have to resume on Thursday in neighboring Burkina Faso.

An agreement to allow Mali’s civil administration and armed forces to return to the Tuaregs’ last stronghold of Kidal, in Mali’s remote northeast, is essential for presidential elections on July 28 needed to unlock billions of euros in donors’ pledges. The vote would complete a democratic transition [sic] after a military coup in March 2012 triggered by a Tuareg uprising that was soon hijacked by al Qaeda-linked groups. The Islamists’ 10-month domination of northern Mali was ended by a French-led military campaign launched in January.

Burkina Faso’s foreign minister, Djibril Bassole, had said on Monday that Mali’s government and the Tuaregs had reached an agreement in principle. Since then, Bamako has appeared reticent about a deal imposing conditions on its army’s return to Kidal.

International mediators — including representatives of the United Nations, the European Union and the AFISMAAfrican peacekeeping mission – held seven hours of talks with Mali’s interim president, Dioncounda Traore, in a fruitless bid to win his approval.

“The interim president of the republic explained the government’s point of view in detail and on the basis of that, we are going to continue negotiations in Ouagadougou,” said the head of AFISMA, Pierre Buyoya. “We have high hopes that in the coming days we will reach an agreement.”

The Malian government has threatened to seize Kidal if no agreement was reached in the talks. Its army, re-equipped after last year’s humiliating defeats by the Tuareg and Islamist rebels, advanced towards Kidal last week, overrunning [sic] the Tuareg MNLA separatist rebels in the first fighting in months.

There is widespread opposition in Bamako to any deal that would make concessions to the MNLA, whose leaders face arrest warrants in Mali for alleged crimes committed during their occupation of the north. “If politicians sign these deals, they will have to answer before history one day,” Mali’s public prosecutor, Daniel TessougÈ, said on Wednesday. “Mali must not humiliate itself again for the billions of euros promised by our international partners.”

International donors pledged 3.25 billion euros ($4.31 billion) last month to help Mali rebuild from the conflict, but the disbursement of the bulk of the money depends on the organization of elections.

France has pushed hard for elections to go ahead. It plans to hand over responsibility for internal security in Mali to a UN peacekeeping mission due to deploy next month.

Bassole said the draft agreement would allow the army to deploy to Kidal and called for the creation of a mixed commission composed of both sides to monitor security. The rebels would be confined to their quarters but would remain armed pending a final agreement on their demands for increased autonomy. They are expected to negotiate that after the elections.

Children in Mali conflict forced to fight, detained with adults and tortured

Children in Mali, some as young as 13, who were recruited as child soldiers by armed groups or suspected of links with them, are now being detained by Malian forces alongside adults, where some say they’ve been tortured, Amnesty International revealed after returning from a four-week visit to the country.

The organization’s delegates spoke to nine children between 13 and 17 years of age who were held with adults at the Maison centrale d’arrêt and at Camp I of the gendarmerie of Mali’s capital, Bamako, on suspicion of association with armed groups.

One of them, a 15-year-old shepherd, was arrested by Chadian forces in Intouké – in the northern Kidal region – and handed over to French forces. He said they did not ask for his age and did not interview him in his mother tongue, Tamasheq (a Tuareg language) before handing him over to the Malian gendarmerie in Bamako. During the plane transfer he was blindfolded and had his hands and feet tied.

Some of the children said they had being victims of torture or other ill-treatment by the Malian forces.

“Under international law, children should be detained separately from adults, and Malian law also prohibits detaining them with adults. The Malian authorities should give notice to the UNICEF when arresting children suspected of association with armed groups so that their families can be identified and their cases handled by child protection professionals,” said Gaëtan Mootoo, Mali Researcher at Amnesty International.

These children in detention have been charged with offences such as association with wrongdoers, rebellion, undermining internal and external state security and acts of terrorism.

Other children arrested for alleged links with armed groups were handed over to UNICEF via the Malian gendarmerie and the French forces.

Some of the children surrendered or were arrested by Malian, French or Chadian armed forces following the military operation launched in January this year to retake northern Mali from armed groups that took control of the region in April 2012.

Others have not yet been located, prompting concerns they might still be linked to armed groups or hiding in their communities for fear of reprisals or of being detained.

Since the beginning of the Malian conflict in January 2012, human rights organizations including Amnesty International have denounced the recruitment and use of child soldiers by armed groups and self-defence militias supported by the Malian authorities.

Amnesty International urged the Malian authorities, the MINUSMA (United Nations Multidimensional Integrated Stabilization Mission in Mali) and other UN agencies to reach out to local communities to ensure care for children now in hiding after allegedly joining armed groups. They must also develop programmes to reinsert and reintegrate former child soldiers.

The organization also called for the release of all children held by armed groups – including the Mouvement pour l’unicité du djihad en Afrique de l’ouest (MUJAO, Movement for Oneness and Jihad in West Africa) and the Tuareg Mouvement national de libération de l’Azawad  (MNLA,National Movement for the Liberation of Azawad) and Al-Qa’ida in the Islamic Maghreb (AQIM) as well as self-defence militias.

The United Nations Secretary-General’s 2012 Report on Children and Armed Conflict, released this week, has for the first time explicitly named parties to the conflict in Mali as being responsible for the recruitment and use of child soldiers and for sexual violence against children.

“It is critical that the leadership of the MINUSMA prioritize the issue of child soldiers and other children associated with armed forces,” said Gaëtan Mootoo.