For the second time in three months, a CP Rail train carrying toxic and flammable hydrocarbons has derailed in the city of Calgary. On September 11, 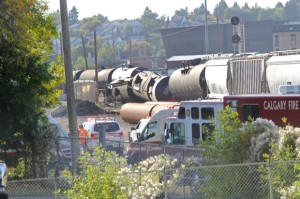 The train was traveling at a slow speed while exiting CP Rail’s Alyth yard near the center of the city. Brian McAsey, assistant deputy fire chief of Calgary, told the Calgary Herald, “(The product) is extremely flammable and very volatile.”

The derailment also ruptured a natural gas line. Apparently, none of the product spilled from the rail wagons.

On June 27, six wagons on a CP Rail train carrying similar product jumped the tracks while crossing the Bow River on the 100-year old Bonnybrook Bridge. Reportedly, the weight of the cars caused the structural support of the bridge to give way.

That accident happened at the height of catastrophic flooding of Calgary and southern Alberta that month. The rushing water of the Bow River, which passes through the center of the city, might have weakened the bridge’s structure, but this was never officially determined.

Oil by rail in large volumes is a new phenomenon in Canada and the United States, beginning only some three years ago. It is expanding rapidly and among the many safety concerns it raises are questions about the ability of old and deteriorating rail lines and bridges to handle the exceptional weight of these trains. This may be a common denominator of the two accidents in Calgary.

Meanwhile, the Transportation Safety Board (TSB) of Canada has issued a statement on one aspect of its ongoing investigation into the July 6 oil train disaster in Lac Mégantic, Quebec. The federal agency says the identification and labeling of the oil carried on the fateful train through the town was false.

Investigators were puzzled from the get-go by the extreme volatility of the product on the Montreal, Maine and Atlantic Railway train. It exploded in a giant fireball near midnight on July 6 in the center of the town when most of the 72-wagon train derailed. Forty seven people died and the surrounding ground and waters have been heavily polluted.

It turns out that the oil, which originated in the Bakken oil field in North Dakota and was carried as far as Montreal by CP Rail, is light and highly flammable. It should have been labeled a ‘class two’ hydrocarbon instead of the ‘class three’ designation it carried. ‘Class two’ means more volatile and dangerous.

The change in designation might not have changed the outcome because there are no additional regulations that it triggers. But it might have prompted additional care in securing the train, which was stationed overnight but by all evidence was inadequately braked. It lost its braking and rolled driverless into Lac Mégantic. And regardless, this is another example of the lax rail safety regulations in the U.S. and Canada that the disaster has brought to light. Rail carriers and their customers operate with too little public and regulatory scrutiny.

As reported in the Globe and Mail, the TSB has cited the North Dakota shipper, an affiliate of Miami-based World Fuel Services Corp., and the purchaser of the oil, New Brunswick’s Irving Oil conglomerate, for failing to ensure the oil was properly classified and identified, including on the classification notice that must be attached to each wagon. The report does not mention CP Rail’s responsibility.

One reader of the Globe, the newspaper that originally broke the story of the MM&A train product’s volatility and has been following it closely since, commented online, “I was told during a high level WHMIS [workplace safety] training course that it was a federal offense to misrepresent, falsify or fail to properly identify materials that are manufactured, stored or transported. Who goes to jail here?

A portion of Irving Oil’s crude shipments from North Dakota to its refinery and export terminal in Saint John were switched following the disaster from the MM&A line to the CN Rail main line that connects the city to Montreal via Quebec and New Brunswick. There has been next to no news reporting of this change, including how many trains per day or week are involved and how residents along the CN line are taking it.

Of course, the main concern that the tragedy in Lac Mégantic has highlighted is the crazed and reckless path of unbridled extraction and burning of fossil fuels down which the economic elites of the world is dragging humanity.

Irving Oil is facing additional public relations headaches following the news that its liquefied natural gas plant and export terminal in Saint John, known as Canaport, caused a massive killing of migrating songbirds in early September. The birds were apparently drawn to the light of the ‘flaring’ at the liquefaction plant. Natural gas flaring (as distinct from the flaring of gas at oil drilling sites) is the highly-polluting practice of reducing pressure in a natural gas complex by burning off the pressurized gas.

Roger Annis is a writer in Vancouver and member of the newly-formed Vancouver EcoSocialist Group. He wrote a comprehensive article on the lessons of the oil train disaster in Lac Mégantic that was published in Rabble on August 30.

Update, Sept 13, 2013: Calgary mayor Naheed Nenshi has gone public with his anger at the secrecy of CP Rail’s oil train shipments. Yesterday, one day following the latest oil train derailment in Calgary, the mayor said, “We had an enormous amount of trouble getting a straight answer from CP about what was in those cars.”

“Once again, it was city staff, who have no regulatory authority on this, risking their lives to solve the problem,” Mr Nenshi told reporters. “And we can’t solve the problem if we’re not given correct, accurate information at the very beginning.”

The mayor also said the federal government is failing in its duty to enforce adequate safety regulations on Canada’s railways. See a full news article on this story here: Nenshi upset at lack of answers from CP after Calgary train derailment, by Kelly Cryderman, Globe and Mail, Sept 13, 2013

By Kelly Cryderman and Michael Babad, with reports from Paul Koring and Steven Chase, The Globe and Mail, Sept 11, 2013.