Debating degrowth: ‘Be careful with the alternative energies you wish for’

By Don Fitz, originally published in Green Social Thought, Sep 7, 2021  Original title: ‘Be careful what energy you wish for’. Re-published here on A Socialist In Canada, Sept 10, 2021. 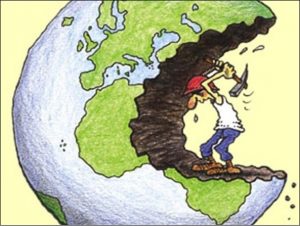 Introduction by A Socialist In Canada:
Don Fitz is a writer and editor at Green Social Thought. This essay is a reply to two recent interviews with Robert Pollin published in Truthout.org:

Robert Pollin is distinguished professor of economics and co-director of the Political Economy Research Institute at the University of Massachusetts-Amherst. He is a leading proponent of the aspirational ‘Green New Deal’ advocated by figures in the Democratic Party as well as ecosocialists.

1. A reply by Robert Pollin to Don Fitz, here
2. A rejoinder by Fitz to Pollin’s reply, here

In his reply, Pollin writes, “Fitz seems to believe that that we can move the global economy onto a viable climate stabilization path if we all consume less, work fewer hours, and eat less meat, while also shortening global supply chains and making cities more walkable. This appears to be the case, in his view, even if we do not transform our global energy system from one dominated by fossil fuels to one dominated by sources that are CO2-emissions free. He offers no evidence to support his position; in fact, there is no evidence that supports his position.”

Here is part of thte rejoinder by Fitz to Pollin, “As heat waves, out-of-control fires and hurricanes increasingly sweep the globe, fossil fuel apologists continue their ‘climate change denial’. They are matched by the ‘energy denial’ of AtlE enthusiasts who similarly deny that ALL industrially produced energy has seriously negative effects.”

Debating degrowth: ‘Be careful with the alternative energies you wish for’, by Don Fitz, originally published in Green Social Thought, Sep 7, 2021

Climate change is an existential problem confronting humanity and Robert Pollin offers well thought-out plans in his interviews in Truthout.org on June 10 and July 3. There is only space here to respond to these three themes by Pollin:
(1) We can reach zero CO2 emissions by 2050
(2) An enormous expansion of alternative energy (AltE) can create far more jobs than would be lost by eliminating fossil fuels
(3) Without stating so explicitly, Pollin implies that negative aspects of AltE would be tiny.

Unfortunately, the downsides of AltE loom so large that they must form the core of any serious discussion. Like many proponents of AltE, Pollin does not present climate change as symptomatic of capitalist overproduction but as a stand-alone crisis whose resolution may require strengthening capitalism. Yet, there is already more than enough manufactured production to meet the needs of humanity–if only manufacturing were shifted from creating what is wasteful and destructive to production for need.

The rush to massively expand AltE ignores what environmentalists have known for decades. Redesigning cities to create walkable communities is vastly more ecological than subjecting children in the Democratic Republic of Congo to the horrors of cobalt mining for electric vehicles. Humanity can reduce its footprint by consuming much less meat and relying on local food rather that transporting the average bite 1700 miles. Americans do not need housing space vastly exceeding that of anywhere else in the world (except Australia). Buildings can be altered for reuse instead of constant tear-down-rebuilding. Manufacturing standards can be set to require the maximum life for goods rather than subjecting people to the message of ‘buy, buy, buy!’ as corporations design products to fall apart and go out of style. Humanity does not need more crap – corporations do.

Rather than exploring these, Pollin labors to satisfy the corporate urge for infinite growth via “clean, renewable” energy sources of solar, wind, “small-scale hydro,” and “low-emissions bioenergy.” It is also necessary to point out that achieving a “zero emissions economy” by 2050 is a disingenuous goal. The life cycle of AltE requires fossil fuels for construction equipment, mining for essential minerals, transportation, and disposing of the energy harvesting equipment. Wind and solar are intermittent, which means they require backup (often gas) for emergencies.

Solar power. In addition to health problems from extraction, manufacturing and disposal, there are issues of those who would be affected. Greg Wagner recently wrote me: “I live in a small rural farming community known as Goldendale, Washington in Klickitat County on the east side of the state. I formed the group Citizens Educated about Solar Energy (CEASE) when I learned by accident the solar companies’ plans. My home and many others are surrounded by tens of thousands of acres of wheat/alfalfa/hay fields and beautiful views of Mt. Adams, Mt. St. Helens and Mt. Hood. This will all be destroyed if our county commissioners allow Invenergy and Cypress Creek Renewables to build their proposed solar sites on the 10,000 acres we know about…”

On the other side of the U.S., citizens in Culpepper County, Virginia blocked a proposal by Maroon Solar. The planning board said that “the project was out of character with the area, too large, and would be injurious to the health and safety of area residents.” Opponents also commented that “the utility-scale project would ruin the rural nature of the area, the environment and historic resources.”

Wind power. Health problems also appear with wind and victims of its placement are often unhappy. Opponents halted wind turbines in Reno County, Kansas. As in other areas, a major concern was having wind turbines too close to people. As Patrick Richardson reported, “The setback is often no more than double – sometimes just one and a half times – blade height, meaning turbines can be within as little as 500 feet away from a school, as in Labette County.”

Showing that the problem is international, Shivani Gupta writes of 1000 villagers in the Kachchh district of India who protested plans to put industrial wind turbines in portions of the Sangnara forest and adjacent common grazing areas where farmers bring their cows and sheep. “The Sangnara forest is home to a huge diversity of endangered flora and fauna. This includes chinkara, wolf, caracal, ratel, hyena, desert cat, Indian fox, spiny tailed lizard, desert monitor, white-naped tit, vultures, and many more.”

‘Small scale’ hydro-electricity. Such power comes from dams with a capacity of less than 30 MW. While these dams are individually less destructive than mega-dams, a much, much larger number would be needed to provide power for an incessantly growing capitalism.

At 22 MW capacity, the Agua Zarca hydro-project in Honduras was “small-scale”. Berta Cáceres won the 2015 Goldman Environmental Prize for organizing the Lenca people along with other indigenous groups and the Afro-Honduran Garifunas to oppose the dam. The following year, she was murdered by those who stood to profit from ‘clean, renewable energy‘. In addition to being sacred, “the Gualcarque River is a primary source of water for them to grow their food and harvest medicinal plants. Dams can flood fertile plains and deprive communities of water for livestock and crops.”

‘Low-emissions’ bioenergy. Burning organic material is now the rage in Europe. In April 2021, climate scientists James Dyke, Robert Watson, and Wolfgang Knorr, who had formerly supported plans for ‘net-zero’ emissions, did an about-face as they wrote about its latest version, Bioenergy Carbon Capture and Storage, or BECCS:

… rather than allow ecosystems to recover from human impacts and forests to regrow, BECCS generally refers to dedicated industrial-scale plantations regularly harvested for bioenergy rather than carbon stored away in forest trunks, roots and soils. Currently, the two most efficient biofuels are sugarcane for bioethanol and palm oil for biodiesel – both grown in the tropics. Endless rows of such fast-growing monoculture trees or other bioenergy crops harvested at frequent intervals devastate biodiversity. It has been estimated that BECCS would demand between 0.4 and 1.2 billion hectares of land. That’s 25% to 80% of all the land currently under cultivation.

BECCS can also include burning wood pellets. Land Institute research scientist Stan Cox observes that “This process is not emissions-free; in fact, wood-fired power plants produce more pollution per kilowatt-hour of electricity than coal-fired plants.” Even if BECCS were used to capture those emissions, Cox notes:

… the process’s many steps – producing and harvesting biomass crops, hauling the biomass to the processing factory, grinding and pelletizing, hauling pellets to the power plant, sucking carbon dioxide out of the smokestack, liquefying the carbon dioxide, hauling the liquid to the injection field, and shooting it into the earth under high pressure – would, in sum, eat up large quantities of energy.

Jobs. Once we realize that AltE has devastating consequences and that humanity can exist quite well without the unnecessary production, a critically important question remains: Will using much less energy leave tens of millions of people unemployed? After all, ensuring full employment during a just economic transition must be a central goal of coping with climate disaster. The answer is provided to us by centuries of labor activists who have demanded a shorter work week. FDR was president the last time that labor considered a 30-hour work week in the U.S. Why in the world should we work more hours to destroy the lives of our descendants?

Caps. One of the most astounding aspects of the Green New Deal (GND) is that, despite understanding by its supporters that fossil fuels must be reduced, none of the Democratic Party versions of the GND include a cap on the amount of fossil fuels that can be produced. They imply that increasing AltE will cause fossil fuels use to decline, which is completely false. The capitalist state will ensure that AltE is added to the mix. As Cox notes succinctly: “The purge of oil, gas, and coal must be done directly, by law.”

Questions. Given that dangers of AltE are real, large, and growing, these are questions that its adherents should answer:

Contradictions. Jonathan Cook realizes that “it is quite possible – common, in fact – for us to hold contradictory beliefs at the same time: like worrying about the threat posed to our children’s future from climate change, while supporting political systems committed to building more roads and runways.” An increasing number of people are overcoming this psychological dilemma as they realize the fallacy of ‘solutions’ that intensify problems. Circular destruction occurs when hotter weather leads to more air conditioning, which causes more energy production for electricity, which causes more climate change and increased heat. It cannot be said too many times: the fundamental challenge today is to reduce production while increasing the quality of life. This capitalist crisis of overproduction cannot possibly be solved by increasing production.

Don Fitz (fitzdon@aol.com) is on the editorial board of Green Social Thought. He was the 2016 candidate of the Missouri Green Party for Governor. His book Cuban Health Care: The Ongoing Revolution was published in June 2020 by Monthly Review Press.

Excerpt:  …Concern is growing that temperature rises above 1.5°C are beginning to be seen as inevitable, or even acceptable, to powerful members of the global community. Relatedly, current strategies for reducing emissions to net zero by the middle of the century implausibly assume that the world will acquire great capabilities to remove greenhouse gases from the atmosphere… To achieve these targets [keeping global temperature rises below 1.5C while enhancing social equity], governments must make fundamental changes to how our societies and economies are organised and how we live. The current strategy of encouraging markets to swap dirty for cleaner technologies is not enough. Governments must intervene to support the redesign of transport systems, cities, production and distribution of food, markets for financial investments, health systems, and much more. Global coordination is needed to ensure that the rush for cleaner technologies does not come at the cost of more environmental destruction and human exploitation…