Cuba rolls out master plan for food production and distribution 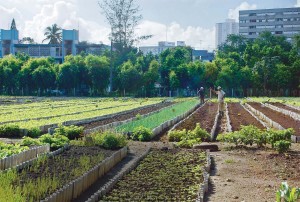 Urban farming in Cuba is big and growing

HAVANA, Nov 7 (Reuters) – Cuba rolled out a master plan this week to reform food production and sales that definitively ends the state’s monopoly on distribution and replaces many rules that hamper farmers and consumers. A decree which puts the management of most food distribution in non-state hands will be applied on an experimental basis in Havana and the adjoining provinces of Artemisa and Mayabeque before going nationwide beginning in 2015.

With the country importing around 60 percent of its food and private farmers outperforming state farms on a fraction of the land, authorities are gradually deregulating the sector and leasing fallow land to would-be farmers. It is slow going, with farm output up just a few percentage points since President Raul Castro, who replaced his ailing brother Fidel in 2008, began agricultural reforms as part of a broader effort to “modernize” the Soviet-style economy.

Many aspects of the new law bring together reforms already in place or activities that have spontaneously developed and been tolerated by authorities even if technically illegal, including the renting and selling of trucks to farmers and allowing them to contract private hauling of crops instead of relying on the state.

The decree allows farmers, cooperatives and state farms to sell produce in any quantity and to anyone they please after meeting state contracts, instead of being mired in regulations as to how much they can sell, to whom and how.

Large consumers, including state entities and private eateries, can purchase produce wholesale from private farms and cooperatives, instead of just the state.

The new system still sets prices for a few basics such as rice and beans, prioritizes state contracts (54 percent of output last year) and prohibits the sale of a few export crops such as tobacco and coffee, but by and large represents a big step toward allowing market forces to govern production and prices.

“This very important initiative fulfills the government’s commitment to facilitating wholesale markets for fruits and vegetables as the private sector has petitioned,” said Richard Feinberg, whose new study, “Soft Landing in Cuba? Emerging Entrepreneurs and Middle Classes,” was released this week by the Washington, D.C.-based Brookings Institution.

“Remarkably, it provides space for private businesses to both produce and market foodstuffs in wholesale quantities, in open and healthy competition with the state,” he said.

Cuban farmers and consumers have long complained that the state’s monopoly on food sales is a disincentive to production, inefficient and leads to waste and poor quality produce.

“Many times we do not produce all that we can for fear we will have nowhere to sell it,” said farmer Diogenes Telles, in a phone interview from central Camaguey province. “Now nothing will rot in the fields because the state doesn’t pick it up. If we have the security that all we produce we can sell, of course we are going to produce more,” he said.

Cuban economists and farmers have argued for years that the state should get out of assigning farm supplies and equipment to farmers in exchange for contracted food and let those who till the land purchase what they need based on their success and thus purchasing power, something not addressed in the law.

Roberto Perez Perez, the member of the Communist Party reform commission in charge of agriculture, told the state-run media this week that a pilot project to sell supplies to farmers was already underway in the special municipality of the Isla de la Juventud. “With the measures that are being taken and those that will be implemented we will have an agricultural sector closer to what we need,” the official media quoted him has stating.