Cuba and lessons in socialist transformation

In early 2017, a Cuban writer and historian delivered a presentation to an audience in Havana examining the challenges in building socialism today in Cuba. In his talk, Frank Josué Solar Cabrales made a number of assertions about Cuba’s future that are useful to critically examine. In addition to better understanding Cuba, this can also shed light on the revolutionary, transformative processes underway elsewhere in Latin America.

The theme of ‘transition’ to socialism punctuates the presentation and this is as it should be in any discussion of socialism. Cabrales explains, “Socialism is more than a state, a model, a fixed moment, or a specific mode of production. Rather, it is a period of transition, a process in motion. It is a path more than it is a point of arrival. From this point of view, which is the classical view, socialism is the period of construction of communism, and its fundamental objective is to consolidate the communist way of life over the capitalist.”

Socialism is a material, cumulative process, not a pre-ordained outcome of revolutionary will and declarations. These days, many Western leftists and aspiring Marxists pay scant attention to the transitional character of any transformation from capitalism to socialism. They tend, instead, to fall back on phrases as substitutes for analysis and strategy outlining the class and social alliances that will be necessary in a transition out of ruinous capitalism. The goal of class and national alliances between workers, farmers, Indigenous peoples and other sections of the working classes (those who derive their livelihoods from selling their labour power) is to forge a democratic and broad-based  governmental power that can lead society, step-by-step, in a struggle to vanquish capitalism and all its destructive traits.

Cabrales argues, “The social development achieved by Cubans in so many aspects of life during the past 60 years has reached the level of the developed capitalist world, going far above the existing material conditions of reproduction. This goes beyond what would have been achievable on a small island if a socialist revolution had not removed the limits of what appeared possible [ie removed the limits of the existing capitalist society in Cuba and in the world surrounding it].”

But how did Cuba “remove the limits” that made possible a socialist transformation? How might that experience today assist the peoples of Venezuela and Bolivia, if not Ecuador, in carrying forward anti-capitalist revolutions? Alas, the presentation does not move beyond generalities drawn from past experience. It is, in many respects, removed from time and place. In its zeal and abstraction from time and place, it risks providing downright false prescriptions.

Cabrales explains, “The market and the economic categories of capitalism do not work for building socialism. They must be understood as a necessary evil that must be tolerated during a transitional period.”

He makes a brief reference to the ‘New Economic Policy’ of the Russian Revolution during the early 1920s and makes oblique reference to current policy in Cuba, which for the past eight years or so has opened some areas of the Cuban economy to small-scale, private enterprise.

Cabrales says, “If adverse circumstances make it necessary to extend such measures [market and economic categories of capitalism], we should understand and explain the situation as a setback—as Lenin did when he applied the New Economic Policy (NEP)—, and never as a step forward towards communism.”

But Lenin did not use the term “necessary evil” to describe NEP. He called it, variously, a “strategic retreat” or “defeat” of policies from 1918-20 that were termed ‘war communism’. What’s more, Lenin’s words should be treated in the context of the time in which they were delivered.

The “defeat” to which Lenin refers is the defeat of early, unrealistic expectations that revolutionary Russia could leap over its inherited conditions of poverty and underdevelopment and proceed directly to constructing a socialist economy.

Among the broad features of war communism were:

Ultimately, war communism was, indeed, successful because its main purpose was survival of the worker and peasant republic in the midst of the civil war and foreign intervention imposed upon it. But as a quick path to socialism, it was illusory. In his report to the Fourth Congress of the Communist International in November 1922 (report titled ‘ Five Years of the Russian Revolution and the Prospects of the World Revolution’, delivered 18 months after the launch of NEP), Lenin explained that by the end of 1920, the government he led was facing increased popular discontent due to extreme economic dislocations and shortages, not least in the provision of food. He told delegates to the congress:

What gave rise to this peculiar, and for us, of course, very unpleasant, situation? The reason for it was that in our economic offensive [‘war communism’], we had run too far ahead, that we had not provided ourselves with adequate resources, that the masses sensed what we ourselves were not then able to formulate consciously but what we admitted soon after, a few weeks later, namely, that the direct transition to purely socialist forms, to purely socialist distribution, was beyond our available strength, and that if we were unable to effect a retreat so as to confine ourselves to easier tasks, we would face disaster.

Lenin did not express regret. “Don’t be afraid to admit defeat,” he said in an earlier report on NEP to the Russian Communist Party in October 1921 explaining the new policy. “Learn from defeat. Do over again more thoroughly, more carefully, and more systematically what you have done badly.”

Lenin’s absence of regret can be further understood by recalling that the Russian Revolution of October 1917 had no economic program to speak of at its outset (cf Stephen Cohen, Bukharin and the Bolshevik Revolution, 1973.) With no socialist precedent from which to learn, the young revolution made up economic policy as it went along.

Cabrales argues further, “The economic growth necessary for socialism must be achieved through socialist means, and not through capitalism’s worn-out tools.” This is a truism. While it is important to be reminded of this general principle, it is not a path to societal transformation. The early Soviet Union was very much dependent on “capitalism’s worn-out tools” in order to survive and, with good fortune, proceed to a socialist transformation.

What about later revolutions which followed Russia, notably in China in 1949 and Cuba in 1959? And what about today’s countries in the throes of radical social transformation, notably Venezuela and Bolivia?

China as well as Cuba faced an immensely different, more favorable world than that of the early Russian Revolution (the Tsarist Empire brought down by the Revolution encompassed far more people and territory than Russia proper). This was thanks to the survival of the Soviet Union during the years of the Great Depression and then the cataclysmic World War Two. It was also thanks to the anti-colonial revolt following WW2.

The imperialist victors of the war emerged with diminished military power and political authority in relation to the non-imperialist world (notwithstanding the U.S-British development of the terrible power of nuclear weapons). Recall that Germany and Japan were all but destroyed by the war, while the wartime heroism of the Soviet people had greatly enhanced the prestige of the Soviet Union, a country considered by hundreds of millions around the globe as a viable socialist project.

China and Cuba (and to some degree Korea and Vietnam) benefitted greatly from economic and military assistance provided by the Soviet Union. This was a far cry from the years of 1918-21, when the large, imperialist powers of the world invaded Russia and its neighbouring republics in an effort to crush the revolution begun in 1917. In 1921, intervention and civil war resulted in a terrible famine on Russian soil that killed millions.

Cuba was able to avoid NEP-type policies in agriculture due to Soviet economic assistance. Careful study of the negative experience in the Soviet Union of forced collectivization of agriculture and pell-mell industrialization during the late 1920s and 1930s led the Castro-led government in Cuba to encourage but not oblige Cuban peasants to join cooperative or collectivized production.

Cabrales writes, “… the only way to increase productivity and generate economic growth by socialist means is through consciousness, education, the formation of new men and women, and new social relations of production among them.” This basic truth has always guided the leaders of revolutionary Cuba, going back to the days when Ernesto Guevara headed the new, national bank of the country in the early 1960s. But how does this apply in today’s conditions in Bolivia and Venezuela, for example, where mixed, private-public economies prevail?

Both economies are heavily dependent on selling their natural resources on the world capitalist market. Both, therefore, are subject to the price fluctuations in that market, and they are subject to hostile trade and embargo practices by the imperialist countries which dominate world markets. It is no more possible for these countries to ‘leap over’ that reality than it was for the early Soviet Union to leap over the economic and political conditions of its time.

In both Bolivia and Venezuela, intense discussion and debate is taking place over the pace of socialist development and how much accommodation to world capitalist market conditions is required. Socialist principles are needed to help guide discussion and decisions, but they don’t entirely answer complicated issues of what to do from one week or one year to the next.

Reuters published a report on August 1 explaining that the Cuban government is temporarily slowing the measures begun in 2010 permitting small-scale private enterprise (self employment) in such niches as tourism, home renovation and construction, trade, and provision of personal services.  The freeze is being undertaken in order to put in place better mechanisms for tax collection, quality of services rendered and legal origin of goods sold. According to the Reuters report, self employed workers make up only 12 per cent of the Cuban workforce. 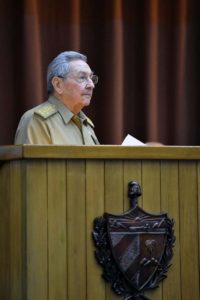 President Raul Castro affirmed in a speech on July 14, 2017 to the closing session of the National Assembly of People’s Power that expansion of self-employment would continue to take place in non-strategic sectors of the Cuban economy.

What special challenges and measures are needed in Cuba in the face of increasingly complex technology and automation in the global economy? What about the complex exigencies of the global warming emergency? Will Cuba need to turn to such measures as joint investments with foreign capital in order to keep abreast of emerging technologies?

The Cabrales presentation is most striking for the absence of any mention of the hostile, capitalist world in which Cuba finds itself. It is as though Cuba can expect to arrive at a communist society on its own.

Cuba shares the fate of the other countries and peoples of the world targeted by the large imperialist countries, including, increasingly, China and Russia. All of humanity faces a triple threat: a rise of imperialist war and militarism (in the Middle East, in eastern Europe, in southeast Asia, to name the three largest hotspots); a global warming emergency; and deepening social disparity (the growing gap between rich and poor). Humanity’s future depends on the entire world coming together to combat this triple scourge, one resolute step at a time.