The following is a transcript of an interview broadcast on CBC Radio One Vancouver’s afternoon program, ‘On the Coast’, Nov 28, 2016. Transcribed by Roger Annis from the original audio podcast. While mainstream media in Canada rails against the “dictator” Fidel Castro and predicts the downfall of socialism in Cuba, John Kirk provides a sober and positive look forward. 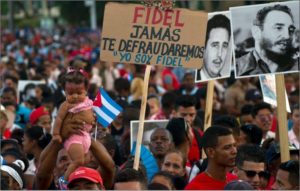 Mass rally commemorating the life of Fidel Castro in Santiago de Cuba on Dec 3, 2016. The following day, his ashes were interred in the city (Associated Press)

Stephen Quinn, host of CBC ‘On The Coast’: Schools and government offices were closed today in Cuba and many Cubans were given the day off work as part of the week-long plans to pay tribute to the former dictator [sic] Fidel Castro. Ever since he came to power in the 1959 Revolution, Castro embodied the Cold War and his influence stretched well beyond his island’s borders. For a look at how the country and its place in the world may change now that Castro has gone, we’ve reached John Kirk. He is a professor of Latin American studies at Dalhousie University. He also worked as a translator in meetings with Fidel Castro in the 1990s. Good afternoon to you.

CBC: What is your assessment of what the death of Fidel Castro means for the future of Cuba?

John Kirk: I think for the short term it is devastating for the psychology of the nation. He is a person who has been the father and the grandfather of the country for 50 years. But I think in terms of the real decisions that are taking place in Cuba and have been taking place since he left power in 2006, I don’t think it is going to make that much difference. Most of the decisions have been made by his brother Raul Castro. The economy has changed radically since he was in power. And while I’m sure he’s been consulted, all decisions have been taken by Raul Castro, not by Fidel.

CBC: Tell me about those changes since 2008. What has changed?

John Kirk: Several things. In 2013, Cubans were allowed to leave the country without getting permission from their workplace. So any Cuban now can leave to go wherever they want to as long as they can get an entry visa from the country to which they want to go. Beforehand, you had to go through a very laborious process–go and see your boss and get a piece of paper in which he or she would say that you could leave. That’s gone.

More significantly, the economy has changed dramatically. Foreign investment has come in, tourism has continued apace. The economic base now for Cuba is the exportation of medical services. To put this in context, Cuba, with a population of 11 million, a third of the size of Canada, has 10,000 more doctors than we have. So the main source of hard currency coming into Cuba now is the exportation of Cuban doctors. Twenty-five per cent of Cuban doctors are working abroad and that is bringing in about eight billion dollars to the national treasury.

Also, in terms of the local economy, there has been a liberalization – 2,000 private restaurants in Cuba, 500,000 Cubans who used to work for the state are now self-employed, 14,000 private bed and breakfast operations. So there has been a significant downsizing of the government and an increase in small enterprises.

CBC: Depending on where you stand, of course, will determine your reaction to the death of Castro. Human Rights Watch, for instance, issued a statement calling Castro’s record on human rights “a dark legacy”. How does the future of human rights in Cuba look to you?

John Kirk: It is difficult to look at human rights in Cuba without looking at the context. When Castro took power, it was after 40,000 people had been killed by the Batista dictatorship, when Castro came into power. Civil and political human rights were limited and are limited in Cuba. Social, cultural and economic rights are very good. In Latin American terms, or developing world terms, Cuba has basically got a good record.

If you look at Mexico, for instance, it is far worse. In Mexico, according to Amnesty International, there are 27,000 people who are missing, 103 journalists have been killed, murdered, in the last 15 years and 25 disappeared. Cuba, according to Amnesty, has got 60 political prisoners. So, it is bad, but it is far less than many countries where we are not shining the spotlight.

And of course, 90 miles away from Cuba is the self-declared enemy. Despite Obama’s wonderful initiative, it is important to bear in mind that 10 American presidents vowed to bring about regime change in Cuba. One fact, which isn’t widely known, is that 3,400 Cubans were killed by acts of terrorism in the country, terrorism stemming from southern Florida. To this day, hundreds of thousands of dollars are being funnelled by various branches of the U.S. government to opposition groups to again bring about regime change. So it is difficult to have wide open liberal democracy precisely when you have this track record.

CBC: And what impact do we suspect that would have [on Cuba-U.S. relations]? I mean, when I heard about the death of Fidel Castro, I thought that is going to have an impact on Cuba but is it more of an impact than the Trump presidency will have?

John Kirk: Yeah. The elephant in the room is exactly what Donald Trump is going to do. There have been three distinctive positions that he’s taken on the Cuba file. As we all know, Donald Trump has changed his mind on several things, on several occasions. Today, he said that if he doesn’t get a good deal for the Cuban population and for the United States – no one knows what a good deal is – then he’ll start playing rough with Cuba. But when he first started talking about Cuba, he said that Obama was right to try to negotiate with Cuba because 50 years of trying to isolate Cuba had only isolated the United States, which is true.

So what he foresaid was that we have to get a better deal. Then when he was campaigning in southern Florida with Cuban Americans, he talked about the need to undo all the executive actions, all the initiatives of Obama. We also know that he sent representatives down to look at negotiating the buying of property, illegally, in Cuba. So, the idea of a Trump hotel, or a Trump golf course, is not perhaps out of the realms of possibility at some point. It is difficult to know, but the bottom line is that Trump is going to be very, very important in what happens in Cuba.

CBC: And we have Raul Castro, now who is 85 years old. He is not going to be around forever. Do we know about who could possibly succeed him?

John Kirk: Raul Castro has made it very clear that no one should have more than two five-year terms in charge of the Cuban government. Quite a break from his brother’s time in office. When he took over definitively as president in 2008, he said that in 10 years’ time, ‘I’m outta here’. So in February 2018 he will leave the reins of government. The smart money is on a first-vice president. There are several vice presidents in Cuba. The most likely candidate is a guy called Miguel Diaz Canal, who is a 55 year old professor of electrical engineering, a member of the Communist Party, of course. He has been groomed to take this position, in my opinion. He met with Justin Trudeau, when Justin Trudeau was there just over a week ago. He meets all the visiting dignitaries. Also, he is a Beatles fan and a devotee of social media. So we are going to have a very different form of government taking over if he gets the nod, if he is elected by the Cuban people in 2018. But again, we will also have to wait and see what Trump decides.

CBC: John Kirk. Great to talk to you about this today. I greatly appreciate it. Thank you.

Dr. John Kirk is a professor in the Department of Spanish and Latin American Studies at Dalhousie University, Halifax, Nova Scotia. He has traveled extensively to Cuba over his many years of research and writing on that country. He is the author of ‘Health Care without Borders: Understanding Cuban Medical Internationalism’, published in 2015 by the University Press of Florida. The above interview also appeared in CounterPunch. See also John Kirk’s 2012 essay ‘Medical internationalism in Cuba: An extraordinary success‘.

An extensive compilation of published articles on the legacy of Fidel Castro can be read on the dedicated ‘Cuba’ section of the New Cold War.org website, here.