Fidel Castro’s ashes will travel across the country on the route that marked the revolution’s triumph over the dictatorship in 1959. 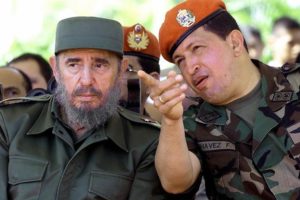 Cuba entered its second of nine days of  mourning Sunday over the death of revolutionary leader and former President Fidel Castro. The period of mourning, announced Saturday by the Cuban government following news of Fidel’s passing in a hospital late Friday night, will see planned public events suspended and flags flown at half-mast as Cubans pay their respects to the late leader. Officials have said scheduled travel to the island will not be interrupted.

On Saturday, Cubans across took to the streets to commemorate Fidel, known on the island as “El Comandante” and “El Jefe,” who led the country for nearly five decades. Students of his alma mater, the University of Havana, gathered in the capital city to pay tribute Saturday, bearing flags and shouting chants of “I am Fidel.”

Similar informal commemorations are expected to continue Sunday, ahead of the official days of memorial, beginning Monday. Calm was reported across the island as it prepares for the main events of Fidel’s funeral.

Monday and Tuesday will be formal memorial days with public services for the late leader at the Jose Marti Memorial in Havana’s historic and iconic Revolution Square, where the former leader often spoke to large crowds. A mass gathering is scheduled to take place there on Tuesday at 7:00 p.m. local time.

Beginning Wednesday, Fidel’s ashes will begin a five-day cross-country tour from Havana to the southern city of Santiago, retracing in reverse the leader’s own steps he took nearly 60 years ago on a victory march to the capital upon the fall of the U.S.-backed Fulgencio Batista dictatorship.

His ashes will be placed in a tomb at the Santa 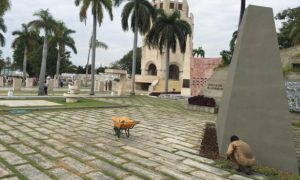 Fidel Castro will be buried at the Santa Ifigenia cemetery in southern Cuba (Jonathan Watts, The Guardian)

Ifigenia cemetery in Santiago at 7:00 a.m. local time on Dec. 4, also the final resting place of Cuban independence hero Jose Marti and other revolutionary figures in the country’s history.

As Cubans on the island mourn one of the greatest heroes of the revolution, anti-communist Cubans in Miami, Florida, home to “Little Havana” and the main hub for self-exiled Cubans in the United States, celebrated Fidel’s death for the second night in a row Saturday. Meanwhile, headlines in local media like the Tampa Bay Times and Miami Herald continued a longstanding practice villainizing the anti-imperialist revolutionary leader.

Fidel Castro died at 10:29 p.m. on November 25 at the age of 90 after surviving 638 CIA assassination attempts over decades as Cuba’s most important political figure. President Raul Castro announced his brother’s death on state television, concluding with Fidel’s most iconic slogan: “Toward victory, always.”

Related readings:
Condolences by Vladimir Putin following the death of ‘remarkable statesman’ Fidel Castro, published on the website of the President of Russia, November 26, 2016