Sept 16, 2013–Residents of the central Calgary neighbourhood of Inglewood staged a protest action on Friday, September 13 against CP Rail over its transport of dangerous chemicals through the city. 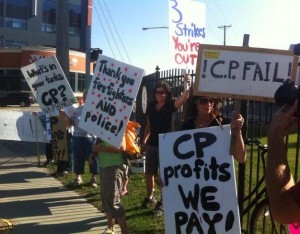 The action was prompted by the derailment of eight cars on a CP Rail train two days earlier. The cars were carrying close to one million liters of a highly flammable gasoline product (diluent) used in the pipeline transport of tar sands bitumen. They derailed at CP’s large, Alyth rail yard, adjacent to Inglewood in the heart of downtown Calgary. It’s the second oil train derailment in the city in three months.

Some 75 people took part. They chanted “CP Rail, CP Fail”, expressing their anger and frustration with the failure of the company to address concerns stemming from its growing transport of oil-by-train and expansion of noisy and polluting diesel locomotive repair work at the Alyth yard.

Lara Murphy, one of the organizers of the action, told CBC News, “We don’t want another Lac Mégantic to happen.” She echoed the views of Calgary Mayor Naheed Nenshi who has criticized the rail transport setup which presently has the city responsible for emergency response and cleanup but which makes it very difficult for it to know what, exactly, is rolling through its jurisdiction on rail.

Calgary fire Chief Bruce Burrell, who is overseeing the cleanup, said the city will “in all likelihood” bill CP for the cost.

Murphy told the online Calgary Beacon, “Our biggest concern is with the ramped up transportation of oil and gas by the rail industry as a whole”.

“If we’re gonna transport this oil, I feel and the group feels we need more transparency from the rail companies.”

She is part of the Inglewood Community Association that has been fighting CP Rail ever since it began to expand the traffic and locomotive repair work at Alyth in 2009. That brought formal noise complaints from the community. Last month, a victory was scored when the Canadian Transportation Agency (CTA) ordered the railway to shift  its locomotive work to a different location within the yard and to curb some of its overnight work. (For more detail on the noise problems, see page 6 of this Inglewood community bulletin from March 2011).

In the ongoing Lac Mégantic investigation, a report by Transport
Canada issued on Sept 12 says Quebec portions of the rail track of the Montreal, Maine and Atlantic Railway are in “defective” and “substandard” condition and do not meet safety standards. One section of the line was closed by inspectors following their observations.

The MM&A line connects Farnham, Quebec, just south of Montreal, to northern Maine. The line is severed by the disaster at Lac Megantic and it is not know when and if the destroyed track will be replaced by a replacement stretch that would go around the town.

CP Rail and Irving Oil contracted with the MM&A in 2012 to join in transporting crude oil from North Dakota to Irving’s refinery, Canada’s largest, in Saint John, New Brunswick. CP brought the oil trains as far as Farnham; the MM&A then moved them as far as northern Maine, where its line connects to the Irving-owned NB Southern Railway.

Prompted by shifts in the prices of crude oil, Irving Oil, part of the secretive Irving family conglomerate, has switched app. 25 per cent of its refinery supply away from overseas sources to North Dakota. Since the July 6 disaster at Lac Mégantic, the conglomerate has found other routes to continue moving the North Dakota crude, including along the CN main line that connects Montreal to Halifax, Nova Scotia.

A report in the Sept 14 Portland Press Herald says that crude shipments from North Dakota to Saint John through New England via the shortline Pan-AM Railway have rolled to a stop. That decision is being welcomed by opponents of oil by rail in Maine, including the groups 350 Maine and Maine Earth First! that have been protesting and attempting to block the shipments.

Following this latest accident, the Federation of Canadian Municipalities has reiterated its call for more consultation and information by railways on the dangerous products that they move. But the Federation as well as opposition politicians in Ottawa have raised little or no concerns about the climate consequences of oil-by-train.

Corporate greed is driving a massive expansion of fossil fuel extraction in North America—oil, coal and fracked natural gas. The difficulty the oil industry is facing in getting quick approval of new tar sands and conventional oil pipelines is prompting the expansion of oil-by-train shipments. In Canada alone, these have risen from 500 carloads in 2009 to an anticipated 140,000 in 2013.

Roger Annis is a member of the newly-formed Vancouver Eco-Socialist Group. He blogs on environmental and other issue at A Socialist in Canada. See his August 30, 2013 article, ‘Climate change and social change: Lessons from the oil train disaster at Lac Mégantic, Quebec’. See also his first article on the Sept 11 oil train derailment in Calgary which also reports on the false labeling uncovered by the Canadian Transportation Agency of the oil train that derailed and exploded in Lac Mégantic.