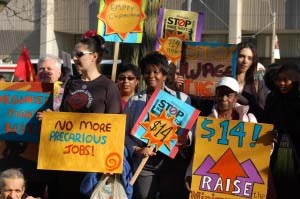 The decision of the leader of Ontario New Democratic Party leader Andrea Horwath and her strategists to present a conservative platform in the provincial election to take place on June 5 has unleashed a storm of controversy in the party and among its electoral supporters.

I reported several weeks ago at the outset of the election on the direction of the NDP’s campaign. The party has left many of its progressive and working class supporters angered and dismayed. The details of Horwath’s election platform as revealed two days ago are adding fuel to the fire.

A column by the Toronto Star‘s Thomas Walkom on May 24 details the party’s regression in its election platform compared to the 2011 election.

In the same issue of the newspaper, Walkom’s colleague, Martin Regg Cohen, looks at Horwath’s decision to not support any improvements to public pensions at this time. He writes, “Until this week, the prime minister loomed as the biggest roadblock to improving our outdated Canada Pension Plan and fending off a retirement income crisis. Now, Harper has found a new comrade-in-arms in his crusade to delay pension reform. As leader of Ontario’s NDP, Horwath has made a stunning about-face on pensions — betraying the middle class, working class, and everyone in between.”

He concludes, “Perhaps for the political strategists who road-tested and fine-tuned her snappy new campaign slogan, it all “Makes Sense”.[1] But beneath the packaging, the platform speaks volumes: Under Horwath, the NDP is no longer activist but obstructionist. Not progressive, but reactionary. The prime minister would be proud.”

An open letter signed by 34 long-standing members of the ONDP accuses Horwath of shifting the party’s traditional program to the right and pandering to right wing voters. “With Tim Hudak [Conservative Party leader] in a position to win the election, we are facing the most right wing government since Mike Harris [Ontario premier from 1995 to 2002]. Our priority should be to discredit his program and defeat him, not validate his program.”

The letter is a veiled argument for cooperation with the incumbent Liberal Party, saying that the budget introduced by Premier Kathleen Wynne in April and refused by the NDP, thus triggering the election, was the most progressive in recent Ontario history.

The “recent” qualifier word in the description of Wynne’s budget turns the reference into a very tame point of departure. Wynne’s budget proposed to limit an increase in the minimum wage to $11 (then tie it to inflation). She thus refused the broad-based campaign for a $14 minimum wage. (Horwath says she would add to the Liberal proposal, by 50 cents in each of 2015 and 2016.) Wynne wants to cut the pensions of public service workers, and her proposals to address the chronic public transit crisis in Toronto are slapdash.

A centrepiece of Wynne’s budget and now her election campaign is some kind of pension plan for Ontarians that would supplement the Canada Pension Plan (because of federal government obstinance in refusing CPP improvements). But Wynne’s plan remains vague. Will it be a defined benefit plan like the CPP, or a glorified private savings plan similar to the miserable ‘pooled registered pension plan’ of the federal government that was put forward years ago to divert attention from CPP improvements and never saw the light of day?

The budget did increse welfare rates for single people by 4.6 per cent, for a monthly maximum rate of $656. Families and disabled people would only see a one per cent increase.

Former NDP member of Parliament Olivia Chow is presenting her own version of an Andrea Horwath program in the mayoral election to take place this November in Toronto. Her campaign stresses fiscal moderation and conservatism. The Globe and Mail reports, “In meetings on Bay Street and in private homes in Rosedale and Yorkville, this long-time stalwart of city council’s left, then the federal NDP, is trying to persuade Toronto’s establishment that it is wrong to write her off as a left-wing zealot, or pigeonhole her as a tax-and-spend profligate. Instead, she argues, she is a practical politician who would guard the public purse as closely as any conservative.”

In British Columbia, an NDP version of the Andrea Horwath program is very present. Two recent articles, both appearing in The Tyee, examine the pro-fossil fuel, pro-trash-the-environment outlook of newly selected party leader John Horgan. One was written on May 12 by longtime environment crusader Rafe Mair. The other was written by political commentator Ian Gill on May 20.

Alas, much of the debate surrounding Horwath’s and Horgan’s pro-capitalist loyalties is somewhat moot. The working class and other progressive forces in both provinces would be immeasurably strengthened if they could create a broad, left wing party to contest elections (and mobilize in many other political realms, too). Workers and progressives in Quebec have managed to do this by creating the Québec solidaire party, thus shifting the terrain of politics in the province, from mere critique to action and change.

Notes:
[1] The ‘Makes Sense’ theme of the NDP election campaign is a cynical harkening to the Harris Conservatives’ austerity program, which the Conservatives called the ‘Common Sense Revolution’.