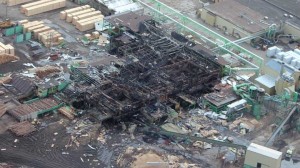 Another explosion has occurred in a wood processing mill in BC. Three workers were injured at the Pinnacle Renewable Energy pellet manufacturing plant in Burns Lake on Oct. 9. The company makes wood pellets out of waste wood, which are then used in industrial processes or in domestic heating.

A report on the accident in the Vancouver Sun reveals that over the past year, Pinnacle has received a string of fines for unsafe conditions in three of its plants specifically for wood dust accumulations. The fines were levied by WorkSafeBC, the workers’ compensation board for the province.

An earlier report revealed that seven of ten wood pellet manufacturers in BC failed WorkSafeBC inspections between April and June of this year. The infractions consisted of accumulations of wood dust at risk of fire or explosion, inadequate dust-control programs and the unsafe use of high-pressure air to clean up dust. The information was obtained by the Sun through a freedom of information request.

There are 13 wood pellet manufacuring plants in BC. THe industry is expanding.

The latest explosion has renewed concerns and protests by workers in BC’s forest industry following two sawmill explosions in 2012 that each killed two workers and injured dozens more.

In the town of Burns Lake, the Babine Forest Products sawmill blew up on Jan. 20, 2012. Three months later on April 23, Lakeland Mills lit up in Prince George, an industrial city of 80,000 in the geographic centre of BC. Burns Lake is two hours west of Prince George by car.

The BC government has refused calls for a public inquiry into the 2012 explosions, making its final decision in February of this year. Families of the victims had pressed hard for an inquiry, forming the group Families United for Justice to press their case. They say they have little confidence in reassurances from government and industry that the chronic inattention to dust accumulations in sawmills will be addressed.

One month before the inquiry decision, the government prosecution service decided that neither Babine nor Lakeland mill owners would face criminal charges. This decision flew in the face of WorkSafeBC investigations into conditions in the mills that revealed exceptional neglect of accumulations of sawdust.

Gary Mason, writing in the Globe and Mail, described the conditions in the Babine sawmill as “a bomb waiting to go off.” He wrote, “It’s a wonder the place didn’t explode into flames long before Jan. 20, 2012, such were the abhorrent working conditions at the plant.”

As subsequent reports revealed, forest companies have for years received multiple warnings that dust conditions in sawmills were dangerous and deteriorating and should be cleaned up.

Babine and Lakeland were each fined this year for the 2012 disasters, $725,000 and $1.01 million, respectively. But that’s cold comfort to survivors.

Ronda Roche’s husband, Glenn, was killed at Babine, and she helped to found Families United for Justice. She is deeply disappointed at the small amount of the fine and the time it took to issue both penalties. She told the Vancouver Sun in July, “It is very clear that failures in our system continue to disappoint our families. The reality of ever seeing justice or accountability for the death and injuries of Lakeland employees as well as for employees of Babine Forest Products continues to be unlikely based on the outcomes to this point of time.”

Both companies are appealing the fines. In an Oct. 31 statement, Lakeland said, To accept a regulatory sanction for this tragedy would leave the wrong impression that Lakeland and its people were not diligent or were reckless. Lakeland believes the facts do not bear out such a conclusion.”

On the two-year anniversary of the Lakeland explosion, families of the dead and injured victims in as well as the United Steelworkers union and many First Nations organizations spearheaded a Walk for Justice in Prince George. Several hundred people took part. They condemned the failure to hold a public inquiry and demanded the application of federal workplace safety law Bill C-45.

C-45 was adopted in 2004 to provide new rules for criminal liability of organizations, including corporations, their representatives and those who direct the work of others concerning workplace safety. Termed the Westray Law, it is named after the 1992 explosion of the Westray coal mine in Nova Scotia where company directors escaped criminal liability for neglect leading to an explosion that killed 26 miners.

Bruce Germyn does not mince words when he describes what he thinks went wrong at the Lakeland mill and caused the explosion. He was one of 24 workers on shift when the disaster happened. He received severe burns to his face.

Lakeland and Babine “literally got away with murder,” Germyn said in a telephone interview.

He and other workers at Lakeland complained for years about the sawdust build-ups inside the mill. Their concerns were heightened after the explosion at Babine. “I told our managers after the explosion at Burns Lake that we would be next,” Germyn said, adding that workers in his mill had taken to tracing safety warnings in the accumulated dust. According to Germyn, the company stated that disciplinary measures would be taken against any worker caught in the act.

What about the safety committee in the mill? Labour legislation in BC, as in other provinces in Canada, requires industrial workplaces to have a safety committee composed of company and employee representatives who meet regularly. Germyn describes that set-up as flawed.

Germyn told Global TV’s documentary program 16X9, , “No one ever listened. When you told them something, it was, ‘Nope, it’s our way or the highway.’”

Stephen Hunt, western Canada director for the Steelworkers union, told the program that the danger stems from “the continuing push to get production out the door.”

The decline of safety conditions in BC’s sawmills can be traced back to two big developments—concession collective agreements over work scheduling signed in the year 2000 and since, and warming winter temperatures that have allowed a mountain pine beetle epidemic to largely destroy the vast pine forests of BC.

No time to clean sawdust from sawmills

The agreements made in the lumber industry in 2000 opened up sawmills to round-the-clock operations as well as on-call shift scheduling. That change was bitterly contested in a lengthy strike, but it was not successful. Previously, mills would run five days per week on two-shift operations, leaving the nights and weekends for clean-up. Now many began to run with two ten-hour shifts Monday to Thursday and three 12-hour shifts Friday to Sunday, leaving less and less time for cleaning.

The concessions on shifts resulted from the relentless drive by sawmill companies to keep profits flowing. The past 20-plus years have seen companies consolidate and invest in labour-saving equipment. Many mills have closed.

Germyn says, “Lakeland used to operate five days per week. Then the company got greedy. The banks wanted more lumber produced if they were to continue to loan money. That’s when our mill really went down the tube.”

The threat of job loss is a major pressure on workers to put up with declining safety and scheduling standards. Since the early 1980s, lumber production in BC has fluctuated around a median of 30 million cubic meters per year. Employment in wood manufacturing, however, has dropped sharply. The number of jobs decreased from 49,000 in 2001 to 27,000 in 2012. In logging, the number of jobs has fallen from 25,000 to 18,000 during that same time.

The power of union workplace safety committees — including the ultimate right of workers to walk off a job they consider an immediate threat to their health and safety — has correspondingly declined with the concessionary trend and rising threats to jobs.

The injury rate for workers in BC’s wood manufacturing industries is nearly 50 per cent higher than industry as a whole. There were 750 serious injury claims in 2012.

Meanwhile, profits have rebounded nicely for wood manufacturers in 2013 and they are holding up in 2014.

Germyn says, “The whole industry has been playing the card of plant closures and job losses ever since the rough times of the 1990s. The government backs them in this.”

The profit drive meets climate change in a perfect storm

The pine forests of BC have been destroyed by a pine beetle infestation caused by warming temperatures. The winter temperatures that kept the insect’s population in check for millenia are no longer low enough due to climate change. All the multiple species of pine forests in western North America are in serious decline as a result of the beetle’s proliferation.[1]

Wood processing companies are racing to process the dying trees while they are still salvageable. That wood is drier and therefore produces more dangerous dust in the manufacturing process.

Families United for Justice vows it will continue to fight for a public inquiry. It will also continue to advocate for the surviving injured workers who say they are getting shoddy treatment at the hands of WorksafeBC, including threats to reduce or cut off benefits and challenges to their right to return to their jobs.

The Babine and Lakeland mills are being rebuilt and will operate with fewer than half their pre-explosion staff levels thanks to investment in new technologies, funded in part by government grants. Lakeland, at least, is saying that collective agreement provisions that compensate workers for job losses due to technological change do not apply because it was an industrial accident, not a business decision, that prompted the installation of new equipment and resulting job cuts.

Throughout western North America, the capitalist system has left vulnerable the communities that are economically dependent on the forest industry. Climate change has ushered in the pine beetle epidemic and levelled entire forests. Clearcut logging practices have created their own destructive legacy. Now a frenetic drive to squeeze out the last available profit from dying pine forests is creating unprecedented dangers for the workers who cut and process the trees. Sawmills are closing, as the last of the forests is logged.

This article is slightly edited by the author from the copy published in Ricochet. Roger Annis is a writer and retired aerospace worker in Vancouver BC. He has written extensively on the 2012 sawmill explosions in BC. He worked for a brief time in a Vancouver sawmill in 1979. His writings are compiled on his website, ‘A Socialist in Canada’.

You can sign an online petition by Families United For Justice demanding a full, public inquiry into the 2012 sawmill exposions in British Columbia.