CBC disinformation on the crash of Malaysia Airlines Flight 17

Susan Ormiston was the lead Canadian Broadcasting Corporation reporter in eastern Ukraine for much of July, including after the crash of Malaysia Airlines Flight MH17. On July 29, she interviewed Michael Bociurkiw for CBC Television’s evening news program The National. 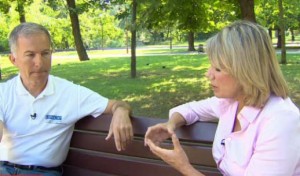 Together, the two told us nothing of substance. Or more accurately, the substance was inadvertent.[1] The interview provided a human interest interpretation of the crash and little more. Worse, it misled viewers on key events that have shaped the aftermath of the crash and its investigation.

Bociurkiw is the spokesperson of the investigation unit of the Organization of Economic Security and Cooperation in Europe. He is a Canadian of Ukraine origin.

Ormiston told viewers that the bodies from the crash “were collected and placed in trains for transport to Kharkiv”. The trains “were cold and lonely” she tells us, and Bociurkiw concurred.

The two failed to tell viewers that at the time of the interview, an estimated 80 bodies had yet to be recovered. They still lay where they fell due to a moral and legal outrage—the refusal of the governing regime in Kyiv to call a halt to its military activities in the region directed at the pro-autonomy political forces in southeast Ukraine.

In an action that has never been explained or investigated, Kyiv actually blocked access to the crash site to inspectors for four days running, beginning on July 27.

Kyiv put out all sorts of falsehoods to confuse what was happening on and around the crash site in the days following July 17. It said rebels were shelling the crash site, they had laid mines, they were preventing international inspectors from doing their work. All of this was false, but it was dutifully reported by mainstream media, or it was obfuscated by news reports saying that unnamed and unexplained “fighting” and “conflict” were blocking the investigation.

But the true story was to be found if a dedicated researcher were to look past the reporters who chose to close their eyes or obfuscate the truth. Thus, the New York Times reported on July 31 when inspectors finally re-gained access to the site, “Ukrainian officials said they had suspended offensive operations against the rebels to allow the monitors to reach the site safely.

“Commanders at Ukrainian military positions near the site confirmed that they had been ordered to halt their advance.” So here is revealed which agency had been blocking access.

Two days earlier, New York Times journalist Sabrina Tavernise, who reported from the crash site in the hours and days following the disaster, told interviewer Charlie Rose that rebel fighters created no barriers to the crash site during the time they controlled it and that the blockages that began on July 27 were instigated by Ukraine forces.

In the interview on The National, Ormiston told viewers that apart from the OSCE teams who were at the crash site for the first few days (before being blocked by Kyiv’s military rampaging), “no other officials arrived for days” to  the site. She added later in the interview, “No one was sure who was in control of the bodies, left in the fields too long”.

Here we see a deep prejudice against the local population who undertook right away the awful and painful duty of gathering the documents and bodies of the victims of the crash in the days after the plane fell. Those who led that effort apparently do not qualify as “officials”.

CBC website editors put their own spin on this dissing of local authorities in their introduction to the Ormiston-Bociurkiw interview:

Bociurkiw and one other colleague were the first international monitors to reach the wreckage after the jet was shot down over a rebel-held region of eastern Ukraine July 17.

With no other oversight on scene, the two men became the de facto eyes and ears of all those who watched in horror from around the world.

The forensic investigative team from Holland that arrived at the site on July 20 or 21 told a different story. As Reuters reported on July 21 (one week before the CBC interview), Peter van Vliet, the head of that team, spoke of the work of local people and said “I’m very impressed about the work that was done over here”. Citing the prevailing hot temperatures and large size of the site, he said: “I think they did a hell of a job in a hell of a place”.

Ormiston’s comment recalls the foul claims made throughout mainstream media in the days following the crash–that local people looted the possessions of crash victims and even defiled bodies. Here is a July 20 CBC report saying that “rebel fighters” were “piling” bodies into refrigerated train boxcars. Not “moving” or “placing” bodies into boxcars, but “piling” them.

Here is a July 21 CBC Television report airing without comment the unfounded claims of “looting” being made by Holland’s foreign affairs minister at the UN Security Council on July 21. The same report also aired the lies of the U.S. ambassador to UN that rebel fighters were blocking access to the site and “threatening” inspectors.

Then there were the reports of “tampering” of evidence. Here is a CBC report with a breathless headline reporting international “fury” over evidence tampering. The report dutifully regurgitated the Ukraine government’s absurd claim that pro-Russian “militiamen” were scheming to steal bodies away to Russia.

Even the prestigious New Scientist weekly published in the UK couldn’t resist the foul slander game. It reported in its July 26 edition, “the aircraft wreckage has been looted by the rebels—and bodies stripped of cash, credit cards and cellphones”. The magazine acknowledged that the plane’s two black boxes had been turned over to international investigators, but it wondered out loud if the boxes had first been “tampered with” by local “officials” (the same officials whose presence the CBC disregarded or ignored).

As the weeks go by and all the false claims and accusations directed against Russia or pro-autonomy rebel forces in the region recede, more truths will continue to seep out. For example, the Special Envoy of the Australian government to the crash site and investigation, Angus Houston, is cited in The Guardian on Aug. 14 saying the initial work by the “Ukrainian emergency services” was “more thorough” than international investigators had anticipated. To the point where he says that all the bodies or parts thereof that are recoverable have likely been located. Houston is the former head of Australia’s armed forces.

The Dutch-led international investigation team says it will release an initial report next month. The team says the report will not seek to apportion blame for the crash but, instead, try to establish who or what caused the plane to crash. That would be a welcome (and novel!) approach.

But in the meantime, the rush to judgment and blame game against Russia and “pro-Russia separatists” for causing the plane crash or for compromising the investigation has worked its magic. It has compromised the possibility for an understanding of the plane disaster in all its dimensions. Lost in the media hype (and unmentioned in the CBC interview with Michael Bociurkiw), for example, is Resolution 2166 adopted unanimously by the United Nations Security Council on July 21. It calls for a cessation of military and all other activity that would impede an international investigation of the crash or disturb the wreckage of the plane and the bodies of those who lost their lives.

The resolution gained a lot of publicity at the time of its adoption because of the aggressive reporting by CBC and other news outlets that was leading news consumers to assume that Russia or rebel fighters were the ones responsible for threatened disruptions to an investigation that the Resolution was addressing. Ukraine, meanwhile, resumed military operations within days of the adoption of the resolution. Few, if any, western media drew attention to this fact or asked why Ukraine would be so acting.

In early August, Russia sought a new resolution from the Security Council to prohibit any activity that would “violate the integrity” of the crash site. That effort failed because some member countries of the Council, including the United States and Australia, prevented a required unanimous consent by seeking to add inappropriate text to a resolution, notably that would blame rebel forces (or “separatists”) for this and that alleged misdeed.

The confusion, false claims and potential compromising of an investigation of the crash of Flight MH17 were facilitated by the complicity of mainstream, western media. There is now a danger that if and when an impartial investigation issues a credible report, it may not matter. Months more war and killings will have happened, prompting a much larger emergency in the region than what already exists. Let us hope that events do not come to that.

Progressive opinion in the world needs to weigh in and affect the course of events. We need to act to compel Kyiv and its NATO backers to end their war against the people of eastern Ukraine. Then the required political resolution of the conflict can take its course.

Notes:
[1] Bociurkiw raised a lot of eyebrows in the interview for a very surprising reason. He described to Susan Ormiston (six minute mark) that several sections of the fuselage were pockmarked with “what almost looks like machine gun fire. Very, very strong machine gun fire that has left these unique marks that we haven’t seen anywhere else [on the plane].” But the received wisdom broadcast thunderously by western governments and media from the get-go is that a missile brought down the plane (and, of course, that “pro-Russia separatists committed the dastardly deed).

Even more surprising is that Bociurkiw specifically refuted the missile theory. “We’ve also been asked, for example, have we seen any examples of a missile [strike]? Well, no we haven’t.”

Bociurkiw is asked if a credible investigation of the crash is possible. His answer is that is less than evident. He says that investigation experts are in the region. “As long as they can get to the site quickly, have pretty good access, collect the parts of the aircraft, ship it somewhere, I think that would be a good thing.” The implication in his reply is that access to the crash site is not quick nor even occurring. The interview was broadcast 12 days after crash. But as with his surprising admission of no evidence of a missile strike, the CBC reporter did not probe any further into this matter, either. Or if she did, her questions and the answers were left on the CBC editing room floor.

The visual images of the aircraft’s panel adjacent to the pilot seat is another refutation of the missile theory. It has a large hole in it, consistent with an ammunition (cannon) strike. See the accompanying photos. 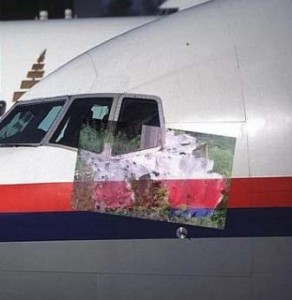 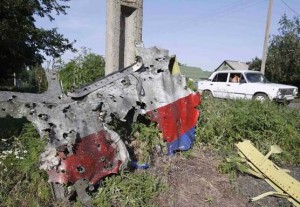 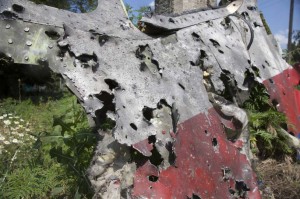