Canada’s colonial history challenged in the aftermath of protests against racists and neo-Nazis in Charlottesville, Virginia

Statues, monuments, naming of public spaces and other public commemorations of the slavery Confederacy are under intense scrutiny and condemnation in the United States in the aftermath of the riot by racists and neo-Nazis in Charlottesville, Virginia on August 11 and 12. Broad consensus has emerged for their removal from public spaces, perhaps relocating them to museums. Some local and state governments have acted accordingly.

The latest such move is high profile, involving the Washington Cathedral. Following a two-year consultation process, directors of the Cathedral have decided to remove two stained glass panels depicting two generals of the Confederate army in heroic pose–Robert E. Lee and Stonewall Jackson.

Events in the United States have turned up the heat in Canada on equivalent monuments to racism, colonialism and even genocide against Aboriginal peoples. 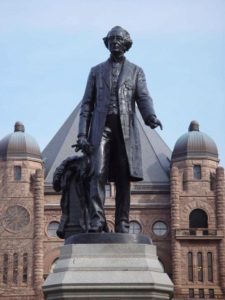 Statue of John A. MacDonald in front of the Ontario Legislature in Toronto

Enclosed below is a column by Toronto Star columnist Azeezah Kanji discussing Canada’s first prime minister, John A. MacDonald. Statues to him are everywhere in Canada. His name graces schools, a major traffic bridge in Halifax and many, many other public spaces in Canada.

MacDonald was a racist who sought the eradication of Aboriginal people, including using starvation to subjugate them. He supported the pro-slavery revolt that sparked the U.S. Civil War.

MacDonald also hated the Métis people of western Canada (the English and French settlers who integrated with the Indigenous peoples). He is known famously for his response to calls to give clemency to Louis Riel after Riel was sentenced to death for leading the revolt of Métis/Indigenous revolt of 1884/85 for political and economic rights. “He shall hang though every dog in Quebec bark in his favour,” MacDonald pronounced. (‘Northwest Rebellion of 1884-85’, in Wikipedia.)

Present-day supporters of Macdonald’s legacy maintain that he was a man of his era, so it is unfair to judge him by the standards of ours. They recite a list of other leaders with similarly repugnant records — like George Washington, who enslaved hundreds of Black people; and Wilfrid Laurier, who increased the anti-Chinese “head tax” and tried to ban Black immigration — to apparently prove that Macdonald’s views were universal for his time.

This ignores all the Indigenous, Black and Asian women and men of Macdonald’s time who never accepted the racist premise that they were inferior breeds of humanity…

Controversy over the unseemly commemorations of John A. MacDonald broke open last month when a convention of the Elementary Teachers Federation of Ontario approved a resolution, following much discussion, proposing that the government of Ontario remove commemorative mention of MacDonald’s name from public schools. 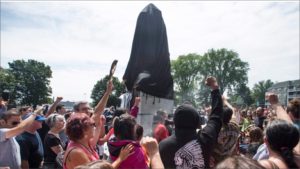 Another controversy over colonial commemoration in Canada has been taking place for several years in Halifax, the capital city of the province of Nova Scotia. The Mi’kmaq First Nations people have been leading a fight to remove a statue and street name commemorating Edward Cornwallis. He was the military leader of Britain’s establishment of the future city in 1749.

At the time, the Mi’kmaq rejected Britain’s unilateral decision to build a military (naval) base at Halifax. They fought to expel the British occupants of their territories. For several years, Cornwallis led the war to subjugate the Mi’kmaq, including paying bounty for human scalps.

On July 15, 2017, Halifax city council gave in to protests and covered the statue with a tarpaulin. A decision has not been taken on the statue’s  future.

Prime Minister Justin Trudeau has spoken out in favour of continuing to honour Canada’s colonial legacy. He told journalists on August 28:

Non-Indigenous Canadians have an essential role to play in how we shape a better and more responsible future for everyone who shares this land and these conversations are extremely important to have, to reflect on our past and to build the right future forward together.

But I can say, unequivocally, there are no plans by the federal government to change the name John A. Macdonald off of anything in our responsibility.

Earlier this year, Trudeau’s government changed the name of the ‘Langevin’ block of the Parliament building in Ottawa after First Nations people brought the matter to public attentention. Hector-Louis Langevin, a founding political leader of Canada, was an architect of the residential school system. That was a key plank of the policy of cultural genocide conducted by Canada in the 19th and 20th centuries.

Trudeau’s government has invested a great deal of political capital in the appearance of seeking reconciliation for the past and present injustices against Canada’s estimated population of 1.7 million Indigenous and Métis people.

Trudeau did no consultation of the Langevin name change, drawing complaints from First Nations people pointing out that the Parliament building sits on unceded territory of the Algonquin people.

A leading columnist of the Toronto Star daily penned a column on September 6 mocking the concerns that underlie growing demands to rename public spaces and institutions and remove monuments to Canada’s racist and colonial past. The print edition of the column by Rosie DiManno is titled, ‘Making mountains of pedestals’.

Citing the common usage in Canada of an anglicized version of the name of Italian colonial explorer John Cabot, DiManno (whose family history is Italian) wrote:

This could be condemned as a very early appropriation of an Italian accomplishment by Anglo Saxon culture…. If I were that sort of anachronous jackass, wailing and bemoaning over the injustices done to my peeps, from centuries ago to current ethnically insensitive textbooks. If I had endless whinges to pick. If I demanded an apology for Italians interned in Canada during World War II as enemy aliens…’

And, honestly, I don’t much care. Most people, I’m quite certain, don’t much care, not even about the symbolism inherent in monuments erected to extol Confederate leaders such a General Robert E. Lee…

The Star columnist appears unaware or is unconcerned that the large majority of Confederate statues and monuments have little to do with commemorating deaths of Confederate soldiers during the Civil War, as such. They were erected in the 20th century and were a key front of the ‘Jim Crow’ counter-revolution in the U.S. seeking to block the social gains for Black people that were opened up by the abolition of slavery in 1964 (13th amendment to the U.S. constitution).

The Canadian ruling class and its ideologues will be hard pressed to hold onto their treasured monuments. The country’s population is becoming less racist and more supportive of First Nations rights than ever. As Canadians of all backgrounds move the country forward, they will leave in their dust Canada’s colonial legacy and its modern-day defenders.

Background:
The early architects of Canada’s assimilationist policy against Indigenous people, commentary by Don Smith, in Toronto Star, Sept 16, 2017  (Don Smith is professor emeritus at the University of Calgary)

A turning point for Confederate monuments in the southern United States, news and analysis, with an introduction by Roger Annis, in A Socialist In Canada, Aug 19, 2017

Does Charlottesville mark a turning point for Confederate monuments In America?, by L.V. Anderson, DIGG, Aug 17, 2017

… The Southern Poverty Law Center (SPLC), a civil rights nonprofit, published a report on “public symbols of the Confederacy” in April 2016. The report was commissioned in response to the removal of some Confederate symbols in the wake of Dylann Roof’s massacre of black churchgoers in Charleston in June 2015, and it identified 1,503 monuments and other symbols nationwide.

Double standards as politicians and editorialists condemn neo-Nazism in Charlottesville, embrace it in Ukraine, by Roger Annis, A Socialist In Canada, Aug 23, 2017

Judge John A. Macdonald by standards of his day

Canada’s first prime minister should be assessed from the perspective of those on receiving end of racist and colonial violence of the times, Azeezah Kanji writes

Recent condemnations of the unsavoury aspects of John A. Macdonald’s record have drawn accusations of “presentism:” inappropriate application of 21st-century notions of justice to 19th-century history.

Canada’s first prime minister helped eviscerate the self-determination of Indigenous nations and subjugate them to colonial rule, through laws like the Gradual Civilization of Indians Act in 1857 (when he was attorney general for Canada West) and the first federal Indian Act in 1869; he deliberately inflicted mass starvation on Indigenous communities, in violation of treaty obligations, to clear the western plains for railway construction and European resettlement.

Macdonald introduced the “pass system,” which confined Indigenous peoples on reserves and prevented them from leaving without written permission from the Indian agent, an initiative that colonial officials acknowledged at the time was illegal; he was the architect of the residential school system, designed to take Indigenous children away from their “savage” parents in order to inculcate “the habits and thoughts of white men;” he criminalized Indigenous ceremonies and dances, which he deplored as “debauchery of the worst kind.”

Macdonald cheered the pro-slavery South in the American Civil War, and had family connections to the Caribbean slave trade; he justified keeping the death penalty for rape with the lie that Black men were “very prone to felonious assaults on white women;” he barred Chinese people from voting, and imposed a “head tax” on their immigration, because he believed that “the Aryan races will not wholesomely amalgamate with the Africans or the Asiatics” — a position that was considered extreme even by many of his political contemporaries, according to University of Ottawa historian Timothy Stanley.

Present-day supporters of Macdonald’s legacy maintain that he was a man of his era, so it is unfair to judge him by the standards of ours.

They recite a list of other leaders with similarly repugnant records — like George Washington, who enslaved hundreds of Black people; and Wilfrid Laurier, who increased the anti-Chinese “head tax” and tried to ban Black immigration — to apparently prove that Macdonald’s views were universal for his time.

This ignores all the Indigenous, Black and Asian women and men of Macdonald’s time who never accepted the racist premise that they were inferior breeds of humanity.

It ignores all those who spoke and struggled against the injustice of being exterminated, expropriated, exploited and excluded on the basis of white supremacist myths — for example, the Plains Cree people who protested and resisted being criminalized, starved and robbed of their lands by the Canadian government in the 19th century.

In 1884, Chief Mistahi-maskwa (Big Bear) castigated Canadian officials’ contravention of treaties supposedly signed in good faith: “Government came from far away to this place where we belong and said we must have a treaty. . . He said, ‘We are one blood, I want to help you stand on the same place with my white children, to live together like brothers. We are not going to buy your land.’ … I see [now] how government agents bring us everything crooked. They take our lands, they sell them and they buy themselves fine coats.”

And, in 1897, Chief Peyasiw-awasis (Thunderchild) objected to the unfairness of being jailed for participating in a traditional Give-Away Dance, under a law originally introduced by Macdonald: “Can things go well in a land where freedom of worship is a lie, a hollow boast? To each nation is given the light by which it knows God. . . . Why has the white man no respect for the religion that was given to us, when we respect the faith of other nations?”

Macdonald’s current defenders accuse his critics of trying to erase history, but they erase history twice: by minimizing Macdonald’s misdeeds, and by deleting those who opposed them.

The fact that other celebrated Canadian leaders held similar prejudices is not an exculpation of Macdonald, but an indictment of Canada’s historical foundations. By treating the perspectives of a handful of powerful white men as the only relevant ones for understanding the past, we perpetuate their racist legacy in the present.

Azeezah Kanji is a legal analyst based in Toronto. She writes in the Star every other Thursday.