By Roger Annis, A Socialist In Canada, Nov 16, 2017  (with postscripts further below)

On November 15, Canadian Prime Minister Justin Trudeau gave a speech to a UN-organized international conference in Vancouver of Canada’s wishes to step up foreign military intervention, under the guise of ‘peace operations’. The ‘2017 UN Peacekeeping Defence Ministerial Conference’ is taking place in Vancouver from November 15 to 17. 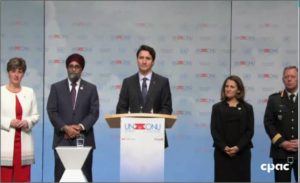 Justin Trudeau speaks to media briefing at ‘peacekeeping’ conference in Vancouver on Nov 15, 2017, flanked by his ministers and armed forces chief

Many details were missing from Trudeau’s remarks. These reflect the government’s wariness over intervening into places where volatile military and humanitarian conditions prevail, particularly in Africa. Military missteps or fumbles could easily derail the sunny public relations bubble which surrounds the government’s proclaimed ‘peacekeeping’ goals and on which Canada’s (small-l) liberal imperialists stake their reputations.

Trudeau’s pronouncement comes more than one year after Canada announced plans to send a military expeditionary force of some 600 soldiers and 150 police to ‘somewhere’ in Africa, with the northern African country of Mali most frequently mentioned. But 140 foreign soldiers have been killed in Mali since France invaded the country in 2013 and the UN Security Council followed up with a military mission separate from France called ‘MINUSMA’. As it discovered during its long military mission in Afghanistan, the Canadian government is acutely aware that deaths of Canadian soldiers in foreign lands prompt uncomfortable scrutiny and questions as to why they were placed in harm’s way in the first place.

A report in the Toronto Star on November 15 records the complaints the Canadian government is receiving from liberal imperialists that it is not moving fast enough to dispatch Canadian troops abroad. The longstanding foreign policy spokesperson of the New Democratic Party told the Star, “There are needs. If Canada really wants to show it’s back on the world stage, it needs to act.”

A report by a right-wing columnist in the National Post on November 15 voices similar complaints.

Canada is into its 14th (!) year of directing the Security Council’s ‘peacekeeping’ mission in Haiti. One would think that such an extensive experience would factor into the rather considerable discussion taking place in Canada over its plans for more military intervention abroad. But no media outlet in Canada–nary a one–has anything to say on Haiti. That’s for very understandable reasons. The UN military mission that was implanted in Haiti in June 2004–called ‘MINUSTAH’ by its French acronym–has been a disaster on every conceivable front. And many careers in the aid and charity industry–not to speak of the government’s very foreign policy reputation–depend on the disaster being hushed up.

MINUSTAH came into Haiti in order to consolidate the February 29, 2004 coup d’état against the elected president Jean-Bertrand Aristide. The U.S., Canada and France fomented the paramilitary coup and provided key diplomatic as well as material assistance to it.

The UN went on to earn infamy in Haiti following the January 12, 2010 earthquake which struck the capital city Port au Prince and killed tens of thousands. The lofty promises by the UN and by Western governments , charities and ideologues to ‘build back better’ in Haiti have proven to be lies. Adding to the lies and broken promises of rebuilding Haiti has been the cholera infection which soldiers of MINUSTAH from Nepal (Nepal?) introduced into Haiti’s largest river system, the Artibonite, in October 2010 through negligent disposal of their sewage waste. That criminal act sparked a cholera epidemic that has killed more than 10,000 people and sickened hundreds of thousands.

MINUSTAH was an illegal and criminal enterprise from its inception. But in the era of the new cold war and ‘Russia truthing’, nothing bad can be said in mainstream media of Canada’s foreign policy crimes and misdeeds. No, it’s all cheers for Canada standing up to the governments in such ‘dark and dangerous places’ as Russia, Venezuela and Cuba.

Irony abounds amidst the pleadings of liberal imperialists for Canada to step up its ‘peacekeeping.

One irony is the very term. The Canadian government no longer uses it in formal discourse. No, ‘peacekeeping’ has morphed into ‘peacemaking’ and ‘peace operations’.

Meanwhile, who are the UN forces being deployed? Some have spread cholera in their wake. Many others are guilty of acts of sexual violence and predation against the populations they are supposed to protect. An August 2015 report in Foreign Policy magazine explained:

There has been an epidemic of sexualized violence cases accompanying U.N. peacekeeping missions around the world, particularly in CAR [Central African Republic], which has seen accusations against at least 14 peacekeepers during the country’s nearly three-year crisis. In total, according to an Aug. 12 [2015] statement by Stephaney Dajarra, spokesman for the U.N. secretary-general, there have been 57 allegations of possible misconduct in CAR since the beginning of the mission in April 2014, including 11 cases of ‘possible sexual abuse’.

An Associated Press report in April 2017 explained the depraved absence of legality governing the conduct of UN soldiers:

… An Associated Press investigation of UN missions during the past 12 years found nearly 2,000 allegations of sexual abuse and exploitation by peacekeepers and other personnel around the world — signalling the crisis is much larger than previously known. More than 300 of the allegations involved children, the AP found, but only a fraction of the alleged perpetrators served jail time.

Legally, the UN is in a bind. It has no jurisdiction over peacekeepers, leaving punishment to the countries that contribute the troops…

Here in Haiti, at least 134 Sri Lankan peacekeepers exploited nine children in a sex ring from 2004 to 2007, according to an internal UN report obtained by the AP. In the wake of the report, 114 peacekeepers were sent home. None was ever imprisoned.

Yet Canada’s latest narrative twist dares to promote ‘peacemaking’ in the name of ‘protecting women and girls’. Here is the opening of a government policy statement issued on November 15, 2017, coinciding with the conference in Vancouver:

For decades, peacekeeping has helped provide protection to millions of vulnerable people affected by conflicts. However, the context for modern peace operations has changed. Today’s conflicts are intractable, more dangerous, and more complex. Given this new reality, we need to find new solutions. Canada is advancing innovative approaches to enhancing the protection of children, increasing the participation of women in peace operations, and providing the specialized capacities that the UN needs to deliver on their mandates…

Accompanying the statement is another policy statement specifically arguing how its “peace operations” will be devoted to “full respect of the human rights of women and girls”. (See postscript #2 below.)

Further grim irony is that although Canada places African countries high on its list of targets for ‘peace operations’, it has been consistently voting in recent years against resolutions at the United Nations General Assembly condemning racism and neo-Nazism. The reason for the ‘no’ votes is that Russia has co-sponsored the resolutions and they draw uncomfortable attention to Ukraine, where the extreme-right is omnipresent in the halls of power. Canada backs the extreme-right government in Ukraine which in the name of ‘decommunization’ has been renaming streets and public spaces in honour of World War Two era collaborators with Nazi Germany and has recently stripped language minorities of their right to school their children in their mother tongue.

Canada’s foreign policy has long supported or turned a blind eye to racist regimes in such places as the former apartheid-South Africa, Israel and Burma.

Coincidentally, Canada wants a UN military mission into eastern Ukraine, as well. It would serve to undermine and disarm popular resistance to the February 2014 coup which overthrew Ukraine’s elected president. But the likelihood of that is zero due to Russia’s insistence that any UN mission respect and assist in implementing the February 2015 ‘Minsk-2’ ceasefire and peace agreement. Irony upon irony, Minsk-2 (text here) was unanimously supported by the UN Security Council, only to be ignored by the three large countries providing military assistance to Ukraine’s right-wing government–the U.S., UK and Canada ).

There is no doubt that a great many Canadians care about the conditions of the world’s peoples living in conditions of material poverty and environmental degradation. Many donate to charities and devote time and entire careers to improving the lot of the world’s poor. But as the example of Haiti, the Central African Republic and countless other cases show so clearly, the source of poverty and environmental degradation is the very imperialist system which the liberal imperialists would have us reinforce with ‘peacekeeping’, ‘peacemaking’, ‘peace operations’—call it what you will.

Roger Annis is an editor of the Canada Haiti Information Project. His articles there include:

More information on the 2010 earthquake in Haiti can be found in the new book by author Tim Schwartz, ‘The Great Haiti Humanitarian Aid Swindle’. You can read a review of the book here in Haiti Liberté weekly newspaper. An excerpt from the book is published here on Axis of Logic.

Postscripts:
[1] The national affairs news reporter and two national affairs columnists at the Toronto Star weighed in on November 17 on the Canadian government’s announced plans for foreign military interventions. ‘Peacemaking’, ‘peace operations’, ‘peace support’—-take your pick of the government’s various terms for its new ambitions:

The peace support strategy calls for a new training and advisory team to work with a nation before and during a deployment to improve their own ability to conduct peace operations. It also says that Canada will contribute to training centres and schools.

… The biggest contributor of manpower to UN peacekeeping is the desperately poor African nation of Ethiopia with 8,403 personnel committed. It is followed by Bangladesh, India, Rwanda, Pakistan and Nepal. The reason why peacekeeping is popular among the governments of developing countries is that it is profitable. The UN pays contributing governments $1,332 (U.S.) per soldier or police officer per month.

The contributing government needs to pay these soldiers or police officers only their standard wage — which can be considerably less… Ethiopia, for instance, is $660 a year. Some governments pocket the difference. One study calculates that Bangladesh netted $1.3 billion (U.S.) between 2001 and 2010 from peacekeeping.

But even those that don’t skim off the top see an advantage in peacekeeping. It allows them to field bigger armies than they could otherwise afford.

The cost of all of this is borne by the richer countries. The U.S. covers 29 per cent of the annual $6.8 billion peacekeeping bill, making it the top funder. China comes in second, covering 10 per cent of the cost. Canada is ninth at 3 per cent…

[2] Meeting with the editorial board of the Toronto Star on November 24, 2017, Canadian Foreign Minister Chrystia Freeland had the following to say about the depraved conduct of UN peacekeepers which she wishes to inflict upon yet more women in impoverished countries in Africa and elsewhere:

“This is horrific. . . . I struggle to communicate how wrong it is, that UN peacekeepers who are there to protect people would actually prey upon them,” Freeland said. “That terrible reality, I think threatens to discredit the whole idea of peacekeeping,” she said.

While many steps are needed to curb such abuse, a “key way to do it is to have women peacekeepers,” Freeland said. “That is going to go a huge part of the way to fixing the problem,” she told the editorial board…