August 2020  This is a newsroll page on A Socialist In Canada, commencing September 2017. It consists of headlines with weblinks to published news articles and political analysis. Occasional commentary by the website publisher, Roger Annis, appears in square brackets [ ] ). For months preceding August 2020, go to ‘News pages archives’ on the home page of A Socialist In Canada and use the drop-down menu. To find past stories on this and other news pages on this website, use the ‘find’ (word search) function on your web browser. Headlines in red denote items published on the main news page of A Socialist In Canada.

Canada news headlines on A Socialist In Canada, August 2020

Covid-19 pandemic  News and analysis of the Covid-19 pandemic worldwide is published daily on the World news page of ‘A Socialist In Canada’ in the form of headlines, charts and weblinks. Detailed charts on the pandemic in Canada are published by the Dalla Lama School of Public Health (Toronto) here. The seven-day, rolling average of Covid-19 cases in Canada’s largest provinces as of August 3, 2020 are: Quebec 142, Ontario 99, Alberta 65, British Columbia 20.

COVID-19 conspiracy theories creating a ‘public health crisis’ in Canada, Canadian Press, Aug 3, 2020  [Here is a case of the pot calling the kettle black. Corporate and state media in Canada is awash in conspiracy theories, notably in its promotion of a new cold war against China and Russia, led by the Trump regime in Washington. The Canadian government and media normalize their Trump regime ally in Washington and share its trade and military aggression against countries and people such as Russia, China, Iran and Venezuela who dare to stand up to imperialism. They impose economic embargos and threaten coups and military aggression, all under false and conspiratorial pretexts: ‘Russia annexed Crimea and hacked the 2016 U.S. election. China is destroying democracy in Hong Kong. Iran wants to acquire nuclear weapons. Venezuela is a dictatorship.’ Thus do we see how such imperialist foreign policy weakens the fight against the SARS-CoV-2 pandemic. It undermines global cooperation and spews conspiracy theories in politics. The hypocrites in Ottawa and in editorial offices across the country are a public health threat to the people of Canada and the world. This has already been proven by their track record of criminal negligence ever since the pandemic first loomed in January 2020.]

Hockey players from abroad are welcomed in Canada as NHL stages a truncated season. If Canada can welcome the NHL, it can welcome refugees, commentary in Toronto Star, Aug 3, 2020 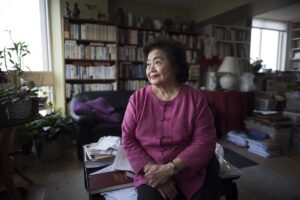 Setsuko Thurlow at her Toronto home in August 2017 (Fred Lum, Globe and Mail)

Canada must acknowledge its key role in developing the deadly atomic bomb, commentary by Setsuko Thurlow, published in the Globe and Mail, Aug 1, 2020  read the commentary here in pdf format: Canada’s role in developing nuclear weapons (Setsuko Thurlow is a Canadian nuclear disarmament campaigner and survivor of the bombing of Hiroshima. She was 13 years old at the time of the bombing.)

RCMP acknowledges only one per cent of improper force allegations against its officers, CBC News, Aug 2, 2020

Here are noteworthy ‘Canada newsroll’ headline postings from the month of July 2020:

Canada’s auditor-general will investigate the lapse in Canada’s pandemic warning system, by Grant Robertson, Globe and Mail, July 29, 2020 Canada’s Auditor-General is planning to investigate what went wrong with the country’s once-vaunted early warning system for pandemics after the unit curtailed its surveillance work and ceased issuing alerts more than a year ago… The Globe and Mail reported on July 25 [see headline story below] that a key part of the function of Canada’s Global Public Health Intelligence Network was effectively shut down last spring…
[To date, nearly 9,000 Canadians have died from Covid-19 and more than 117,000 have fallen ill due to the criminal negligence of government and medical officials in Canada. They failed to act promptly beginning in January 2020 as the threat of a global SARS-CoV-2 pandemic loomed. The failure continued even after the World Health Organization officially declared a pandemic on March 11.]

How Canada’s world-class pandemic alert system failed, special report by Grant Robertson, Globe and Mail, July 25, 2020  Months before the COVID-19 outbreak, the federal government’s early warning system went silent,  just as it was needed most. The change left Canada poorly prepared as the virus began to spread rapidly around the world.
[Successive Conservative and Liberal governments in Ottawa whittled away at Canada’s pandemic warning infrastructure formed in 2009 and known as the Global Public Health Intelligence Network. By the spring of 2019, the GPHIN had fallen silent. This contributed greatly to Canada’s failure to promptly recognize and act upon the danger of the SARS-CoV-2 virus. Political leaders and medical officials acted with criminal negligence in repeatedly declaring the SARS-CoV-2 danger to Canada as “low” (January 15, 24 and 30, 2020) and “under control” (February 26). From the article: “…On March 11, with cases in 114 countries, the WHO formally declared the COVID-19 outbreak a pandemic. It wouldn’t be until March 16 that Canada finally decided to raise its own risk assessment for Canada from ‘low’ to ‘high’ and the government in Ottawa began to urge Canadians to practice social distancing…”] Previously reported:  Ottawa had a playbook for a coronavirus-like pandemic 14 years ago. What went wrong?, by Grant Robertson, Globe and Mail, April 9, 2020   A 2006 report co-written by Dr. Theresa Tam – now Canada’s chief medical officer – predicted our current situation, and the steps needed to get out of it, with eerie accuracy. But the actual response has been very different.