Building socialism in Venezuela and the world

Kohan makes a brief reference to the New Economic Policy that governed economic policy in the early Soviet Union from 1921 until its abrupt ending in 1928. Kohan’s reference is all too brief. More problematically, it is inaccurate. This is most unfortunate because his interview otherwise contains much of value on the prospects for socialism in Venezuela and in the rest of the world.

NEP was a crucially important policy and period of time for the survival of the Russian Revolution of 1917 and the Union of Soviet Socialist Republics that came into being in 1922. It was not a policy of “market socialism”, as Kohan summarizes. It was a stage in the transition to socialism in which primacy was given to preserving and extending the alliance of workers and peasants that made possible the revolution of 1917. The Russian economy had been all but destroyed by World War One and by the imperialist blockade and military intervention that began in 1918 and lasted until 1921. Millions died in the military defense of the revolution or in the harsh conditions of life created by the imperialist intervention. 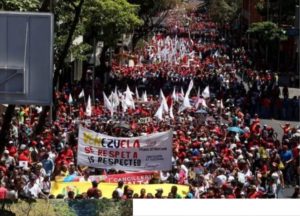 Massive march in Caracas on Feb 23, 2019 in support of Venezuela gov’t (photo by Orinico Tribune)

In today’s world, conditions for advancing towards socialism resemble much more the ‘by stages’ years of NEP than the years of relatively rapid socialist transformations that occurred in Asia, eastern Europe and then Cuba during and after World War Two. In Venezuela today, there is a crucial need to preserve the alliance of class forces—workers, farmers, Indigenous peoples, middle class and even sections of the upper classes—that constitute the Bolivarian Revolution [2] while simultaneously avoiding a descent into the fratricidal war which the U.S. and its allies wish to create.

Kohan argues in his essay that “Today, the counterinsurgency project [of the 1960s and 1970s in Latin America] continues. There is some continuity and some discontinuity.” But his explanation of the ‘discontinuity’ consists of a mere paragraph:

Today, the counterinsurgency project continues. There is some continuity and some discontinuity. I believe that we are seeing a new attempt to apply the [old] counterinsurgency doctrine in different conditions. Why does this happen? Because rebellions re-emerged, as responses to neoliberalism, which was applied at the end of the 1970s. The rebellions emerged after twenty or so years of neoliberalism.

There are resemblances to today’s imperialist interventions in Latin America and those of the 1960s and 1970s. But a great deal of positive change has occurred since then in Latin America and in the world. Kohan does not explain this. Notably, there is a growing awareness among the world’s population of the predatory nature of imperialism and imperialist democracy. One proof of this positive change is the very continued survival of the Bolivarian Revolution in Venezuela. The U.S./Canada/Europe drive to overthrow Venezuela’s sovereign government is stalling as it runs into the resolve of the Venezuelan government and people and international solidarity from governments such as Bolivia, Cuba, Russia, China and Iran.

The big danger in the world today is twofold. One is the increasing desperation of a capitalist world order in decline. This is evidenced by the rise of the Trump phenomenon in the U.S. and the parallel erosion of liberal capitalist rule in the countries allied with the U.S.; the increasing militarism of all the imperialist countries, including the U.S. renewal of the nuclear arms race; catastrophic global warming caused by expansionist capitalism; and rising social inequities.

The other danger is the string of setbacks and defeats delivered to the working classes in recent years. Coups have taken place in Haiti (2004), Libya (2011), Mali (2012), Egypt (2013), Ukraine (2014) and Brazil (2016). Extreme rightists were elected to lead India in 2014 and the Philippines in 2016. The extreme-right is resurgent in some countries in Europe, particularly in Ukraine where, though small in numbers, it shares governmental power and rules in the streets through its use of violence. The social-democratic ‘pink tide’ in Latin America has receded following the soft coup in Brazil in 2016, the turn to the right of Ecuador under its new president Lenin Moreno, the continued existence of an extreme-right government in Colombia, and election victories by conservatives in Argentina and Chile.

Much of the global left is confused by what, exactly, has taken place in the past several decades. This confusion stems from the ideological retreat that Marxism and other left-wing ideologies have suffered for decades. Ultraleftism has held sway, such as in Trotskyism’s ‘theory of permanent revolution’, while much of the Western left has adapted to the relative comforts of imperialist democracy following the rise of globalized capitalism (hyper-capitalism) beginning in the late 1970s. This adaptation is evidenced by acquiescence to imperialism’s new cold war against Russia and, increasingly, against China.

Néstor Kohan is, indeed, correct to argue for the importance of a renewal of socialist thought and practice in the 21st century. Perhaps what is called for is nothing less than a ‘rebirth’. That’s not negative–there is a great deal from the experience of the past century and more for the working classes in today’s world to build upon. Raoul Peck’s 2017 film The Young Karl Marx leaves the viewer with the uncomfortable impression that when it comes to radical political theory, it is time to return to the drawing boards.

Note:
[1] A history of the New Economic Policy and its demise is contained in Stephen Cohen’s 1973 book, Bukharin and the Bolshevik Revolution (online in pdf here). Speeches explaining and advocating the New Economic Policy were delivered by Vladimir Lenin in 1921 and Leon Trotsky in 1922.
[2] An excellent overview of the economic policies of the Bolivarian Revolution and the class alliances which underline it is contained in a new essay by Steve Ellner, in Latin American Perspectives, January 2019. You can read it here in pdf format (23 pages): Steve Ellner, Class strategies in Chavista Venezuela, in Latin American Perspectives, Jan 2019.


1.  Interview with Venezuelan socialist leader Stalin Pérez Borges: ‘It will be very difficult to defeat us’, interview published in Links International Journal of Socialist Renewal, March 2, 2019  (translated from original Spanish in Aporrea.org, Feb 8, 2019)

Edgardo Lander is a Venezuelan academic and a spokesperson for the ‘Citizen’s Platform in Defense of the Constitution’. The group campaigns for a referendum vote in Venezuela to decide whether President Nicolas Maduro, elected in May 2018, should remain in office. On February 5, the ‘Citizens Platform’ joined with other opposition groups in meeting with Juan Guaido, Washington’s choice of ‘president’ for Venezuela. The purpose of the meeting was to discuss how Venezuela would be governed if the Washington-led drive to oust President Maduro and his government should succeed. The Venezuelan Trotskyist group Marea Socialista also participated in that meeting. This was revealed in an interview with a leader of Marea Socialista published in the Trotskyist monthly magazine International Viewpoint.

On February 22, Democracy Now! broadcast a friendly interview with Edgardo Langer. Its headline called Langer “a Maduro critic”. The interview was also published in Truthout.org. Langer describes the situation in Venezuela in these terms: “We in Venezuela are faced with these two evils, with these two confronting enemies that have the Venezuelan people in between, paying for their own ineptitude, for their own violence, for their own political purpose, which are not the purposes of the Venezuelan population. We need to have some sort of pressure on the U.S. government to stop this level of intervention, this threat of military intervention. And we have to call on the Maduro government to be willing to open up a negotiation…”

In a March 2017 interview in the Spanish newspaper La Diaria, Langer termed President Maduro a “traitor”. He said, “Today in Venezuela, the fabric of society is unraveling.” He went on to slam the Cuban revolution, saying “For a great portion of the Cuban population, the fact that they have reached a dead end is obvious on an individual level, but the Cuban government wouldn’t allow that to be expressed. The Latin American left avoided it and didn’t contribute anything. But it offered unconditional solidarity…”

The interview was translated to English and published on the website of the International Socialist Organization in the U.S. Formerly part of the now-fractured ‘International Socialist’ current, the ISO has long opposed recognition of the achievements of Cuba’s socialist revolution and Venezuela’s Bolivarian Revolution. The group favours the overthrow of the Venezuelan government by what it calls a ‘revolution from below’. It published the aforementioned interview with the Marea Socialista leader. The ISO’s stated opposition to U.S. military intervention is all so much verbiage when it fails to defend the government in power in Caracas and the Venezuelan people who support it. As a reader of the ISO’s online publication put it several days ago in the website’s ‘Reader’s view’ feature, “It is relatively easy to oppose a coup at its apex, when it looks most egregious. But the attempted installation of Juan Guaidó is merely a tipping point in a years-long war on the Bolivarian Revolution. The time to analyze Venezuela’s economic crisis, ongoing since 2013-14, has been the last several years. If you haven’t been doing that and only voice criticisms now, you’re letting the U.S. dictate the international discussion.”

Another right-socialist view of Venezuela was published several days earlier in Truthout: What happened to the struggle for socialism in Latin America?, interview with Mike Gonzalez, published in Truthout.org, Feb 21, 2019

3.  Call for solidarity with Venezuela by a U.S. publication that has failed to date to provide it

A new commentary about Venezuela is published in Socialistworker.org on February 26, 2019. It makes an informative and insightful analysis of the drive by Western imperialist powers to overthrow the government of Venezuela and the Bolivarian Revolution which it leads. The commentary is most welcome because Socialistworker.org and the International Socialist Organization (ISO) which publishes it have always dismissed the significance of Venezuela’s Bolivarian Revolution. The group is coming under fire from its own members for equivocating in the face of a threatened coup against the government led by President Nicholas Maduro.

The commentary concludes with this paragraph: “So far, the attempts to mobilize sufficient internal forces to overthrow Maduro have failed. Whether they can succeed, or if the U.S. feels it can turn to the military option, will depend on how anti-intervention movements continue to resist in Venezuela — and if they can take shape in the United States.” The term “anti-intervention movements in Venezuela” is an understatement of opposition to a coup among the Venezuelan people. Resistance to a U.S. coup-intervention is being led by the Venezuelan government, the country’s armed forces, and, yes, popular forces mobilizing in the streets and in self-defense militias. On top of this, the Venezuelan people are receiving significant international solidarity from such countries as Cuba, Bolivia, Russia, China and Iran. But the commentary makes no mention of this broad array of domestic and international forces opposing a coup. Past political shibboleths by the ISO and its publication which dismissed the significance of the Bolivarian Revolution and its international support continue to show through…