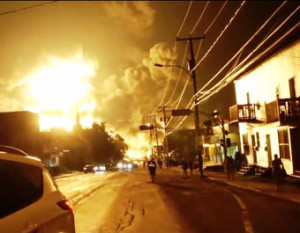 ‘It was apocalyptic. People running and screaming…At one moment I thought we would all explode.’–Resident of Lac Mégantic, Quebec on July 6, 2013


On July 6, 2013, a train carrying volatile crude oil from North Dakota exploded in Lac-Megantic, Quebec killing 47 people and incinerating the downtown. Since then, three oil trains have exploded in the United States, several others have lit up in Canada. There have also been a string of derailments of oil trains in which, thankfully, none of the wagons exploded.

The Weather Channel and InsideClimate News have teamed up to investigate the problem of exploding railcars and they’ve produced Boom: North America’s Explosive Oil-by-Rail Problem. Reporters Marcus Stern and Sebastian Jones produced an extensive print documentary report, including reporting why federal regulations to protect the public have been stalled by the railroads and the oil industry. The report is accompanied by a ten-minute video documentary that summarizes some of the findings of the report. You can watch the video here:

A lengthier video report, 23 minutes, on the same subject was produced by Vice News and published on July 28, 2014. It’s titled ‘Bomb trains: The crude gamble of oil by rail‘ and you can watch it here: