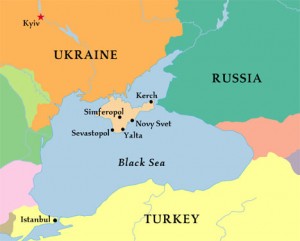 The situation of the Tatar population of the Crimea peninsula is being cited to discredit the decision in March by the people of the Crimea region to secede from Ukraine and join the Russian Federation. This article looks at some of the history of the Tatars and also at the real situation today as best it can be discerned from afar.

There is no evidence of recent, widespread human rights violations against Tatars in Crimea. This is again confirmed in a recently-published article in The Guardian. It reports on a rally in Crimea on May 18 to commemorate the 70th anniversary of the forced expulsion of Crimean Tatars during World War Two under the orders of Josef Stalin.

The Associated Press’ Nataliya Vasilyeva also reports from the rally, which took place in Simferopol, the capital city of Crimea. She says 20,000 people took part. The new Crimean authorities had reportedly issued a ban until June 6 on the holding of mass rallies. The ban was evidently ignored and there were no reported repercussions.

A May 20 AFP article cites UNHCR officials saying 10,000 Tatars have “been displaced” from Crimea and settled in Ukraine. But the article and the UNHCR report itself offer no evidence of forced displacement. They describe a tense political atmosphere in the region which might understandably cause people to move.

“Among accounts we’re hearing from displaced people is that they have left either because of direct threats or out of fear of insecurity or persecution,” said Adrian Edwards, spokesman for the UN High Commissioner for Refugees.

“Some report having received personal threats over the phone, via social media, or finding threatening messages left on their property,” he said.

Neither the AFP article nor the UNHCR report mentions the tensions being created by the civil war launched in eastern Ukraine by the governing regime in Kyiv. Nor do they report on the military moves and threats by NATO countries against Ukraine and Russia. 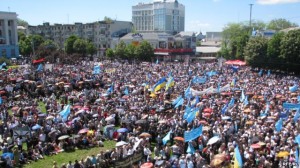 In Simferopol on May 18, 2009, Crimean Tatars commemorate the 65th anniversary of the mass deportation

It is difficult to interpret from afar the unease among the Tatar population in Crimea. Of course, we are aware of their tragic history. And modern day Russia and its Soviet predecessor waged brutal wars on two small nations in Asia several decades ago—Afghanistan and Chechnya. But nothing in the recent declarations of Russian President Vladimir Putin give reason for concern that I can see.

Indeed, he issued a decree on April 21 that restates an earlier decree in the time of the Soviet Union condemning accusations of collective guilt of the Crimean Tatar population for collaboration with the occupying Nazi German army during World War Two.[1]

“I have signed a decree to rehabilitate the Crimean Tatar population, the Armenian population, Germans, Greeks – all those who suffered (in Crimea) during Stalin’s repressions,” Putin told a State Council meeting shown live on state television.

He called for measures to encourage the “national, cultural and spiritual renaissance” of the minority groups. The decree says it aims, “to restore historical justice and remove the consequences of the illegal deportation (of the groups) and the violations of their rights.”

The decree says Russia would “foster the creation and development of national-cultural autonomies” for the groups named. Crimean Tatars have their own political assembly and the right to education in their language.

Putin met with representatives on Crimean Tatars on May 16. Afterward, he said, “We are ready to work with all people … but none of us can allow the Crimean Tatar people to become a bargaining chip in disputes … especially in disputes between Russia and Ukraine”.

There is a Republic of Tatarstan numbering four million people that is a constituent part of the Russian Federation. Its capital, Kazan, is app. 700 km east of Moscow.

Tatarstan became part of the Russian Federation following the collapse of the Soviet Union. We should learn about its experience and that of its citizens. Tatarstan’s leaders have traveled to Crimea to work with the Tatar population there.

Crimean Tatars began to return to Crimea in the waning days of the Soviet Union, in the late 1980s. Today they number some 300,000 people out of Crimea’s population of two million.

The aforementioned Associated Press report by Nataliya Vasilyeva also reported a rally of 200 in Kyiv on May 18. The 70-year old Mustafa Dzhemilev spoke to that small crowd. He is a member of the Ukraine Parliament and is apparently banned from travel to Crimea. The Guardian identifies him as an “unofficial leader” of Crimean Tatars, whatever that might mean.

In an interview on BBC (through translation) in April of this year (broadcast on NPR Radio on April 20), Dzhemilev said that life in Crimea is “just like living under a dictatorship” and he dismissed the April 21 decree by President Putin.

Dzhemilev was asked whether the fascist and rightist parties in central and western Ukraine might be a threat to the Tatars in Crimea. He said there are no parties in the Ukraine parliament that might be such a threat; all of them are united in their respect for Tatars and their willingness to give Tatars “all sorts of support”. Any one of them, he said, is “ten times more democratic” than Vladimir Putin’s party [government].

Dzhemilev is speaking of a governing regime in Kyiv in which fascist and rightist parties hold important ministerial posts and which has launched a civil war against its population. As I write these lines, CBC is reporting the shelling of the city of Slavyansk by the Ukraine army and its allied, rightist and fascist militias.

This shocking video on You Tube shows the killing of several residents of the town of Krasnoarmeysk in eastern Ukraine by fascist gunmen on May 11. The gunmen came into the town to disrupt the autonomy referendum being held that day. 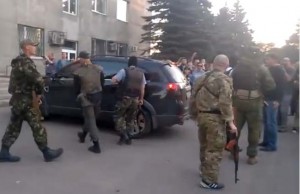 Residents of the town of Krasnoarmeysk in eastern Ukraine confront fascist gang that has come into their town. The fascists killed two people.

In the video, residents confront the gunmen in front of a building and shout, “Why did you come here? Who are you going to conquer? Go back to your hell”. The gunmen step back into the building, firing their weapons into the air. As they do so, one of their associates fires from the second floor of the building, killing two residents and injuring several more.

Political freedoms in western Ukraine are under violent attack by a rising fascist movement and a governing regime that is captive to such forces. Candidates in the presidential election of May 25 have been threatened, rightist candidates openly boast of launching civil war in the east of the country, and leftist parties and groups have been forced to close offices and go underground.

International media is largely censoring news of the rightist violence. Unfortunately, so too are many voices and publications in the international left.

Also being censored are the long-standing demands for political autonomy in western Ukraine of the Hungarian population, which numbers some 150,000, and the Carpatho-Rusyns. There are an estimated 1.2 million people of Rusyn origin, but their exact numbers in Ukraine are unknown because Ukraine refuses to list them as a distinct ethnicity on its census forms. (More on Rusyn history here.)

There is an urgent need for solidarity with the popular rebellion in eastern Ukraine and with progressive forces throughout the country. We should continue to monitor the situation of Tatars and other minorities in Crimea and speak out in their defense as needed. But their situation should not be allowed to blind us to the much more important and deadly threat of the rise of rightist and fascist forces in Ukraine.

Notes:
[1] The history of the Tatars and World War Two has been debated for decades in Russia and the Soviet Union. You can find excellent, supplementary material in the 1968 book edited by Valdimir Petrov ‘June 22, 1941: Soviet Historians and the German Invasion’. The book consists largely of a manuscript published in the Soviet Union by Aleksandr Nekrich in 1965. The manuscript’s history of the German invasion is excellent, as are the two authoritative books by New Zealand-born, Australian historian David Stahel: ‘The Battle of Kiev’ (2011) and ‘Operation Barbarossa and Germany’s Defeat in the East’ (2009).