BC teachers strike over, leaving salaries and public education short-changed 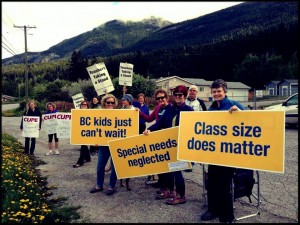 BC teachers picket line in Golden BC, 2014

The 41,000 public education teachers in British Columbia have voted by 86 per cent to end a four-month long strike (five weeks of classroom time in June and September) and accept a new, six-year collective agreement. Enclosed are weblinks to articles that detail the strike’s achievements and its shortfalls.

The outcome is a disappointment to many teachers and other advocates of public education. It fails to resolve the key issues of classroom size increases and special education services cuts that have been in dispute for more than ten years. Education cuts have been imposed by successive conservative (Liberal Party) governments since the Liberals returned to power in 2001. This settlement fails, in particular, to undo the harsh cuts that were implemented by the Liberals in 2002-03. The education minister at that time was Christy Clark, today the premier of the province.

The $75 million Education Fund in this agreement replaces a Learning Improvement Fund introduced in 2011. It is touted by the government as a big commitment to improving education services. Victoria teacher Tara Ehrcke provides a refutation of the government claim in an article on her blog, Classroom Confidential.

The settlement also continues ten-plus years of BC government policy that has kept salary increases for public service workers well below the rate of inflation (including the ‘net zero increase’ wage policy imposed on other public sector agreements that funds salary increases by cutting benefits or working conditions).

The agreement is especially frustrating for teachers because their negotiating team had several favorable decisions by the BC Supreme Court in its pocket as bargaining for a new collective agreement began earlier this year. The Court ruled in favour of the union in April 2011, saying the government cuts (special laws) in 2002-03 and the accompanying tearing up of provisions in existing collective agreements were in flagrant violation of the law.

The government responded by rewriting the offending laws. That was ruled illegal by another decision of the Court in February 2014. That ruling also had harsh words for the government’s deliberate provoking of a strike in 2012 which it swiftly declared “illegal”. (See BC government appeals court ruling slamming its abuse of public education and bargaining rights of teachers, by Roger Annis, Feb. 14, 2014.)

The government response to the February 2014 court ruling was yet another “whatever”. The court-ordered remedy–to restore cuts to education services and to compensate teachers who suffered financially–would be exceptionally expensive. Instead, the government launched an appeal of the decision and refused to bargain in good faith in the new round of collective bargaining (just as in 2011). A full strike began in June and carried over to September.

The strike in June brought an abrupt end to the school year, seriously disrupting the lives of students in grade 12 planning to move on to post-secondary education. It then dragged into the new school year, a serious inconvenience for students and parents. But the government was saving a bundle of money on teachers’ salaries and it hoped that parent exasperation as well as mounting financial pressure on teachers would favour its bargaining position effectively ignoring the Supreme Court’s rulings.

With no end to the strike in sight and personal finances of teachers getting squeezed, union negotiators opted for a compromise on the fundamental issues. An article in the Sept 20 edition of the Globe and Mail reports the process whereby Premier Christy Clark and BCTF President Jim Iker arrived at a personal understanding to seek a settlement. The new president of the Canadian Labour Congress, Hassan Yusseff, played a key role in bringing the two together.

Public support for the teachers was widespread. Members of other unions solidly backed them, pledging millions of dollars to the BCTF’s strike fund in September. Significant numbers of students were speaking out and protesting in support of the teachers’ goals. Teachers and parents held frequent protest actions to draw attention to the cause of public education. The group Allies for BC Public Education was formed.

So why were teachers unable to push back the government and win what even the Supreme Court said was just and reasonable?

The simple explanation is that broader mobilizations of popular support were required if the teachers’ cause was to prevail. Mass street marches, pickets of offices of the elected members of the governing party and the corporate backers of the government’s anti-social and anti-environment agenda, and solidarity actions by education supporters in other provinces and even the U.S.(where teachers in Chicago and Washington state have waged recent struggles) would be needed. In sum, the potential power of the trade union, social and political organizations of the working class was not sufficiently mobilized.

To be sure, there were impressive acts of solidarity throughout the strike. These emerged particularly in September as teachers, parents and students took initiatives. But many came late in the strike when financial pressures on parents and teachers were mounting rapidly.

Complicating matters was a tactic chosen by BCTF leaders in September that disoriented the strike. They began demanding that the disputed issues be sent to binding arbitration. Picket lines would come down and school would resume. A referendum vote of striking teachers was held on Sept. 10 and 99.4 per cent voted in favour of the proposal.

The BC teachers strike, like the teachers strike in Chicago in 2012, has taught that new and extraordinary methods of struggle are required to wrest social improvements from globalized capitalism and to chart a path to a new society of social justice. A big shakeup is required in the trade unions in order to break from the routinism and conservative political outlook and orientation that predominates. Public sector workers in BC are suffering from entrenched patterns of disunity and lengthy, sub-standard collective agreements. Private sector workers suffer lengthy strikes, such as the workers at the giant IKEA store in the Vancouver suburb of Richmond who have been on the picket line since May 2013. For some workers, the decline of workplace safety standards is becoming fatal–four workers died and dozens were injured in two sawmill explosions in BC in 2012 and no formal inquiry was ever held.

There will be much discussion and debate in the months ahead of the lessons of the BC teachers strike. The great spirit of solidarity and social purpose that marked the strike is an important achievement that can inspire and strengthen the working class movement as a whole.