The lengthy strike by truck drivers at the Port of Vancouver BC who move half of the port’s shipping containers has been settled. An agreement was reached on March 26 that will see an increase of 12 per cent to the rate paid to truckers to move each container. 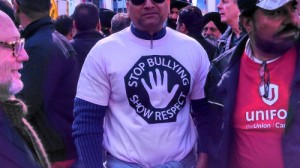 The contentious issue of waiting times to pick up or offload shipments is also addressed in the agreement. Measures will be taken to reduce waiting times, and truckers will be paid modest amounts for the time they are kept waiting to load or offload.

The agreement covers some 250 truckers who drive company-owned rigs and are members of the Unifor union, and more than 1,000 owner-operator, ‘independent’ truckers.

As negotiations came to a head, the British Columbia government withdrew a threat to order the unionized truckers back to work. Simultaneously, the Port of Vancouver, a federal government agency, withdrew its threat to refuse to renew the licenses of striking independent truckers that allow them to move in and out of the port.

Although the transportation industry in Canada is federally regulated, it was the BC government that moved to order unionized truckers back to work. For reasons that are unclear, the federal  fobbed the matter off to its provincial partner.

Vancouver is Canada’s largest ocean port. The news of the settlement is not surprising. The Port of Vancouver’s aggressive stand towards the truckers was a public relations fiasco waiting to unravel because the port hasn’t granted per-container rate increases to truckers since 2005. Following the signing of the agreement, Unifor National President Jerry Dias said that unionized truckers were prepared to defy a back to work order. Independent truckers had said they would not return to work under the slave labour rates to which the Port was apparently sticking.

Another impetus to the agreement is the great rush with which the fossil fuel industry in Canada and BC is pressing to expand the extraction and export of tar sands bitumen, coal and liquefied natural gas. There are billions to be earned by these climate wrecking projects and the industrial unions in BC and Alberta are largely supportive. But the fossil fuel tycoons in other countries are racing with equal or greater speed to open new projects. So prolonging and worsening a nasty dispute over the modest rates paid to truckers to move containers in and out of the port was hardly an intelligent course of action for the Port on behalf of industry.

Fittingly, as the ink was drying on the agreement with port truckers, Premier Christy Clark was rushing off to Ottawa to try and speed up approval of LNG proposals for the BC coast. She says the industry will have a ‘transformational’ effect on Canada and the world, and she’s right about that. The Intergovernmental Panel on Climate Change issued a new report today with some scary projections. It says the world is “ill-prepared” for catastrophic changes to weather patterns, ocean levels and many other features of the world as we know it if the ‘transformations’ that the oil and gas industries and their political representatives such as Ms. Clark want to bring about, ie continually rising greenhouse gas emissions, actually take place.

One of the jurisdictions that the gas industry and Christy Clark are rushing to beat to the LNG starting line is just south of the border, in Oregon. The U.S. Energy Department has approved an LNG plant there, the seventh such approval in the U.S. Several dozen (!) more applications to build LNG terminals have been made in the U.S.

My March 14 article in the Vancouver Observer reporting on the stakes in the truckers strike is here.