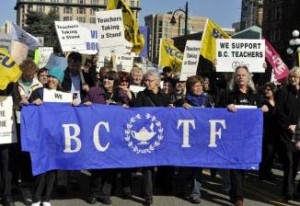 VANCOUVER — The British Columbia government has decided it will appeal a damning BC Supreme Court ruling on January 27 that said the province has grossly violated the bargaining rights of teachers and Canada’s constitution since 2002.

In an action brought by the BC Teachers Federation in 2012, the court voided 2002 legislation that stripped teachers of the right to bargain class sizes and special education services and which interfered in other ways with the right to collective bargaining.

This is the second such victory by the union. A similar favorable ruling was won by the union in April 2011. But the Liberal government of Premier Christy Clark responded to that rebuke by simply writing a new law (Bill 22, in February 2012) that was identical in its essentials to the unconstitutional laws from 2002.

The ruling by Justice Susan Griffin means that the actions of education authorities since 2002 are now subject to review and appeal. The judge also awarded $2 million in damages to the BCTF.

Education Minister Peter Fassbender explained the government’s decision to appeal the ruling by saying, “In practical terms, the judgment is completely unaffordable for taxpayers.” But UBC Professor of Law Joel Bakan writes in a Feb. 11 commentary in the Vancouver Sun:

As a ground for appeal, this is a non-starter. The Supreme Court of Canada has consistently held that, as one of its early decisions states, “budgetary considerations cannot be used to justify a violation (of the Charter of Rights).” The point was reiterated by the Court in its 2007 case concerning health workers’ bargaining rights [in British Columbia]. “Courts will continue to look with strong skepticism at attempts to justify infringements of Charter rights on the basis of budgetary constraints,” the Court said.

The ruling is not only a political embarrassment for the government, it  also deals a blow to its budgetary planning, which is heavily skewed to freezing or reducing spending on social services while boosting subsidies to the fossil fuel and other industries.

An early example of the bind in which the government finds itself is a Feb. 12 open letter to Premier Clark and Minister Fassbender by Patty Bacchus, chairperson of the Vancouver School Board. Bacchus writes, “As you know, the decision of the BC Supreme Court against government has put most, if not all, BC school districts in some level of violation of their collective agreements with teaching staff. This is causing an extreme level of uncertainty in our district as we work through the process of getting into compliance with our agreements as quickly as possible.”

The letter sets out a series of measures she says the government should now implement:

Government assure all school boards that government will take full financial responsibility for any costs arising from grievances, arbitrations and legal actions against boards that are now not in compliance with their collective agreements with teachers due to the recent ruling of the BC Supreme Court.

Government provide adequate funding to districts to enable them to be in compliance with the collective agreements that are now back in effect.

Government restore education funding to a level that enables school districts to restore all service levels to the equivalent of those provided in 2002 (see the VBE’s Restoration Budget that was submitted to government in 2013, attached), adjusted for enrolment and inflation.

Government make sincere efforts to bargain a resolution for any retroactive claims for board non-compliance with collective agreements due to Bill 28, 27 or 22.

Coincidentally, Christy Clark was the education minister in 2002 who brought in the legislation that the BC Supreme Court has twice now ruled to be unconstitutional.

The court ruling and the government’s decision to appeal it has sparked an intense discussion in the province on the declining standards and achievements of public education. Much of this discussion is focused on the failings of 12 years of cuts to education services by successive Liberal governments and the harsh attacks on bargaining rights that were part and parcel of that.

A press release by the BCTF on January 27 notes further about what has happened to public education in BC since 2002:

BCTF President Jim Iker responded to the government’s decision to appeal the judge’s ruling at a news conference on Feb. 4. He said, “By announcing their intent to appeal B.C. teachers’ important and historic court victory, Christy Clark’s government has shown they think they are above the law.

“The government has broken the law, the Constitution, twice. But, they continue to put their own political agenda before students.”

Government conspired to provoke a strike

A downright explosive part of Justice Griffin’s ruling is her finding that Clark’s government deliberately sought to provoke a strike of teachers as part of its stonewalling during a tough round of collective bargaining in 2012. The judge wrote, “The government thought that a teachers’ strike would give the government a political advantage in imposing legislation that the public might otherwise not support.”

The government believed a full strike by teachers would swing public opinion over to its stand to freeze funding for public education and continue stonewalling any negotiation over class sizes and special education needs. If a strike happened, the government would move swiftly to declare it ‘illegal’.

On Feb. 13, the NDP opposition read out in the provincial legislature excerpts of testimony before Justice Griffin last September by Paul Straszak, the government’s chief negotiator with teachers in 2011-12. Under cross-examination by the BCTF’s lawyer, Straszak was asked, “So your objective as government was to increase the pressure on teachers to have them go out on a full-scale strike?” He answered, “Yes, I’ll say that’s correct.”

Clark and Fassbender have emphatically denied that such a strategy existed. So they were asked in the Legislature on Feb. 13 if Straszak had perjured himself in his court testimony. Attorney General Suzanne Anton, until recently a failed Vancouver municipal politician, refused to answer the question.

Ultimately, the government was forced into a standoff in the form of a mediated settlement in June 2012 that left disputed issues such as classroom sizes unresolved. Teachers waged three days of rotating strikes in March and were enjoying strong support from students and from the population as a whole. The government brought in legislation (Bill 22) that ordered an end to any job action and threatened draconian penalties for violations.

The BCTF wants to see the government documents that Justice Griffin viewed in making her determination about the government’s conduct in those negotiations. She issued a publication ban during her proceedings, in the name of protecting cabinet confidentiality. That ban will soon be up for renewal.

The two court rulings on education are the second such legal rebuke of the anti-union policies by successive BC Liberal governments beginning in 2001. In 2007, the Supreme Court of Canada ruled that the Liberal government of the day violated the Canadian Constitution in 2002 when it tore up collective agreements in the public health care system. The government privatized more than 7,000 non-medical jobs in hospitals and cut the salaries and benefits of remaining employees. The court said the government violated its obligation to negotiate in good faith with the affected unions, notably the Hospital Employees Union (a division of CUPE).

The remedial measures of that ruling were limited to financial compensation for the more than 7,000 workers who lost their jobs as public service workers ($68 million in total). But the HEU built on the court ruling to assert anew its right to negotiate over any further contracting out of jobs, and it convinced most privatized workers to join (or in the case of many workers, rejoin) the union. Together, the workers and the union won important improvements to the exceptionally low wages and work conditions to which the original government action had condemned them.

Writing about the 2007 decision, Michael Lynk, associate professor of law at the University of Western Ontario, said, “As with any Supreme Court decision, Charter watchers must avoid the temptations of irrational exuberance… For all its constitutional vigour, the Supreme Court’s ruling has visible weaknesses: the ‘substantial interference’ standard is quite demanding, and the decision’s focus on legislative process may well enable cunning governments to meet the consultation requirements without curbing their objective of rolling back statutory or bargained employment rights.”

Bargaining for a new collective agreement with teachers is underway. The government’s decision to appeal its harsh losses in the courts will only delay and complicate matters.

In other public sector bargaining, the government has signed five-year collective agreements with some 67,000 public sector workers. These contain wage increases of 5.5%. Most of the affected workers are members of the BC Government and Services Employees Union; they also include the 16,000 members of the Health Sciences Association (health professionals).

The new agreements introduce a novel feature. The government says it would pay up to one half a per cent wage increase for each year that growth in provincial GDP exceeds a pre-determined formula.

There are app. 300,000 unionized public sector workers in British Columbia, including some 40,000 teachers. The province has the smallest per capita public sector of all provinces in Canada.

This article was first published in the Vancouver Observer and Rabble.ca. It is an updated composite of two articles published on Rank and File.ca.