BC, Alberta governments press ahead on plans for tar sands pipelines and exports

By Roger Annis, Oct 17, 2013, first published on the Vancouver Observer 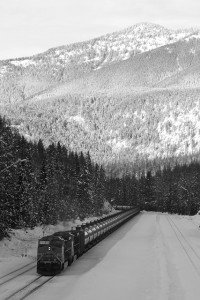 Oil trains coming to BC coast? Pictured is a westbound oil train in Montana.

Last summer, the then-unelected premier of British Columbia, Christy Clark, hit the ‘pause’ button on promotion efforts for the Northern Gateway tar sands pipeline across northern British Columbia. She said that ‘five conditions’ had to be met in order for the project to proceed. The premier postured as a critic of the Alberta and federal governments and said she was ‘standing up for British Columbians’ to gain a bigger share of revenues from the project.

Three of the conditions to be met were oxymoronic notions of ‘environmental protection’ from the consequences of pipeline breaks or ocean tanker accidents, while a fourth said that “legal requirements” regarding First Nations consent must be met. The only one of the five conditions for Northern Gateway that really counted for Clark and her party was the one seeking a greater share of revenue for provincial government coffers and for the BC companies that will partner with Enbridge Inc. in the project.

Clark rode to electoral victory in May of this year due in part to illusory and reckless claims that fossil fuel projects will provide a prosperous future that British Columbians cannot afford to turn down. The Northern Gateway pause and the five-conditions ruse were needed so that the pipeline would not become an issue in the election and because the BC, Alberta and federal governments, along with the oil industry, needed to fashion new strategies in the face of the ‘wall of opposition’ that the proposed pipeline is facing in the BC north, particularly from First Nations.

Clark received praise from some quarters in the environmental movement for her five conditions, with some even claiming that the premier was ‘opposed’ to Northern Gateway. The NDP leadership contributed to the misunderstanding, and to its surprise electoral defeat, with its overall equivocating over the environmentally destructive Alberta tar sands and its ‘positive’ election campaign precluding critical examination of fossil fuel projects. That included Clark’s proposed, parallel vast expansion of natural gas fracking in the BC northeast (which the NDP supports).

NDP leader Adrian Dix was actually pilloried by many in his own party and its trade union base for coming out mid-campaign in opposition to the other proposed tar sands pipeline in BC—Kinder Morgan’s Trans Mountain line.

Some of Clark’s critics may have been lulled by the talk of the five conditions. But meanwhile, Enbridge is flooding BC with pro-pipeline advertising, and Clark and her government have been working furiously behind the scenes with the Alberta and federal governments to realize the project. The details and contours of that effort are slowly being revealed.

The BC and Alberta governments have created a ‘working group’ to rejig and adjust the ‘five conditions’. A ‘terms of reference’ document was released on Oct 15 and is to be further elaborated and finalized by the end of the year. One of its provisions, incredibly, consists of a threat that if tar sands pipelines are defeated by public and environmental concerns, then the toxic product will be moved by rail instead. “If pipelines are not developed, rail will step into the void to deliver bitumen to the West Coast,” says the ten page document.

That threat is confirmed by BC’s deputy premier Rich Coleman. It echoes the editorials published last month in the Vancouver Sun and Calgary Herald (leaving the reader to wonder, in passing, whose proposal it was in the first place—industry, governments or the newspapers?). The delivery destination is said to be Prince Rupert on the northern coast, an existing terminus of CN Rail.

Premiers Clark and Redford will meet in Vancouver early next month to press forward with their joint effort. This will set aside, once and for all, the charade staged by Clark beginning last year that she is in some sort of deep conflict with Alberta and Ottawa over the benefits to accrue from Northern Gateway. As the Globe and Mail recently reports, “Discussions between Ms. Clark and Alberta Premier Alison Redford were, as they both put it at the time, “frosty” last October, but have warmed considerably since the two leaders met in June” (one month following Clark’s surprise election victory).

In the wake of the oil train disaster in Lac Mégantic, Quebec and the two oil train derailments in Calgary this past summer, this new oil-by-train threat will be a difficult sell. It’s hard to tell how much of it is serious and how much is just pressure and bluff to win the pipeline. Thompson writes further, “Some environmental groups see this as intimidation. That’s only because it is.

“As threats go, it might not be as dramatic as finding a severed horse head in your bed but it’s hard to miss the message.”

The threat will certainly not assuage opposition to tar sands transport through the province.  Geraldine Flurer, coordinator of the Yinka-Dene Alliance in north-central B.C., told the Vancouver Sun that transporting oil by rail is not acceptable to First Nations already opposing pipelines. “Just imagine if there was just one accident — there would be devastation,” she said.

A letter last January by many of BC’s largest environmental groups warned CN Rail it would face stiff opposition if it proceeded with its reported interest in oil by rail.

Environmental groups in the U.S. that have been instrumental in blocking the approval process of the Keystone XL tar sands pipeline are increasingly turning their attention to the tar sands export platform that the industry would like to create on the BC coast. Though the Northern Gateway and Trans Mountain Pipelines do not cross U.S. territory, the 700 or so ocean-going tankers required to transport their product annually are a direct threat to U.S. coasts and waters, say th4 groups. Not to speak of the health of the world’s climate.

The Vancouver Observer has recently reported that Port Metro Vancouver may be engaged in a stealth plan to create an oil by rail export terminal. It also has considerable capacity to expand coal exports, including the bizarre proposal of locating a new coal terminal (Fraser Docks) in the geographic center of the city. Nothing has been formally decided or announced on oil by rail, but the concern the author, Carrie Saxifrage, voices must be taken seriously.

The other tar sands pipeline proposal in BC—Kinder Morgan’s Trans Mountain line expansion—news of which sometimes gets lost amidst all the publicity surrounding Northern Gateway, is getting more and more attention,  including a flotilla protest on October 12 and a main gate sit-in at the company’s existing oil export terminal in Vancouver harbor.

So the fossil fuel cabal is right to be concerned. Its money and determination, sadly, indicates some tough slogging ahead for the defenders of Mother Earth.

Roger Annis resides in Vancouver and can be reached at rogerannis(at)hotmail.com.