An arts columnist in Canada’s Globe and Mail national daily has penned a column calling for readers to protest the appearance in Toronto this coming November 10 of the Mariinsky Orchestra based in St. Petersburg, Russia and its renowned conductor Valery Gergiev. 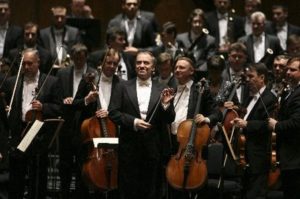 Kate Taylor’s column appeared in the Globe edition of Saturday, July 22. It voices extreme, anti-Russia prejudice. It is titled ‘Toronto’s hosting of pro-Putin conductor Gergiev and his sexual politics is problematic’. An example of the extreme language wielded in the column is the description of Russia as “a Soviet Union minus only the gulags”.

The source of the columnist’s ire is a statement made by Valery Gergiev… more than four years ago. At that time, he offered an opinion on Russia’s controversial law that prohibits the dissemination of information to children and young teenagers under the age of 16 about gay, lesbian or transsexual orientations. He is said to have told a Dutch journalist at the time that the law was intended to protect children from pedophilia.

Responding at the time to critics of his stance on the law, Gergiev said he has no prejudice or ill will against anyone due to their sexual orientation. He said the proof is in his professional work with the thousands of people he encounters. But that isn’t good enough for the Taylor, who writes that his words back then amounted to saying ‘Some of my best friends are gay.’

Taylor’s column gives voice to a statement by a rights advocacy group in Toronto called ‘Egale’ that has called on Roy Thompson Hall, the planned venue for the November concert, to silence the orchestra and conductor by cancelling their performance.

There is a precedent for a cancellation, and the Globe columnist makes favorable reference to it. In April 2015, the Toronto Symphony Orchestra cancelled two performances by world-renowned concert pianist Valentina Lisitsa under pressure from right-wing voices among Ukrainian-Canadians. The right-wing Ukrainians were angry at Lisitsa’s outspoken opposition to the war in eastern Ukraine that was launched by the governing regime in Kyiv in April 2014 and continues to this day.

The Lisitsa cancellation stirred widespread condemnation at the time from the arts community and from most journalists who weighed in. The protesting journalists included an editor at Taylor’s own Globe and Mail. But then-TSO president Jeff Melanson refused to back down from his decision. (Melanson resigned his TSO position nearly one year later amidst a court action by his wife of nine months seeking annulment of their marriage. She claims he married her for money and to shield himself from sexual harassment allegations at his previous job at the Banff Arts Center. The case is ongoing.)

If an outright cancellation doesn’t happen, Taylor writes, then “a gay-pride parade down Simcoe Street [the location of Roy Thompson Hall] on Nov. 10 would seem to be in order.”

As Taylor’s column makes clear, Gergiev’s alleged views on the Russian law are but a pretext for writing a sweeping diatribe against the Russia government and the people of Ukraine and Crimea.

Taylor provides a skewed interpretation of the war in eastern Ukraine when she calls Crimea’s 2014 secession from Ukraine an “annexation”.

The war was initiated by the right-wing government that seized power in Kyiv following the violent overthrow of Ukraine’s elected president, Viktor Yanukovych, in February 2014. It has been waged exclusively on the territory of those rebelling against the Yanukovych overthrow. Far from espousing “separatism”, as so commonly claimed in the West, the rebel republics of Donetsk and Lugansk argue for a form of federalism for Ukraine. Ironically, their vision of federalism would not be hugely different than the constitutional makeup of Canada, which includes large degrees of formal and de facto autonomy for the province of Quebec.

Donetsk and Lugansk want strict adherence to the terms of the Minsk-2 peace accord that was signed in February 2015 and which envisage federalism. But Ukraine’s leaders have systematically violated Minsk-2 while their backers in the West have sat back and watched or outright encouraged defiance. Worse, the U.S., Britain and Canada are providing direct military assistance to the Ukrainian military.

Following Yanukovych’s overthrow, the people of Crimea were threatened with military intervention by the new regime in Kyiv if they did not halt protests and submit to the new, illegitimate constitutional order. Right-wing paramilitaries (soon to be described in the West under the euphemism ‘volunteer brigades’) began to infiltrate the peninsula and threaten and attack the protest movement.

Crimeans had voted by a large majority for Yanukovych in the 2010 election. They had also endured nearly 25 years of unresolved grievances in post-Soviet Union Ukraine. The real annexation of Crimea occurred in 1954 when the territory was attached to Ukraine by an administrative decision of the Soviet Union with little meaningful public consultation. So it’s no surprise that the people of the peninsula voted overwhelmingly on March 16, 2014 to secede from Ukraine and join the Russian Federation. Where else could they turn for support? Certainly not to the governments in Europe and North America—they had encouraged and financed the ‘Maidan’ coup of February 2014.

Conveniently for her argument, Taylor makes no mention of the harsh economic sanctions imposed against the Crimean people by the U.S., Canada and Europe during the past three-plus years. She is silent about the violent actions of Ukrainian extremists in 2015 that severed the road and rail connections between Crimea and Ukraine and blew up the electricity transmission lines serving Crimea from Ukraine. Far from stopping the extremist violence, the government in Kyiv endorsed their actions; a near-total blockade of Ukraine-Crimea commercial ties remains in place. It should be no surprise that polls of the Crimean people (including one that was conducted by a German firm and financed by the Canadian government!) showing very high rates of satisfaction with the referendum decision. [1]

Despite all this history, Taylor calls the Crimea referendum vote a “Russian annexation”.

Taylor calls the democratically elected Russian government an “authoritarian regime” and makes a further description of Russia in these words: “For his [Putin’s] opponents, freedom of speech is a dangerous fantasy and many institutions are now effectively under state control.”[2]

In upholding the Valentina Lisitsa precedent, Taylor resorts to smear. She calls the pianist “a member of the Russian minority in Ukraine” and says she is guilty of “posting racial slurs against Ukrainians on Twitter” (following the 2014 coup).

The accusation of racial slurs is false. As Lisitsa explained at the time, she was the victim of false and malicious translations of Twitter comments by her. The accusation is all the more  off the mark because, like so many Ukrainians, Lisitsa is of Ukrainian-Russian parentage and she has made abundantly clear that she retains a love of the Ukrainian culture with which she grew up.

It is misleading to refer to a ‘Russian-language minority’ as a distinct political entity in Ukraine. This infers something akin to Canada’s French-language nation of Quebec or Spain’s Catalan and Basque nationalities. In reality, Ukraine is a deeply multinational country with its culture and social fabric being something of a model of coexistence of different peoples and languages.

The right-wing government in Kyiv is trying to break up Ukraine’s social harmony with its extreme, anti-Russia ideology and laws, such as its ‘decommunization’ law whereby names of streets, towns and cities are being changed to ‘cleanse’ the historic record of the era of Soviet Ukraine. But poll after poll shows that same government to be immensely unpopular. As its failings on social and economic policy have piled up, the number of Ukrainians who ‘blame Russia’ for the country’s ills has dropped.

Chechnya accused, but what are the facts?

The issue of the rights of gays and lesbians in Chechnya comes into Taylor’s column because the aforementioned group in Toronto that is seeking a ban of the Mariinsky Orchestra performance happens to accuse the government of Chechnya of vast human rights crimes. Chechnya is a republic of the Russian Federation and Taylor accepts the accusations against it at face value.

Chechnyan authorities are accused, variously, of murdering scores of gays and lesbians, or detaining and torturing scores in concentrations camps, or otherwise making life difficult and dangerous. The accusations erupted in April 2017 in the Russian liberal newspaper Novaya Gazeta. The newspaper has recently updated its accusations, now saying that as many as 56 men have been killed for being gay.

In May, I wrote a commentary in which I noted the lack of documentation of the accusations. The accusations still float in cyberspace, a curious state of affairs considering the gravity of what is alleged. Could it be that the professed concern is merely a platform for voicing already existing prejudices against Russia? Where is the follow-up reporting in Western media, for example, of President Vladimir Putin’s promise in May to Russia’s human rights ombudsperson Tatyana Moskalkova that he would discuss with legal officials the accusations levied against Chechnya?

Chechnyan leader Ramzan Kadyrov has told interviewers that there is nothing to the story because there are no gay or lesbian people in Chechnya. He says that would be antithetical to Chechnyan history and culture. While that is, indeed, prejudiced (sexual orientation is as diverse among humans as is skin colour), it’s a long way from prejudice to “concentration camps” and “mass executions”. Few would argue, for example, that Donald Trump’s recent proscription of transsexuals serving in the U.S. military heralds the imminence of concentration camps and executions.

There is a proverb that says ‘people in glass houses shouldn’t throw stones’. Canada is awash in human rights abuses and crimes, making dubious the posture of those casting stones against Russia:

The much-criticized and repressive ‘national security’ laws in Canada enacted by the previous Conservative Party government of Stephen Harper have been left largely untouched by the Liberal Party government of Justin Trudeau. There has been a similar continuity in foreign policy. Canada is intervening militarily in the very Ukraine that is the subject of the Kate Taylor column.

How many of the homes and communities in rebellious eastern Ukraine that have suffered shelling and other military attacks by Ukrainian armed forces during the past three years can trace their suffering to the training and equipment provided by Canada’s military mission? Now there would be a worthy subject for a Globe and Mail investigation, if only the newspapers anti-Russia blinders were lifted.

This article was first published at New Cold War.org, where Roger Annis is editor-in-chief. (As of Aug 1, 2017 and until further notice, New Cold War.org is in archive mode; announcement here.)

Notes:
[1] Most of Crimea’s electricity supply previously came from hydroelectric dams and nuclear stations in Ukraine. Because of Ukraine’s blockade, Crimea is now connected to the Russian electrical grid (including boosting its own electricity production). For more on Crimea and Canada, see my article of March 17, 2017, ‘What about Crimea?” is latest narrative by Canada’s foreign minister.

Postscripts:
1.  Media in Toronto (though not the Globe and Mail) are beginning to report the recent disappearances of two gay men in the city. The story was first reported on July 28 in a U.S. news outlet, VICE News Canada. Two days later, the Torontoist reports that a public meeting will take place in the city on August 1 where Toronto police will report on their investigations to date. There are concerns that the news cases could be related to the unresolved disappearances of three gay men between 2010-12.

In Sydney, Australia, police have been quietly investigating for the past four years the deaths of at least 88 men who police now suspect may have been murdered by hate gangs between 1976 and 2000. There were criminal convictions in a handful of the cases. About 30 of the cases remain unsolved. At the time, anti-gay and lesbian hatred by police meant that most of the suspected murders were not seriously investigated.

2.  Nearly 270 people have died in Canadian provincial jails over the past five years. Two-thirds of them were legally innocent, by Anna Mehler Paperny, Reuters, Aug 3, 2017