Arrests in Ukraine over the murder of journalist Oles Buzina

By Roger Annis, June 23, 2015. Also published on New Cold War.org, and on Counterpunch

Two suspects from the extreme-right in Ukraine have been arrested for the killing of Oles Buzina two months ago. The extreme-right is running rampant in the country but Western media is silent. 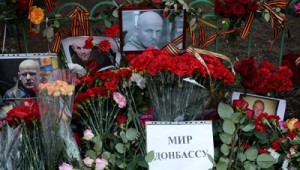 Two people were arrested in Ukraine on June 18 for the murder of journalist Oles Buzina on April 16, 2015. The two are said to be members of neo-Nazi paramilitary forces. Andriy Medevko and Denys Polischuk appeared in court separately on June 19. They were denied bail and ordered to appear again in court in August.

Polischuk was released on bail on June 23. He was greeted upon release by a crowd of Right Sector members. Bail of five 5 million hryvnia (US$230,000) was paid by Oleksiy Tamrazov, owner of the media conglomerate Media Group and one of the wealthiest gas/oil businessmen in Ukraine. (UNIAN News, June 23, 2015)

Both men are in their mid-20s. Korrespondent reported that a third suspect had been arrested. He was later released without charge. 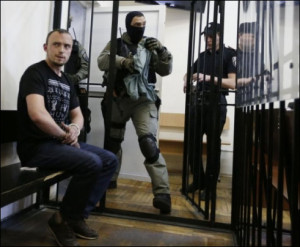 UNIAN News reports that Polischuk is a member of the UNSO Battalion. It is an arm of the Social National Assembly, a fascist party.

Oles Buzina was a Ukrainian writer and journalist who was outspoken against the overthrow of the elected President Viktor Yanukovych in February 2014. He went on to oppose the civil war course in eastern Ukraine of the right-wing government that replaced that of Yanukovych. He was gunned down in broad daylight in front of his home in Kyiv.

Stealing and pillaging by battalions

The arrests of Oles Buzina’s alleged killers occurred as an internal squabble erupted between officials of the Kyiv government and leaders of another right-wing battalion. On June 17, Ruslan Onishchenko and seven of his cohorts in the ‘Tornado Battalion’ were arrested by Ukrainian police at the request of Gennedy Moskal, the appointed ‘governor’ of the Ukraine-controlled territory of Lugansk region.

They are accused of smuggling for profit as well as lawless actions against civilians, including thefts, assaults, kidnappings and torture.

According to RT.com, Ruslan Onishchenko has been convicted five times of violent crimes. Before the latest squabble, he was presented by Kyiv officials as a hero of its ‘Anti-Terrorist Operation’ in eastern Ukraine.

The Ukrainian television program Podrobnosti (TV-channel Inter) aired a story on June 19 containing recorded conversations of Onishchenko with his cohorts. The story was headlined, ‘Without tortures, life would not be a life’.

“Some soldiers of the Tornado Battalion have contacted us,” reported the program. “They have given us a recording of the conversation of battalion commander Ruslan Onishchenko with one of his deputies who uses the call sign ‘Mujahideen’.

“This conversation is proof of the fact that the battalion is engaged in marauding and torture. We have checked the soldiers who gave us the tape recording via our sources, and they are listed as enrolled in the battalion.

“‘Without tortures, life would not be a life. Nothing raises your vitality as when you’re holding someone’s life,’ says the soldier with the call sign ‘Mujahideen’.”

“In an exclusive interview with Podrobnosti, the soldiers also told about the torture of people. Prisoners were kept in basements. They were beaten with sticks and sexually assaulted. In addition to performing combat tasks, soldiers were ordered by Ruslan Onishchenko to steal civilians’ vehicles and equipment.

“‘Most people who are found intoxicated or homeless were detained and forced to perform work for us–to build something, to weld something. Cars were simply taken by force from ordinary civilians. They were beaten with sticks– that’s all on the video, what was previously heard. They really raped one man, and Mujahideen recorded it all.

“‘We had ten prisoners. Onishchenko encouraged the taking of prisoners and gave the ‘green light’ to such actions. ‘These are your prisoners – do with them what you want’, he would say.'”

“‘He, too, would say that without torture, life is boring’, the fighters of the battalion told us.”

Sputnik News quotes Ukrainian Military Prosecutor Anatoly Matios as telling a television program that of 80 of the group’s members investigated, half were found to have criminal records. The news agency says that Interior Minister Arsen Avakov has moved to limit the public relations damage by ordering the dissolution of the battalion.

It’s been a bad several weeks for Ukraine’s battalions. On June 11, the U.S. Congress voted to ensure that no funding or military training or equipping would go to the so-called Azov Battalion because of its openly neo-Nazi identification.

But a dissolution of that outfit is certainly not in the cards. Its role has been vigorously endorsed by Ukrainian government officials and it happens to control the industrial and port city of Mariupol in the southeast of Ukraine.

On June 13, the group staged a military parade through the streets of Mariupol to mark one year of its control of the city. On hand to cheer the “national heros” were no less than Interior Minister Avakov and National Security and Defense Council Secretary Oleksandr Turchynov. Among those giving a speech to the ceremony with Turchynov and Avakov alongside was neo-Nazi leader Andriy Biletsky.

Another extreme-right party, the Right Sector, is keeping up its pressure on the Kyiv government not to relax the civil war they are jointly pursuing in the east.

Kid glove treatment of the extreme-right in Ukraine

Reports of torture and marauding by the extreme-right battalions in Ukraine are commonplace in the country. It is one of the reasons why opposition to the war is high, and growing. For example, a protest of more than one thousand people was staged on June 17 in the streets of Kyiv surrounding the U.S. embassy (video here). But barely a word of such news finds its way into the pages and broadcasts of Western media. A rigorous, de facto censorship prevails over anything that does not fit a ‘blame Russia’ narrative for describing the war in the east of the country.

Western editors, journalists and politicians politely call the far-right paramilitary battalions “volunteer” battalions and they parrot the line that Russia has a large, occupation troop presence in Ukraine.

Mainstream press is nearly universal in its description of the crisis in Ukraine as caused by “Russian aggression”, including a Russian “annexation” of Crimea in March 2014. For example, Canadian Press writer Murray Brewster writes in a syndicated article with a straight face on June 19, “Ukrainian President Petro Poroshenko has made it clear there will be no reforms [that is, measures responding to the grievances of the people of eastern Ukraine] as long as Russia keeps troops in his country.”

In Canada, there has been across-the-board political support for the war being waged by the Kyiv government and its allied battalions. Recently, news of the role of the extreme right in the war in Ukraine (news only to those feigning ignorance or whose heads have been in the sand during the past 14 months) was ever-so-briefly reported following the vote in the U.S. Congress on June 11 to deny funding to some of the extremist battalions.

The U.S. vote caught Canadian politicians with their pants down. The more faint-hearted or embarrassed among them reacted with variants of, ‘Gee, I didn’t know. Someone should do something about this.’

One tactic to lessen international attention on the extremist battalions and gain them access to Western military training and arming has been to integrate them into Ukraine’s National Guard. When Canada’s defense minister, Jason Kenney, was placed on the hot seat following the U.S. Congress vote, he smoothly replied that only units of the National Guard and the regular Ukraine army would receive training from the military mission that Canada is soon to land in Ukraine.

The prominence of the extreme-right in Ukraine pre-dates its role in the overthrow of the country’s elected president in February 2014. An article in the September 27, 2013 edition of the Russian-language Korrespondent happens to feature a photo of a younger Andriy Medevko. He is delivering a Nazi salute. The article examined the widely-reported phenomenon at the time of neo-Nazi football hooligans running amok in Ukraine.

News reports of neo-Nazi hooliganism in Ukraine (and Poland) was de rigeur in certain international press in 2012 and 2013 when the European press descended on Donetsk for the Euro-2012 football tournament. Here are some samples of media coverage in British newspapers in 2012:

But such reporting was “switched off” in 2013 as the Euromaidan protest movement arose and quickly gained favour in Western capitals. The NATO military alliance saw in Euromaidan an opening to press its historic anti-Russia drive, so NATO’s narrative of a “Russian invasion” of Ukraine soon became the only accepted story in Western media.

In Canada, the fundraising efforts of the far-right battalions have been featured and promoted in two of the country’s largest newspapers—the Globe and Mail and the Toronto Star. Elected members of Parliament of the three large parties in Ottawa as well as the premier of Canada’s largest province, Ontario, have happily joined in public forums and other events featuring spokespeople for the Right Sector and other extreme-right figures from Ukraine.

Western media has been all but silent over the killings and jailings of journalists occurring in Ukraine. The few who reported the murder of Oles Buzina invariably referred to him as “pro-Russian”, referring to his outspoken writing in opposition to the murderous civil war in the country.

Ukraine has become one of the most dangerous countries in the world for journalists to work. But don’t go looking for that story in the world’s mainstream press—you won’t find it. Nor will you find a hint of the political repression being meted out daily by the combination of the Ukraine government and right-wing street vigilantes.

Will those arrested for the murder of Oles Buzina face justice? Time will tell. The pro-Euromaidan purging of Ukraine’s state and judicial apparatus which was codified in a law adopted last September is not aimed at fixing the injustices and corruption endemic to Ukraine’s economy and its judiciary. As the Vox Ukraine project reported in December of last year:

Roger Annis is an editor of the website The New Cold War: Ukraine and beyond. On June 12, he gave a talk in Vancouver, Canada reporting on his visit to Donetsk, eastern Ukraine in April 2015 as part of a media tour group. A video broadcast of that talk is here: The NATO offensive in eastern Europe and the class and the national dynamics of the war in eastern Ukraine.

Case ongoing: Ukrainian editor arrested and jailed for advocating national dialogue and curbing of the power of oligarchs, by New Cold War.org, March 27, 2015