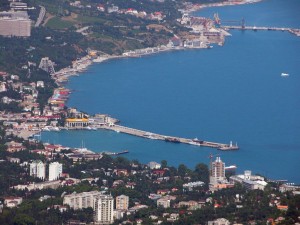 Yalta, Crimea—An antiwar, antifascist conference took place here on July 6 and 7, bringing together more that than 100 people from across Ukraine as well as from Russia, Belarus, Poland, four countries in western Europe, and North America. It featured two days of intense discussion and debate of the political and social calamity that has broken over Ukraine during the past six months. The conference set itself the challenge of building a broad, international solidarity movement with the people of Ukraine and made some positive steps in that direction.

The rightist government in Kyiv and its backers in the NATO military alliance and the economic austerity councils of the European Union have been waging all-out war against the people of eastern Ukraine. The latter are resisting Kyiv’s turn to Europe and harsh austerity. They want more control over their economic and political destiny and they want principles of social justice to prevail. Sadly, they are being met with extreme violence and repression.

The full force of the Kyiv government’s assaults are taking place in Southeast Ukraine, in the regions of Donetsk and Luhansk. The people there voted in May to declare autonomy from the central government. The conference heard harrowing tales of the bombings, shellings and ground assaults on some cities that have intensified since the autonomy plebiscites in May, particularly against Slavyansk in Donetsk region.

The conference also received reports of political conditions throughout Ukraine, where the right of political expression and association is under sharp attack by a combination of police and judicial repression and fascist vigilanteism. The Kyiv government draws heavily from fascist political movements and militias for support.

One delegate from Ukraine who traveled to Crimea by train told this writer of witnessing young men removed from the train by Ukraine border authorities under suspicion they were escaping to Crimea seeking to evade Ukraine’s compulsory military service. He also spoke fearfully of the political kidnappings and disappearances that are taking place in his region of Kharkiv, the second largest city in Ukraine.

Repression in Kharkiv began in March. As in Kyiv and other cities under the control of the Kyiv government, the political left has been driven underground or into exile. Tens of thousands of people from eastern Ukraine have taken refuge in Russia in the past several months, as have left wing activists and intellectuals from Kyiv and cities throughout the country. This tide risks growing in the months ahead.

The success of the conference in Yalta is reflected in the two declarations it approved, one in English and a longer one in Russian. They will be published in the coming days, including a translation into English of the Russian declaration. These express a commitment to building the broadest antiwar campaign possible to halt the war in eastern Ukraine. The Russian language declaration expresses a broad agreement among delegates for a socially progressive program for the future of Ukraine to replace the present right-wing and pro-austerity program. Since achieving a formal independence more than 20 years ago, Ukraine has been weakened and impoverished by a capitalist kleptocracy that came to replace the bureaucratic, state-direged economy. Many Ukrainians naively look to the European Union for an economic salvation, but the EU is offering nothing more than ‘open market’ dogma and regulations that would see much of existing industry and agriculture undermined and destroyed.

The conference met in the shadow of a looming attack by the Ukraine army and its allied rightist and fascist militias against the city of Donetsk, population 1.2 million. The city is the capital of the heavily industrialized Donetsk region and of the Donetsk People’s Republic that was declared in May. The city’s and region’s vulnerability has increased as a result of the strategic withdrawal several days ago from Slavyansk by Donetsk self-defense forces. They were overpowered by the larger, NATO supplied Ukraine forces. Mainstream news reports are openly pondering how many lives would be lost in hand-to-hand fighting in Donetsk if and when the Kyiv regime decides to attack its own citizens there.

Western European participants at the conference came from Britain, Sweden, Germany and Austria. There were three participants from Canada and one from the United States. The conference was organized by progressive institutes in Moscow and Ukraine, and it had the participation of many political and social organizations from Ukraine, including Donetsk and Luhansk regions.

You can follow news of the growing solidarity movement with Ukraine on these websites:
* The UK campaign Solidarity with the Antifascist Resistance in Ukraine
* The English language website page of the Ukrainian political association Borotba (‘Struggle’), (click on ‘English’)
* The English language website page of Liva (‘The Left’), (click on ‘Translations’)
* The multiple pages of Ukraine news and analysis on this writer’s website, ‘A Socialist in Canada’.