The online publication Links International Journal of Socialist Renewal, based in Sydney, Australia, has published a scurrilous article slamming the outcome of the Russian presidential election of March 18, 2018. The writer, Volodya Vagner, who lives in Sweden and travels to Russia, repeats all the anti-Russia themes one reads daily in Western media. 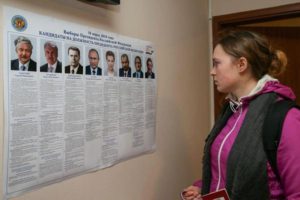 Voter looks over listing of candidates in March 18, 2018 presidential election in Russia

Western media dismisses the very deep support for Vladimir Putin by the Russian people, including for the Russian president’s foreign policy of standing up to U.S. and NATO diktat. In the case of the recent presidential election, they dismissed it using variants of the theme that victory by Putin was “inevitable” because there is no democracy in Russia, so why bother paying attention?

An unstated part of the Western script is that the Russian people must be sheep if they would vote so overwhelmingly for such a man as Putin. It’s a not so subtle message of anti-Slavic prejudice and racism.[1]

The Links writer provides his variant by calling Putin an “autocrat” and calling the election a “circus”. He writes, “As expected, the circus director won.”

The writer tells us that Russia is falling apart everywhere, with its “infrastructure decaying”, its “economy stagnating” and its economic elites hopelessly corrupt. That’s exactly the prognosis made by Western governments four years ago when they began their economic sanctions against Russia. And the outcome? Vladimir Putin won re-election earlier this month with a higher turnout than the 2012 election and 77 per cent of the vote! So much for the appeal of Western-style democracy to Russian voters.

The writer devotes lots of copy space in praise of Alexey Navalny. He is Western media’s favourite Russian critic of Vladimir Putin. 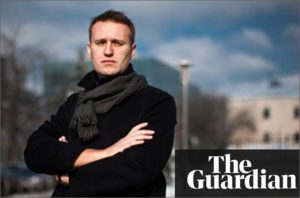 Called a “liberal” by Western media, Navalny served as an advisor to President Boris Yeltsin during the latter part of the cowboy-capitalist decade of the 1990s in Russia. He wants Russia to bend to the Western countries’ demands that it ‘behave itself’ and accept a subordinate status in the international order.

Reporting on a televised debate that took place in Russia in July 2017, Meduza writer Kevin Rothrock  reported, “Russia’s biggest enemy, [Navalny] said, isn’t the West, but the actions of its own political leadership.”

Navalny supports the sanctions which NATO and the West have levied against Russia beginning in 2014 when Russia recognized the referendum vote by the Crimean people in March 2016. The vote took place three and a half weeks following the violent, paramilitary coup in Ukraine which overthrew that country’s elected president. Crimeans voted overwhelmingly to secede from the new, extreme-right Ukraine and rejoin the Russian Federation.

Navalny also wants Russia to stop defending the people’s republics of Donetsk and Lugansk in the former eastern Ukraine. They are suffering ongoing military assault by Ukrainian right-wing paramilitaries and regular armed forces and an economic blockade ordered by Kyiv. NATO powers the U.S., UK and Canada are providing direct military assistance to Kiev’s ongoing civil war in the east.

Navalny turns reality on its head, blaming Russia for the conflict with NATO and Ukraine. In the televised debate last July, he told his debating opponent, “The war you started [in eastern Ukraine] is an expensive thing. It’s destroying Russia’s economy. Twenty million people are living below the poverty line, and you’re telling me that we should fund a war. Russia can’t afford to wage a war.”

In another article by the same Links writer, dated March 7, he voices the lie that Russia approved the military intervention by Turkey into the Kurdish region of Afrin in northwest Syria. The intervention began on January 20, 2018 and ended with an orderly retreat of Kurdish forces in mid-March. He writes, “That Russia indeed gave its active consent to Turkey’s offensive is beyond doubt.” So “beyond doubt” is the writer’s claim, in his mind’s eye, that like all the other Western reporters making the same claim, he did not feel obliged to provide the slightest evidence.

Coincidentally, on the same day which Links published its scurrilous article, Russian Foreign Minister Sergei Lavrov told a press conference in Moscow that Russia stands by its view that a comprehensive peace for Syria must include recognition of autonomous rights for the Kurdish people. The Kurdish news agency Rudaw reports:

Kurdish leaders have accused Moscow of giving Ankara the green light for its military operation in Afrin. In Manbij, military leaders are placing their hope in support from U.S. forces based in the city to shield them from a Turkish assault.

Lavrov, in a joint press conference with the UN’s special envoy for Syria Staffan de Mistura in Moscow on Thursday, reiterated Russian concerns that the Americans were “exploiting” their Kurdish allies in Syria. He called on all parties to work to restore peace and stability and stressed that the rights of Kurds must be preserved along with all groups in Syria…

For more than one year, Russia has sought to convince the Syrian government to modify its constitution in order to provide formal recognition and rights to Syria’s national minorities, especially for the Kurds. Western media—be it of the corporate or ‘left-wing’ variety—has censored from its pages any reporting of Russia’s stand.

Far from giving consent to the Turkish intervention into Afrin, Russia and Syria offered military assistance to Kurdish defense forces in Afrin to prevent a Turkish intervention in the first place. But the Kurdish leadership in Afrin apparently preferred losing the territory to Turkey over a political settlement with Syria and Russia.

The Links article closes with a paragraph straight out of the Western playbook for regime-change in Russia. It warns of “how fragile the Putinist system may actually be” and makes a hopeful projection for its fall before Vladimir Putin’s renewed presidential term ends in 2024. “If the opposition, be it in the form of Navalny or otherwise, succeeds in convincing the Russian people that systemic change is needed to address [economic concerns], Putin’s current term may even end sooner than 2024.”

The writer cites an example of the sort of social spark which may bring about the downfall of Russia’s government: “Thousands of angry residents have for several weeks been protesting municipal mismanagement of a landfill.” It’s happening in the town of Volokolamsk, one hour west of Moscow. But coincidentally, the notoriously anti-Russia Guardian daily in the UK gives us a different view in an on-the-spot report of the landfill protest. In an article on March 30, it says the town’s residents are looking to the Russian president to step in and resolve the dispute. “It may seem odd that a town can be so angry and yet support an incumbent president, but it is not uncommon for Putin to be seen as a potential ally against corrupt and inefficient local bureaucrats.”[2]

The projection of Russian liberals leading an overthrow of the Russian government is laughable considering the limited public support for pro-Western liberals such as Navalny. But it says a great deal about where blind, anti-Russia prejudice leads leftists. Sadly, prejudice and disorientation is widespread among the Western left when it comes to anything to do with Russia. This is not ‘socialist renewal’ but a socialist embarrassment and political dead end.

Notes:
[1] For a full treatment of this story, see Russophobia and the logic of imperialism, by Ava Lipatti, published by The Hampton Institute, June 8, 2017.

There were similar appeals to Putin in Kemerovo [Siberia], where a blaze in a shopping centre on March 25 Sunday left at least 64 dead, most of them children. Demonstrations followed, with locals hurling abuse at several local officials and a vice-governor falling to his knees to apologise to the crowd. Putin is seen as a potential arbiter in the case, despite appointing the governor, who has run the region as a personal fiefdom since 1997. A local “citizens action group” that met Putin had one major request: to take the investigation into the blaze under his personal control.

“The people want someone to be punished,” the official Kremlin transcript read. “It will be so,” Putin replied…