Canada’s toxic, corporate media is on an absolute tear against Russia and its president these days. The occasion is the confluence of the Russian presidential election of March 18, the increasingly bizarre performance of Canada’s closest ally–the Donald Trump presidential administration, and the need to shore up, somehow, the ongoing erosion of moral and political authority of the entire Western imperialist order. The latter is visibly in panic in Britain where the government is manufacturing bizarre tales of the Russian government ordering assassinations on British soil using highly dangerous chemicals. 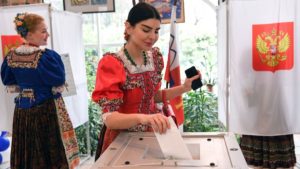 The Globe and Mail national daily published a feature article in its edition of Saturday, March 17 by its lead anti-Russia writer, Mark MacKinnon. The article continues the worst of the anti-Slavic and Cold War imagery that now dominates the reporting of Russia by the Globe and Mail in particular and Western media in general.

In this latest case, we read from MacKinnon that Vladimir Putin wants the Russian Federation to become a new Soviet Union. His lame article is headlined, ‘Back to the USSR: Putin and the new Cold War’. The sub-headline reads ominously: ‘Putin’s election victory is a sure thing. But he’s eyeing a much bigger prize.’

The article lead is featured on page one of the Globe along with a large image of the man himself, Vladimir Putin. The article is straight out of B-grade journalism, with the only thing missing being sinister-looking sunglasses adorning the image of the Russian president.

MacKinnon wrote a similarly lame piece for the Globe two days later, purporting to report on the Russian presidential election. He writes, “If you’re a Russian who believes your country should be a part of – rather than an opponent of – Europe and the West, Mr. Putin’s thumping win is meant to tell you that you’re in a tiny minority.”

The National Post manages to outdo the Globe in its own latest round of anti-Russia reporting in a feature article by Adrian Humphreys. It is headlined, ‘The devilish art of assassination: Why Russia eliminates its enemies with dramatic flair’. Humphreys is described by the Post as a “senior investigative reporter”.

The fever has also caught on at Maclean’s, the monthly, conservative news magazine, as Professor Paul Robinson at the University of Ottawa reports on his website Irrussianality on March 17. He titles his report ‘Three doses of drivel’ and writes, “Maclean’s is Canada’s equivalent of Time or Newsweek, that’s to say it’s a glossy magazine with lots of photographs mingled together with analysis of domestic and international events. In recent times, it’s been a reliable source of foaming-in-the mouth Russophobic commentary, but this week’s it’s outdone even itself by printing no fewer than three articles involving Russia, each one every bit as bad as the other.”

Canadians have been fed a constant barrage of anti-Russia propaganda in the leadup to the Russian presidential election by the Moscow correspondent of the state-run CBC. From Chris Brown, a reporter with no background and no expertise on Russia, we have been fed a constant stream of depictions of the election as rife with fraud, threats, intimidation and all other manner of crimes and wrongdoings. This in a country, Russia, that we are constantly told is falling apart. Unlike Canada’s closest ally, on the other side of the 49th parallel.

In a published article on March 17, Brown writes, “Putin’s guarantee of another term as president — made largely possible through a combination of opponent elimination and a Kremlin-friendly media landscape — is assured. If he stays the full six-year term, his reign atop Russia’s political pyramid will stretch to 24 years. Since the Russian Revolution a century ago, only Josef Stalin has ruled longer.”

CBC describes Chris Brown in these words: “Previously a National Reporter in Vancouver, Chris has a passion for great stories and has travelled all over Canada and the world to find them.” Great stories, indeed.

The CBC story teller laments in the same article, “Putin’s biggest adversary, anti-corruption crusader Alexei Navalny, was banned from running. So the only drama election night will be watching how many Russians get off the couch to cast ballots.”

Vladimir Putin won Russia’s presidential election with 77 per cent of the vote. Western media reporting was a thousand and one variants of ‘What do you expect? He’s a dictator’ or ‘We all know the outcome, so don’t even bother to pay attention.’ Putin’s astonishingly high approval rate is an embarrassment to his unpopular Western counterparts and the election circuses which they stage in which participation rates by voters have declined for decades.

Western media is deeply angry at the Russian population for the fact that pro-Western political figures such as Alexei Navalny just cannot seem to win gain much political support. The so-called ‘liberals’ wish to see Russia assume an obedient, subservient role in the world order, something akin to the good old days of cowboy capitalism in Russia during the 1990s. But damned if the liberals just cannot gain much support from the Russian population.

The epicentre of Western anger and revenge is the population of Crimea. The West still cannot believe that the estimated 2.3 million Crimeans had the audacity to defy Western diktat in 2014. They were told to put up and shut up with the violent, Western backed ‘Maidan’ coup in February 2014 that saw extreme-right paramilitaries overthrow Ukraine’s elected president. But less than one month after that coup, Crimeans voted in a referendum by a large majority to secede from the new, extreme-right Ukraine and rejoin the Russian Federation. How dare they!

Subsequent polls of Crimeans show high levels of satisfaction with the March 16, 2014 referendum decision, even among the approximately 24 per cent of the Crimean population that is of Ukrainian ethnicity.

Mark MacKinnon writes in his aforementioned election analysis, “The picture is even more dramatic if you consider that Mr. Putin’s nearest rivals were the Communist Party candidate and an ultranationalist firebrand, who respectively won 12 per cent and 6 per cent. Ninety-five per cent of Russians who voted cast their ballots for politicians who support confrontation with the West.”

MacKinnon inadvertently provides his readers with a glimmer of insight to Russian majority attitudes in the form of a quote from an important media figure in Russia: “We don’t want to live like you anymore,” Margarita Simonyan, the editor-in-chief of the Kremlin-run RT news channel, wrote on Monday [March 19], addressing the West in general via a series of Twitter posts. “For 50 years – secretly and clearly – we wanted to live like you, but we don’t anymore. We don’t respect you anymore.”

MacKinnon looks at the sad state of affairs among the Russian liberals themselves:

Adding to the feeling of defeat, Russia’s liberals are angrily divided over how to proceed from here. Ms. [Ksenia] Sobchak announced last week that she was teaming with Dmitry Gudkov – who was the only remaining Putin opponent in the country’s 450-seat parliament until he lost his seat last year – to start a new movement that they hope can resurrect liberal politics in the country by focusing first on the upcoming mayoral elections in Moscow and St. Petersburg.

But the new party looks doomed from the start without the participation of Russia’s most prominent opposition figure, anti-corruption campaigner Alexei Navalny, who acrimoniously fell out with Ms. Sobchak over her decision to run for president…

The 36 year old journalist-lite Sobchak won less than two per cent of the vote.

The Globe is championing the efforts of the extreme-right government in Ukraine to goad NATO countries into ever-harsher economic sanctions against Russia. The latest instalment of that effort is an article on March 20 urging Germany to cancel a planned twinning of the ‘Nord Stream’ natural gas pipeline delivering Russian natural gas to Germany under the Black Sea. Nord Stream 1 and the proposed Nord Stream 2 allow Russia to bypass overland gas pipeline transit across Ukraine or Baltic republics. Ukraine stands to lose substantial gas transit revenues as Russia reconfigures its gas shipments away from the territory of its extremely hostile neighbour.

Is there anything positive that ever happens in Russia, according to Canada’s corporate media and government? No there isn’t. Russia is just a big, dark hole, plunging ever further into the abyss, Canada’s corporate media shouts in unison. What better way than this to deflect the fact that Canada’s corporate and political leaders have led ‘their’ country to its own abyss. Canada is tied lock, stock and barrel to an unhinged presidential administration in the U.S. hell bent on more wars, more environmental destruction and more social and physical violence against its own population.

The U.S. administration does not even respect its fawning friends. Canada’s corporate leaders are frantically trying to convince the U.S. to exempt them from threatened protectionist economic measures. These are being brandished by Donald Trump and his ilk as a magic potion before a worried and unsettled U.S. population.

Postscript:
More zany anti-Russia reporting on page one of the Globe and Mail. In a page-one report in the Globe and Mail on March 23, the newspaper’s crack Russia reporter Mark MacKinnon resurrects the tale of Russian President Valdmir Putin ‘maybe’ being the richest man in the world. MacKinnon writes: “Mr. Putin’s financial declaration is wildly at odds with his status as the long-ruling leader of a regime frequently ranked as one of the most corrupt on the planet. Critics say Mr. Putin is a billionaire many times over – some believe he may be the richest person in the world.” The reporter’s sources for the claim are a couple of veteran, anti-Russia ideologues. But oops, MacKinnon then writes further on in the article: “While claims about Mr. Putin being a billionaire have never been proven, it is clear that members of his inner circle have gotten extremely rich during Mr. Putin’s 18-year reign over Russia.” This is mainstream, page one journalism in Canada in the year 2018, so driven by anti-Russia prejudice as to read like a comedy script.–Roger Annis