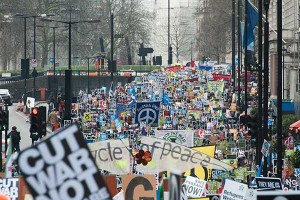 Thousands of protesters have assembled in central London for Britain’s biggest anti-nuclear weapons rally in a generation.

Campaigners gathered from across the world: some said they had travelled from Australia to protest against the renewal of Trident. Others had come from the west coast of Scotland, where Britain’s nuclear deterrent submarines are based.

As the huge column of people began moving from Marble Arch after 1pm, the mood was buoyant and spirited despite the cold.

Naomi Young, 34, from Southampton said: “You can’t use nuclear weapons. You would destroy the environment and kill hundreds of thousands of people. Why spend £100bn to buy a weapon unless you want to destroy the earth?”

Trident is a relic of a bygone age. Will you join us on Saturday to march against it?, statement by Caroline Lucas, Nicola Sturgeon and Leanne Wood (leaders of the Green Party, Scottish National Party and Plaid Cymru [Wales], resp), Feb 25, 2016

Many waved placards with phrases including “Books Not Bombs”, “Cut War Not Welfare” and “NHS [National Health Service] Not Trident”. 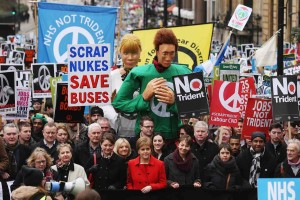 A common theme among protesters was the cost of renewing Trident during a period of austerity.

Andy Pomphrey, 67, from Hampshire, said: “It’s such an excessive amount of money for a weapons system when the NHS and junior doctors, are struggling.”

Kai Carrwright, 17, from Exeter said: “We are having to pay to go to university and yet they want to spend £100bn on something that can only lead to the destruction of life on Earth.”

The campaigners headed for Trafalgar Square where were addressed by the leaders of the SNP, Plaid Cymru and the Green Party. The true draw – cited as an inspiration by many of those assembled – was the leader of the Labour party, Jeremy Corbyn, whose unswerving unilateralist stance has electrified the nuclear deterrent debate in a manner few could have foreseen. 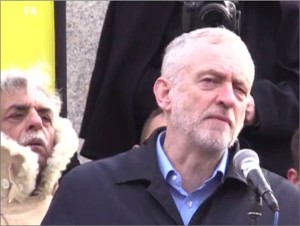 As crowds built from midday close to the assembly point at Marble Arch, it quickly became evident that the event would mark the biggest anti-nuclear demonstration since 1983, when 300,000 gathered in London’s Hyde Park to demonstrate against the deployment of Cruise missiles at Greenham Common, Berkshire. Union officials, faith leaders, anti-nuclear activists and anti-war campaigners were evident. Stewards estimated the numbers ran into “many tens of thousands”.

Organisers of the march, the Campaign for Nuclear Disarmament, were confident the turnout would send a robust message of growing support against renewing the nuclear weapons system – at an estimated cost of least £41bn – and argued that worries about job losses were a red herring.

Corbyn’s decision to address the rally later on Saturday has further exposed a faultline through the party, and he has been criticised by some for highlighting party splits on a key debate.

Entering the stage to rapturous applause, he said that no one should forget the “absolute mass destruction on both sides” that would follow a nuclear attack and reiterated his “total horror of nuclear weapons, should they ever be used by anybody”.

Corbyn said he was elected Labour leader on a manifesto in which standing against the renewal of Trident was a key component.

The treaty had worked, given that most countries that did not have nuclear weapons at that time had not subsequently acquired them, Corbyn told the crowd. It was a credit to countries such as Argentina, South Africa and Brazil that both Africa and South America remained free of such weapons, he added.

The US, Russia and the UK signed the treaty, pledging their cooperation in stemming the spread of nuclear technology.

Corbyn, who said he joined the Campaign for Nuclear Disarmament when he was 16, also made reference to those who questioned whether he should be attending the protest: “A lot of people said that maybe it was utterly relevant maybe you shouldn’t be there, but I want to be here because of my belief in a nuclear-free future.”

He said he chose to address the demonstration because he believed in a “different kind of politics in a different kind of world, a world that emphasises dealing with the crying needs of the poor and homeless in this country. Those that are going short and suffering public spending cuts.”

Earlier this week, union activists from the GMB attacked Corbyn over his stance on Trident, warning that tens of thousands of skilled jobs were dependent on parliamentary backing for renewal of the nuclear submarine programme.

He advocated re-investing some of the money allocated for Trident on keeping jobs in the affected areas.

The rally received support from a number of cultural figures including bands Young Fathers and Massive Attack. Fashion designer Katharine Hamnett recently unveiled a new Stop Trident T-shirt range while Portishead’s Geoff Barrow is currently mixing a single in support of the campaign.

The event also received significant international support with campaigners from Japan, the only country to have suffered an attack by an atomic bomb, urging Britain to work towards disarmament.

Gensuikyo, the Japan Council against A and H Bombs, joined similar organisations from France, Switzerland, Italy, New Zealand and the US in sending messages of support and solidarity to the CND, the organisers of Saturday’s demonstration.

The Successor programme to replace the four Vanguard nuclear armed submarines currently carrying Trident missiles is now priced at £31bn, with a further £10bn set aside for unforeseen risks.

A parliamentary vote on renewing Trident is expected later in the year.

Irish prime minister Enda Kenny on Saturday conceded defeat as early indications from the election showed support for both his Fine Gael party and its junior coalition partner had slumped in the face of anger over austerity.

“Clearly the government of Fine Gael and Labour are not going to be returned to office and obviously one has to wait now until all the counts are in right across the country to see what the options that must be considered are,” Kenny told RTE television.

Sinn Fein leader Gerry Adams said that the Irish general election has stirred a “seismic change” in Irish politics. “We’re into a new era. In this election we have seen a seismic change and realignment of politics here,” he told Irish newspaper An Phoblacht on Saturday as the country awaited final results.

“One thing is certain – this change will continue. It is only a matter of time before a progressive government is elected.”

Adam’s statement comes as anti-austerity Sinn Fein enjoyed its best campaign in decades, increasing its vote by at least 50 per cent and upsetting a long-standing bi-partisan system.

The ruling government coalition in Ireland appeared to suffer a significant defeat in the general election on Friday, with an exit poll indicating Prime Minister Enda Kenny’s coalition government had been kicked from office.

However, the election is unlikely to produce a clear winner, leading to speculation that historic rivals Fine Gael and Fianna Fáil would be forced to enter into a “grand coalition” despite both ruling out the possibility of forming government together. Many are fearing that another election will have to be held to build a new government.

Kenny’s Fine Gael are set to come out on top with 26 per cent of the vote, according to the exit poll from national broadcaster RTE. With partners Labour in line for 7.1 per cent of the ballot, the governing coalition will fall well short of the 41-42 per cent they identified as needed for re-election.

Fianna Fáil, the main opposition, appears to have taken 23 per cent of the vote.

The Irish Labour party looks to be on a verge of a wipeout, with leader and deputy prime minister Joan Burton facing a struggle to retain her seat.

Other Labour ministers including Alex White, Kathleen Lynch, Ged Nash and Kevin Humphreys are also in for a tense weekend, with counting expected to take days under Ireland’s complex voting system.

Fine Gael ministers Pascal Donohoe and James Reilly will also have a nervous wait to see if they will retain their seats in parliament.

Voters punished the Fine Gael-Labour coalition for tough austerity measures imposed on the country after Ireland took a sovereign bailout in 2010, a scenario similar to other European countries struggling through a debt crisis.

Exit polls also suggest that one-third of the electorate voted for independent candidates or smaller parties.

Ahead of the election, pundits suggested that in the event of such an outcome, Fine Gael would need to consider a coalition wih rival Fianna Fail.

Leaders from both parties balked at the suggestion before the vote, but one senior member from Fine Gael said he would “of course” be open to the prospect minutes after the exit poll was released.

“We have to have a government and every option will have to be looked at. The only option I would have a problem with is Sinn Fein,” Michael Ring told the Newstalk radio station

The left-wing Sinn Fein, led by Gerry Adams, won 16 percent of the vote according to exit polls. The leftist party has been a thorn in the side of its rivals with its steadfast opposition to austerity measures.

A Fine Gael-Fianna Fail coalition would also make Sinn Fein the main opposition party in the Irish parliament, a situation the other parties would rather avoid.

Leaders from the European Commission had previously cast Ireland as the poster child for austerity regimes.The huge drop in support for the Fine Gael-led coalition seemed to indicate that Kenny’s campaign to “keep the recovery going” fell flat among many yet to feel th effects of that recovery themselves.

“It looks like it will be a long time before a government will be formed because the current government can’t be returned on those figures,” O’Malley said, adding that the “disastrous” result for Fine Gael could put Kenny’s leadership under threat.

Forces on the left (are) now getting over a third of the vote. We’re into unknown territory, as it were, here,” said David Farrell, Professor of Politics at University College Dublin.

Counting votes in Ireland is a complicated task. Candidates need to achieve a set quota of votes, which varies on how many people live in the politician’s constituency. If the required number is not obtained the candidates with the least votes will then be excluded and see their votes redistributed to their higher-scoring rivals in an attempt to reach the set quota.

Early indications are that turnout was around 66 per cent of the electorate.