The following commentary by Toronto Star columnist Rick Salutin is the most perceptive commentary yet written on the current leadership contest of Canada’s New Democratic Party. Four candidates are vying for the party leadership. Voting by the party’s approximately 125,000 members is underway and the result will be announced on October 2. A winner must pass a 50 per cent-plus one threshhold, so a second and even third round of voting could take place. 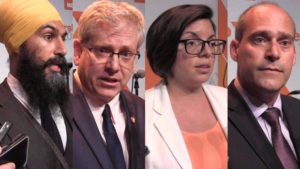 The NDP is the third largest party in the Canadian Parliament. Currently, it holds 44 seats out of 338. The party suffered a disastrous loss in the October 19, 2015 federal election after its leadership core decided to run a fiscally conservative, ‘balance the budget’ election campaign. In the campaign, the NDP was outflanked on the left by the Liberal Party.

Why is the NDP different from other parties?

The four candidates vying for the leadership of the national party provided feeble answers to that question.

In their final leadership debate, the four NDP candidates were asked what differentiated their party from Liberals. Good question. They had to be nimble, since it was the lightning round. The NDP is always up-to-date with last year’s, or last decade’s, fad.

At any point in the 50 years after its founding in 1932 (as the Cooperative Commonwealth Federation, or CCF: which contained the answer in its name, unlike ‘New Democratic Party’), that question would’ve been easily answered. “Unlike Liberals, we are democratic socialists, we’ll demolish or at least tame the scourge of capitalism” — a view grown mildly resonant again, after 2008.

The responses were feeble. The difference is following through (Charlie Angus); we mean what we say and say what we mean (Guy Caron); we seek power to enact our principles, Liberals just want power (Jagmeet Singh); principles (Niki Ashton), but then she was cut off. It was the lightning round.

In other words, we’re morally superior. In other other words: the NDP has become another identity in the carnival of identity politics. You are what you are, then you seek reasons to be proud of that. Sometimes it works and sometimes, not so much. In the case at hand: we’re better people than Liberals because we have principles we stick to. Got that, voters?

The problem is, it’s manifestly false. Two examples: in 2004, under Jack Layton, the NDP voted to kill a transformative national child-care program, which the Liberal government had enacted, but which died as a result, giving us nine years of Harper conservatism. [See note below.] The NDP has never apologized for that, which would at least show they remember what their principles once were.

Then in 2015, NDP leader Thomas Mulcair promised to run no deficits if elected, after the Liberals promised to do so, effectively swapping principles. Self-congrats are less in order here than self-criticism, if not self-loathing.

The four NDP leadership candidates are making their final case to party voters before balloting begins on Monday. National caucus chair Daniel Blaikie says the NDP will advocate for the same issues regardless of who becomes leader.

But this is what happens when you lose touch with your raison d’être. You start flailing around for purposes and, inevitably, gimmicks. It began after Ed Broadbent’s resignation in 1988. He’d been a luminal figure between founders like Tommy Douglas and the current flailers. Suddenly you heard NDPers saying things like, “It’s time for a woman.” They never said that before; it was always time for socialism. The two women leaders they tried didn’t work out.

Then came Jack. At the convention that chose him, venerable NDPers said embarrassing, dated (if faddish) things like: Jack thinks outside the box. As if that had anything to do with anything or, for that matter, were true.

Of the current crop, Jagmeet Singh is clearly the gimmickiest, their latest quick ticket to power: GQ spread, martial arts, colourful headgear. It’s not that he has no ideas. He’s actually the most Liberal on the roster, as Niki is the most CCFish. He’s even in favour of means testing, which he calls income testing, for pension support and other areas. I mean, if you’re gonna means test pensions, why not health care: if you can afford it, you pay for it — then presto, no more cross-class support for public health care, and you’re back in the 19th century.

It’s a way of breaking down vs. building up social solidarity, by separating the benevolent haves from the needy, petitioning underclasses. In fact, it puts Singh close to Tories, such as Brian Mulroney, who tried killing off universality in the 1980s but reneged after massive allergic reactions.

Singh’s lawyerly stress on individual rights is strongly Liberal too; if anything’s distinguished the NDP, it’s been backing collective rights, such as medicare, unions etc. With Singh, it’s really a question not of what differentiates the NDP, but: Why aren’t you a Liberal? Maybe he wound up at the wrong meeting, the night he decided to get involved.

The irony is that it’s Liberals who’ve seized on left populism as the obvious way to go. Justin Trudeau’s the one saying, regarding his tax reforms, “The current system favours the wealthy.” I assume he’s enjoying the attacks from rich doctors and lawyers while donning the populist garb long cultivated by Harper Tories. It’s tricky, since Liberals also adore free trade deals, a wholly owned corporate initiative. That leaves them vulnerable, though they’re more ambivalent than malevolent.

But aren’t these words that the NDP — who don’t support the tax reforms — should be saying, rather than Love and Courage, Singh’s Obama-esque slogan?

Rick Salutin’s column appears every Friday in the Toronto Star.

Note: The claim in this article by Rick Salutin that the NDP does not support a national daycare program is false. It forms a part of the party’s official program. The claim stems from a different matter which Salutin confusingly mixes in.

The claim stems from the NDP’s decision in November 2005 (not “2004”) to vote in favour of a straight non-confidence motion by the Conservative Party led by Stephen Harper against the then-minority Liberal Party government under Prime Minister Paul Martin. The vote passed and Harper’s Conservatives won a minority government in the election that resulted, on January 23, 2016. At the time, the Liberals had a plank in their party platform in favour of a national daycare program. Salutin wanted the Liberal-NDP governing alliance to continue and he was sharply critical of the NDP vote in favour of the con-confidence motion. Since that time, Salutin has been an advocate of ‘lesser evil’ Liberal-NDP electoral alliances in order to block the election of the Conservative Party. This view is common to many of Canada’s trade union leaders and to left-liberal political opinion in general.

The Liberals have been in power for nearly two years and there is no sign of a national daycare program. Then as now, campaigns of mass, public pressure in the streets and workplaces are needed in order to win substantive social improvements. This is also true for winning peace (against war and militarism) and to meet the challenge of the global warming emergency. First Nations people in Canada have been leading the way in this regard in their fight for redress of historic injustices.

Notably absent from Rick Salutin’s critique of the NDP is that the party has failed miserably to oppose the war course that the Canadian government is embarked upon. The Liberal government plans to spend tens of billions of dollars in the coming years to bolster Canada’s air force and navy. It is also a key  member of the NATO military alliance’s war course against Russia. To wit, on September 22, Prime Minister Justin Trudeau announced the lifting of restrictions on weapons sales to Ukraine. Trudeau also said Canada will not participate in a talked-about UN ‘peacekeeping’ mission to Donbass (eastern Ukraine). Russia says such a mission should enforce the Minsk-2 ceasefire agreement that Ukraine has violated ever since its signing in February 2015; the Ukraine  regime and its Western backers want a UN force that can intervene militarily at will in the self-governed region of Donbass (Donetsk and Lugansk).

Canada was a participant in the near-genocidal war against the people of Korea from 1950-53. That war continues to be honoured in official Canadian military history. Canada is fully joined to Donald Trump’s bellicose sanctions and threats of new war.

[Québec solidaire is the left-wing electoral party in Quebec. It holds three seats in the Quebec National Assembly. It does not participate in Canadian federal elections. The interview by the National Observer as well as the answers by Gabriel Nadeau-Dubois are long on style, short on substance. There is no mention of a world calamitously descending into war, militarism and a global warming emergency. On the question put to Nadeau-Dubois of what he envisions for solidarity and cooperation between the working class in Quebec and in English-speaking Canada, he replies, “That’s not for me to answer…” Nadeau-Dubois and his party advocate Quebec independence. He describes independence as a plan for “emancipation and freedom” for all people in Quebec, including First Nations.–Roger Annis]

*  Articles by Roger Annis on the October 19, 2015 federal election in Canada and its aftermath:

View all of Roger Annis’ articles on politics in Canada at the ‘Canada-politics and social issues‘ section of A Socialist In Canada website.