Arriving behind the anti-Trump “resistance” and the Russia-gate “scandal” is a troubling readiness to silence dissent in the U.S., shutting down information that challenges Official Narratives, writes Robert Parry. 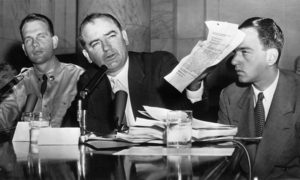 A stark difference between today’s Washington and when I was here as a young Associated Press correspondent in the late 1970s and the early 1980s is that then – even as the old Cold War was heating up around the election of Ronald Reagan – there were prominent mainstream journalists who looked askance at the excessive demonization of the Soviet Union and doubted wild claims about the dire threats to U.S. national security from Nicaragua and Grenada.

Perhaps the Vietnam War was still fresh enough in people’s minds that senior editors and national reporters understood the dangers of mindless groupthink inside Official Washington, as well as the importance of healthy skepticism toward official pronouncements from the U.S. intelligence community.

Today, however, I cannot think of a single prominent figure in the mainstream news media who questions any claim – no matter how unlikely or absurd – that vilifies Russian President Vladimir Putin and his country. It is all Russia-bashing, all the time.

And behind this disturbing anti-Russian uniformity are increasing assaults against independent and dissident journalists and news outlets outside the mainstream. We’re not just entering a New Cold War and a New McCarthyism; we’re also getting a heavy dose of old-style Orwellianism.

Sometimes you see this in individual acts like HuffingtonPost taking down a well-reported story by journalist Joe Lauria because he dared to point out that Democratic money financed the two initial elements of what’s now known as Russia-gate: the forensic examination of computers at the Democratic National Committee and the opposition research on Donald Trump conducted by ex-British spy Christopher Steele.

HuffingtonPost never contacted Lauria before or after its decision to retract the story, despite a request from him for the reasons why. HuffPost editors told a BuzzFeed reporter that they were responding to reader complaints that the article was filled with factual errors but none have ever been spelled out, leaving little doubt that Lauria’s real “error” was in defying the Russia-gate groupthink of the anti-Trump Resistance. [A version of Lauria’s story appeared at Consortiumnews.com before Lauria posted it at HuffPost. If you want to sign a petition calling on HuffPost to restore Lauria’s article, click here.]

Other times, the expanding American censorship is driven by U.S. government agencies, such as the Justice Department’s demand that the Russian news outlet, RT, register under the restrictive Foreign Agent Registration Act, which requires such prompt, frequent and detailed disclosures of supposed “propaganda” that it could make it impossible for RT to continue to function in the United States. 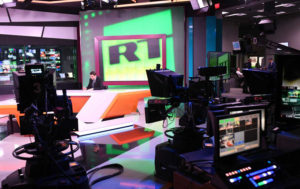 This attack on RT was rationalized by the Jan. 6 “Intelligence Community Assessment” that was, in reality, prepared by a handful of “hand-picked” analysts from the CIA, FBI and National Security Agency. Their report included a seven-page addendum from 2012 accusing RT of spreading Russian propaganda – and apparently this Jan. 6 report must now be accepted as gospel truth, no questions permitted.

However, if any real journalist actually read the Jan. 6, 2017 report, he or she would have discovered that RT’s sinister assault on American democracy included such offenses as holding a debate among third-party candidates who were excluded from the Republican-Democratic debates in 2012. Yes, allowing Libertarians and Greens to express their points of view is a grave danger to American democracy.

Other RT “propaganda” included reporting on the Occupy Wall Street protests and examining the environmental dangers from “fracking,” issues that also have been widely covered by the domestic American media. Apparently, whenever RT covers a newsworthy event – even if others have too – that constitutes “propaganda,” which must be throttled to protect the American people from the danger of seeing it.

If you bother to study the Jan. 6 report’s addendum, it is hard not to conclude that these “hand-picked” analysts were either stark-raving mad or madly anti-Russian. Yet, this “Intelligence Community Assessment” is now beyond questioning unless you want to be labeled a “Kremlin stooge” or “Putin’s useful idiot.” [An earlier State Department attack on RT was equally ridiculous or demonstrably false.]

And, by the way, it was President Obama’s Director of National Intelligence James Clapper who testified under oath that the analysts from the three agencies were “hand-picked”. That means that they were analysts personally selected by Obama’s intelligence chiefs from three agencies – not “all 17” as the American public was told over and over again – and thus were not even a full representation of analysts from those three agencies. Yet, this subset of a subset is routinely described as “the U.S. intelligence community,” even after major news outlets finally had to retract their “all 17” canard.

So, the myth of the intelligence community’s consensus lives on. For instance, in an upbeat article on Tuesday about the U.S. government’s coercing RT into registering as a foreign agent, Washington Post reporters Devlin Barrett and David Filipov wrote, “U.S. intelligence agencies have concluded that the network and website push relentlessly anti-American propaganda at the behest of the Russian government.”

In the old days, even during the old Cold War and President Reagan’s ranting about “the Evil Empire,” some of us would have actually examined the Jan. 6 report’s case against RT and noted the absurdity of these claims about “relentlessly anti-American propaganda.” Whether you want to hear the views of the Greens and Libertarians or not – or whether you like “fracking” and hate Occupy Wall Street – the opportunity to hear this information doesn’t constitute “relentlessly anti-American propaganda.”

The U.S. government’s real beef with RT seems to be that it allows on air some Americans who have been blacklisted from the mainstream media – including highly credentialed former U.S. intelligence analysts and well-informed American journalists – because they have challenged various Official Narratives.

In other words, Americans are not supposed to hear the other side of the story on important international conflicts, such as the proxy war in Syria or the civil war in Ukraine or Israel’s mistreatment of Palestinians. Only the State Department’s versions of those events are permitted even when those versions are themselves propagandistic if not outright false.

For example, you’re not supposed to hear about the huge holes in the Syria-sarin cases, nor about Ukraine’s post-coup regime arming neo-Nazis to kill ethnic-Russian Ukrainians, nor about Israel’s evolution into an apartheid state. All right-thinking Americans are to get only a steady diet of how righteous the U.S. government and its allies always are. Anything else is “propaganda.”

Also off limits is any thoughtful critique of that Jan. 6 report – or apparently even Clapper’s characterization of it as a product of “hand-picked” analysts from only three agencies. You’re not supposed to ask why other U.S. intelligence agencies with deep knowledge about Russia were excluded and why even other analysts from the three involved agencies were shut out.

No, you must always think of the Jan. 6 report as the “consensus” assessment from the entire “U.S. intelligence community.” And you must accept it as flat fact – as it now is treated by The New York Times, The Washington Post, CNN and other mainstream news outlets. You shouldn’t even notice that the Jan. 6 report itself doesn’t claim that Russian election meddling was a fact. The report explains, that “Judgments are not intended to imply that we have proof that shows something to be a fact.”

But even quoting from the Jan. 6 report might make an American reporter some kind of traitorous “Russian mole” whose journalism must be purged from “responsible” media and who should be forced to wear the journalistic equivalent of a yellow star.

Of course, much of this anti-Russian hysteria comes from the year-long fury about the shocking election of Donald Trump. From the first moments of stunned disbelief over Hillary Clinton’s defeat, the narrative was put in motion to blame Trump’s victory not on Clinton and her wretched campaign but on Russia. That also was viewed as a possible way of reversing the election’s outcome and removing Trump from office.

The major U.S. news media quite openly moved to the forefront of the Resistance. The Washington Post adopted the melodramatic and hypocritical slogan, ‘Democracy Dies in Darkness’, as it unleashed its journalists to trumpet the narrative of some disloyal Americans spreading Russian propaganda. Darkness presumably was a fine place to stick people who questioned the Resistance’s Russia-gate narrative.

An early shot in this war against dissenting information was fired last Thanksgiving Day when the Post published a front-page article citing an anonymous group called PropOrNot smearing 200 Internet news sites for allegedly disseminating Russian propaganda. The list included some of the most important sources of independent journalism, including Consortiumnews.com, apparently for the crime of questioning some of the State Department’s narratives on international conflicts, particularly Syria and Ukraine.

Then, with the anti-Russia hysteria building and the censorship ball rolling, Congress last December approved $160 million for think tanks and other non-governmental organizations to combat Russian propaganda. Soon, reports and studies were flying off the shelves detecting a Russian behind every article, tweet and posting that didn’t toe the State Department’s line.

The New York Times and other leading news organizations have even cheered plans for Google, Facebook and other technology companies to deploy algorithms that can hunt down, marginalize or eliminate information that establishment media deems “fake” or “propaganda.” Already Google has put together a First Draft coalition, consisting of mainstream media and establishment-approved Web sites to decide what information makes the cut and what doesn’t.

Among these arbiters of truth is the fact-check organization PolitiFact, which judged the falsehood about “all 17 intelligence agencies” signing off on the Russian “hacking” claim to be “true.” Even though the claim was never true and is now clearly established as false, PolitiFact continues to assert that this lie is the truth, apparently filled with the hubris that comes with its power over determining what is true and what is false.

But what is perhaps most troubling to me about these developments is the silence of many civil liberties advocates, liberal politicians and defenders of press freedom who might have been counted on in earlier days to object to this censorship and blackballing.

It appears that the ends of taking down Donald Trump and demonizing Vladimir Putin justify whatever means, no matter the existential danger of nuclear war with Russia or the McCarthyistic (even Orwellian) threats to freedom of speech, press and thought.

Investigative reporter Robert Parry publishes the essential Consortium News, where he is also a lead writer. He broke many of the Iran-Contra stories for The Associated Press and Newsweek in the 1980s. You can buy his latest book, America’s Stolen Narrative, either in print here or as an e-book (from Amazon and barnesandnoble.com).

‘Worryingly, not one major U.S. media outlet has protested the DOJ’s decision to compel RT to register as a foreign agent. Some, shamefully, have even endorsed it.’