Sept 19, 2013–This article is a compilation of two articles I wrote and published on my website following the Sept 11, 2013 derailment of a CP Rail oil train in the center of Calgary, Alberta. This version contains additional information.–RA 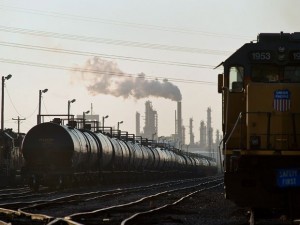 For the second time in three months, a CP Rail train carrying toxic and flammable hydrocarbons has derailed in the city of Calgary. On September 11, eight railway wagons carrying close to one million liters of a highly flammable gasoline product (diluent) used in the pipeline transport of tar sands bitumen derailed in the Inglewood neighbourhood.

The train was traveling at a slow speed while exiting CP Rail’s Alyth yard located near the center of the city. Brian McAsey, assistant deputy fire chief of Calgary, told the Calgary Herald, “(The product) is extremely flammable and very volatile.” The derailment also ruptured a natural gas line. Apparently, none of the product spilled from the rail wagons.

Seventy five residents of Inglewood staged a protest action two days later at the yard. They chanted “CP Rail, CP Fail”, expressing their anger and frustration with the failure of the company to address concerns stemming from its growing transport of oil-by-train and expansion of noisy and polluting diesel locomotive repair work at the Alyth yard.

Lara Murphy, one of the organizers of the action, told CBC News, “We don’t want another Lac Mégantic to happen.” She echoed the views of Calgary Mayor Naheed Nenshi who has criticized the rail transport setup in Canada which presently has municipalities responsible for emergency response and cleanup but which makes it very difficult for them to know what, exactly, is rolling through its jurisdiction on rail.

Murphy told the online Calgary Beacon, “Our biggest concern is with the ramped up transportation of oil and gas by the rail industry as a whole”.

“If we’re gonna transport this oil, I feel and the group feels we need more transparency from the rail companies.”

She is part of the Inglewood Community Association that has been fighting CP Rail ever since it began to expand the traffic and locomotive repair work at Alyth in 2009. That brought formal noise complaints from the community. Last month, a victory was scored when the Canadian Transportation Agency (CTA) ordered the railway to shift its locomotive work to a different location within the yard and to curb some of its overnight work. (For more detail on the noise problems, see page 6 of this Inglewood community bulletin from March 2011).

On June 27, six wagons on a CP Rail train carrying similar product jumped the tracks while crossing the Bow River on the 100-year old Bonnybrook Bridge. Reportedly, the weight of the cars caused the structural support of the bridge to give way.

That accident happened at the height of catastrophic flooding of Calgary and southern Alberta that month. The rushing water of the Bow River, which passes through the center of the city, might have weakened the bridge’s structure, but this was never officially determined.

Oil by rail in large volumes is a new phenomenon in Canada and the United States, beginning only some three years ago. It is expanding rapidly and among the many safety concerns it raises are questions about the ability of old and deteriorating rail lines and bridges to handle the exceptional weight of these trains. This may be a common denominator of the two accidents in Calgary.

A preliminary report by Transport Canada issued on Sept 12 says Quebec portions of the rail track of the Montreal, Maine and Atlantic Railway are in “defective” and “substandard” condition and do not meet safety standards. One section of the line was closed by inspectors following their investigations.

The MM&A line connects Farnham, Quebec, just south of Montreal, through Lac Mégantic to northern Maine. The line has been severed by the disaster and it is not know when and if the destroyed track will be replaced. Post-disaster sensitivity as well as the heavy contamination of the soil where the disaster occurred will require that a replacement be built on a new right of way around the town.[1]

CP Rail and Irving Oil contracted with the MM&A in 2012 to join in transporting crude oil from North Dakota to Irving’s refinery, Canada’s largest, in Saint John, New Brunswick, on the Atlantic coast. CP brought the oil trains as far as Farnham; the MM&A moved them as far as northern Maine; the Irving-owned NB Southern Railway then completed the journey.

Irving Oil, part of the secretive Irving family conglomerate, has switched app. 25 per cent of its refinery supply away from overseas sources to North Dakota. The shift is prompted by changes in the prices of crude oil that have made North Dakota oil cheaper than overseas oil.

Several days earlier, the Transportation Safety Board (TSB) of Canada issued a statement on one aspect of its ongoing investigation into the Lac Mégantic, Quebec. The federal agency says the identification and labeling of the oil carried on the fateful train through the town was false.

Investigators were puzzled from the get-go by the extreme volatility of the product on the train. It exploded in a giant fireball near midnight on July 6 in the center of the town when most of the 72-wagon train derailed. Forty seven people died and the surrounding ground and waters have been heavily polluted.

As reported in the Globe and Mail, the TSB has cited the North Dakota shipper, an affiliate of Miami-based World Fuel Services Corp., and the purchaser of the oil, Irving Oil, for failing to ensure the oil was properly classified and identified, including on the classification notice that must be attached to each wagon. The report does not mention CP Rail’s responsibility.

It turns out that the oil, which originated in the Bakken oil field in North Dakota (now the second largest reserve of oil in the U.S. thanks to new, fracking technologies), is light and highly flammable. It should have been labeled a ‘class two’ hydrocarbon instead of the ‘class three’ designation it carried. ‘Class two’ means more volatile and dangerous.

The change in designation might not have changed the outcome because there are no additional regulations that it triggers. But it might have prompted additional care in securing the train, which was stationed overnight and by all evidence was inadequately braked. It lost its braking and rolled driverless into Lac Mégantic. Regardless, it’s another example of the lax rail safety regulations in the U.S. and Canada that the disaster has brought to light. Rail carriers and their customers operate with too little public and regulatory scrutiny.

Since the July 6 disaster, the Irving conglomerate has found other routes to continue receiving North Dakota crude, including along the CN main line that connects Montreal to Halifax, Nova Scotia. CP Rail and CN Rail are the two branches of Canada’s railway duopoly. Each also has extensive track in the United States.

A report in the Sept 14 Portland Press Herald says that North Dakota crude shipments to Saint John through New England via another shortline railway similar to the MM&A–Pan Am Railway–have rolled to a halt. That decision is being welcomed by opponents of oil by rail in Maine, including the groups 350 Maine and Maine Earth First! that have been protesting and attempting to block the shipments.

Railway safety aside, the principle concern that the tragedy in Lac Mégantic has highlighted is the crazed and reckless path of unbridled extraction and burning of fossil fuels down which the economic elites of the world are dragging humanity.

To wit, the Canadian government is ramping up efforts on behalf of the oil industry to find outlets for Alberta tar sands oil. Frustrated by the campaign in the U.S. that has so far given pause to President Obama in approving the Keystone XL Pipeline, the government is lobbying heavily in the U.S. for the virtues of tar sands oil, saying its pollution footprint is less than coal and that Canadian oil has a better “human rights” imprint than foreign oil.

The government is also flooding the province of British Columbia with its cabinet ministers and messaging in efforts to weaken an environmental movement there that has so far blocked or slowed two proposed tar sands bitumen pipelines to the Pacific coast of Canada—Enbridge company’s Northern Gateway and the proposed expansion of the existing, Kinder Morgan company’s Trans Mountain Pipeline. The government is paying particular attention to wooing all-important support from First Nations peoples, including with money and promises of jobs.

The Pacific coast of BC is also getting hammered with expansion of coal exports fed by rail from western Canada and the U.S. and with a vast plan to expand natural gas fracking in the BC northeast and ship it to the coast by pipeline for liquefaction and export.

The tar sands pipeline blockage to the south and west has prompted a proposed, $12 billion ‘Energy East’ pipeline project that would carry tar sands bitumen from Alberta to Montreal and then on to the Atlantic coast at New Brunswick and Maine in two proposed branches. Opposition to that project is beginning to build.

Roger Annis is a member of the newly-formed Vancouver Ecosocialist Group. He blogs on environmental and other issues at A Socialist in Canada.

Notes:
[1] My August 30 article, ‘Climate change and social change: Lessons from the oil train disaster at Lac Mégantic, Quebec’, published in Counterpunch on August 30, examines in detail the political and economic issues involved in any plan to reconnect the severed MM&A line at Lac Mégantic.