June 9, 2012–Tens of thousands of people are in the streets of Montreal this evening in a chaotic scene that hundreds, probably thousands, of police are trying to control.

Many people are there to take in the festivities related to tomorrow’s running of the annual Formula One auto race. But thousands are there to protest. They are in solidarity with the post-secondary student strike, and they are opposing the police state Bill 78 adopted by Quebec’ National Assembly on May 18. They are angered at the decision yesterday by a Quebec judge to detain Yalda Machouf-Khadir and three other arrested colleagues in prison over the weekend.

Many people also mobilized today to express their anger and disgust at the decadence represented by the race itself. These include women who staged a march against the trade in womens’ bodies that they say accompanies the Formula One race each year. They tried to take their case to the Sheraton Montreal Hotel, which they say is the preferred hotel for what protesters call the “international jerk-offs” that frequent the race, that is, the men who purchase sex. The women were blocked and broken up by Montreal police. 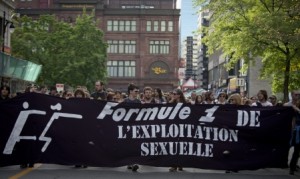 Another group of about 100 protesters against the F1 took to their bicycles during the afternoon…with no clothes on. One woman wrote on her bare back (translation from the French), “The F1 makes me sick. Stick it up your a**.”

The image of the race took a dive two days ago when former Formula One driver, hometown boy and success story Jacques Villeneuve thumbed his nose at the student strike and told students to go back to class.

According to Radio Canada, there were 27 arrests by police, of whom 16 face criminal charges. Several witnesses told the broadcaster of police violence that they witnessed.

Stay tuned to this web page for further news tomorrow, including a report on tomorrow’s mass protest planned at the entrance to the racing spectacle and the discussions among student activists and leaders that have taken place this weekend.

In the meantime, we leave you below with this powerful piece of art that has come forward in the midst of all the chaos and controversy. It depicts, on the one side, a typical party of the wealthy bon vivants, champagne glasses in hand, for whom the Formula One race is a highlight of their social calendar, and on the other side a mass movement fighting for a different world, including an independent Quebec.

“When bandits are in power, the place for an honest person is in jail.”–The iconic, since departed, Quebec trade union leader Michel Chartrand. 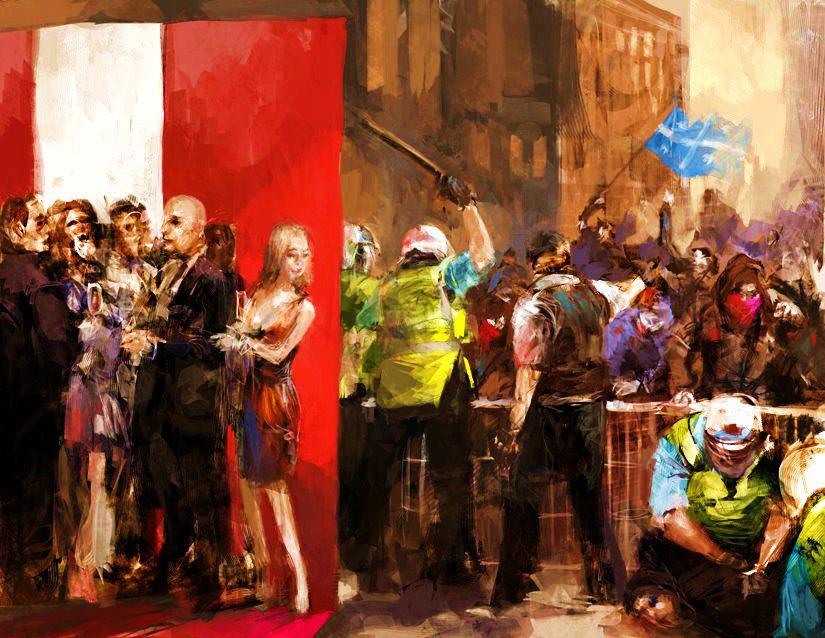