A history of the Unite Union of New Zealand 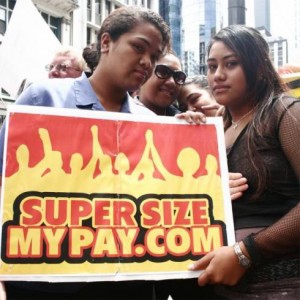 A history of the Unite Union of New Zealand was prepared by this author as part of the contribution by Unite to the international fast food workers’ meeting that took place in New York City in early May 2014. (See a report on that important meeting here.) Union officials and workers at that meeting were fascinated by the story we were able to tell.

In many ways, the history of the Unite Union is a prequel to the international campaign being waged today by workers in the fast food and service industries to organize unions, raise the minimum wage and otherwise improve their conditions of life.

Below are introductory paragraphs of the history that is published in the form of a 25-page pamphlet. You can read or download the pamphlet here.

In the late 1980s and early 1990s, workers in New Zealand suffered a massive setback in their levels of union and social organisation and their living standards. A neo-liberal, Labour Government elected in 1984 began the assault and it was continued and deepened by a National Party government elected in 1990.

The “free trade”policies adopted by both Labour and the National Party led to massive factory closures. The entire car industry was eliminated and textile industries were closed. Other industries with traditionally strong union organisation such as the meat industry were restructured and thousands lost their jobs. Official unemployment reached 11.2% in the early 1990s. It was higher in real terms. Official unemployment for Maoris (who make up 14% of the population) was 30%, again higher in real terms. Working class communities were devastated.

The National Party government presided over a deep and long recession from 1990-1995 that was in part induced by its savage cuts to welfare spending and benefits. They also introduced a vicious anti-union law. When the Employment Contracts Act was made law on May Day 1990, every single worker covered by a collective agreement was put onto an individual employment agreement identical to the terms of their previous collective. In order for the union to continue to negotiate on your behalf, you had to sign an individual authorisation. It was very difficult for some unions to manage that. Many were eliminated overnight. Voluntary unionism was introduced and closed shops were outlawed. All of the legal wage protections which stipulated breaks, overtime rates, Sunday rates and so on, went. Minimum legal conditions were now very limited – three weeks holiday and five days sick leave was about the lot. Everything else had to be negotiated again. It was a stunning assault on working people. Union bargaining, where it continued, was mostly concessionary bargaining for the next decade.

The central leadership of the Council of Trade Unions (CTU) capitulated completely to these changes and refused to organise broader industrial struggle, let alone a general strike, despite the fact that there was overwhelming sentiment for such a struggle. The impact of the recession and the new law was intensified by the demoralising effect of this failure to resist. Union membership collapsed within a few years from over 50% of workers to around 20%. In the private sector, only 9% of workers today are represented by a union. Whole sectors of industry and services were effectively deunionised. Real wages declined in the order of 25% for most workers by the mid 1990s and have recovered only marginally since. Union membership rates have also failed to recover despite a broad economic recovery from the late-1990s on that resulted in unemployment dropping to under 4% by 2007.
In 1999, a Labour-Alliance government [the Alliance Party was a leftish split
from Labour] changed the law on union rights. While voluntary unionism was left untouched, union organisers regained access to workplaces for the purpose of recruitment. The unions now had the right to pursue multi-employer collective agreements through industrial action. Political and solidarity strikes are still outlawed, and you can only legally take action in the bargaining period. But there are few other limitations. You didn’t have to give notice of strike action to employers unless they were an essential industry or even conduct secret ballots for example (requirements since reintroduced by the current National government). Replacing striking workers with outside scabs was also outlawed.

Campaign to organise the unorganised

A small group of unionists and left-wing activists began a campaign to organise the unorganised in mid-2003. We sought to challenge the notion that it was impossible to reunionise those sectors and that young workers simply weren’t interested in unions…

Read the entire pamphlet at the weblink above.